Hurmu is a country in northern Lyrica, centred around its six Holy Lakes, but with a much larger territory on Apollonia, consisting of the states of Rekozemlje and Lontinien, and the Transprinitican District.

Despite being reunified only in 1690, Hurmu has a long history as a nation. It emerged on the world scene in the late 1400s. It has throughout its history been influenced by, and in one way or another, been part of, Menelmacar, Cranda, Arminy, Shireroth, Safiria, Elwynn, and, most recently, Stormark and Craitland (though the territory of Lakkvia).

For geographical purposes, Hurmu can be divided into Lyrican Hurmu (containing the Lake District and the Southern District), Apollonian Hurmu containing Lontinien, Rekozemlje, and the Warring Islands off the eastern coast of Keltia, and Northern Bretland.

Lyrican Hurmu is hilly. The six Holy Lakes are formed in basins in the terrain. Certain flat lands occur in the Vesüha region – along the east bank of Lake Cashma.

Leafy forests are in Lyrican Hurmu, with almost half of the non-urban land covered in trees. Grasslands and agricultured lands form the rest. The soil in Hurmu is generally quite fertile.

Apollonian Hurmu is generally flat, with some mountains and cliff formations in the far north of the district. Forests are rare, though exist in the far southern regions of the District, and some in the northern regions. The rest of the land is steppe-like and generally not well suited for growing crops.

Lontinien's border to the lawless Green under the process of being demarcated and secured. Lontinien borders, to the north, Lac Glacei, and, to the south, the Apollonian Empire

The River Glacei marks the border between Hurmu (west of it) and Arbor (east of it).

Hurmu expanded in Apollonian Hurmu in 1702 when the Transprinitican District was annexed, thus extending Hurmu from the eastern coast to the western coast of the Eastern Apollonian Subcontinent.

Lyrican Hurmu experiences temperate-to-cold winters and hot summers. The climate is humid. In winter, temperatures below 0 do occur regularly mainly in the inland and highland regions. Lake-effect snow and blizzards occur in the Lake District. The lowest temperature recorded in Hurmu is -32 degrees. Average temperature just after midwinter is -10 degrees. Ice is a common occurrence on the Holy Lakes (except Anset which due to its salinity remains ice-free)

Just after midsummer, the average temperature is around 30 degrees Celsius. Temperatures can go up as far as 44 degrees (record high).

Apollonian Hurmu, in contrast, is mostly dry, with humidity experienced only a few kilometres from the River Glacei banks. Summers remain hot and winters cold. Due to the steppe-like vegetation around Apollonian Hurmu, it is battered with winds. A wind-still day is a rare occurrence. At times, the River Glacei freezes over, but this, too, is rare.

Due to the hilly nature of Lyrican Hurmu, growing crops is restricted to the Vesüha region. However, Hurmudans make use of the rest of the land in many other ways. The main agricultural exports are tea, wool, and goat/sheep products (both dairy and meat). The hills are suitable for growing tea and the grazing of sheep and goats.

In Lontinien, agriculture is mainly restricted to the herding of musk ox, and the use of musk ox felts, meat, and dairy (yogurts are a specialty here). Horses are also common here, and horsemeat and leather is also produced here.

In Rekozemlje, agriculture is more developed, with production of cotton and food crops being the main agricultural businesses.

The wildlife of Apollonian Hurmu is mainly various forms of flowering grasses and other plants. Trees are quite rare, though small pockets of forests exist along the southern areas of Rekozemlje. Bushlands are common along a narrow stretch of land along the River Glacei.

In terms of fauna, Hurmu has a healthy mix of both preying and preyed mammals, such as wolf, fox, lynx, and bear, and various forms of deer and rodents. Dragons, though rare (about 5 sightings every decade), is a dangerous animal that ravishes the land (the young, being more impulsive, are the most dangerous kind). Traditionally, Hurmudans would hunt the dragons down. Young dragons are furry (and not scaly), and the fur of their skin is treated to be like wool, and of which rare and expensive forms of textile are made. About 5000 kg of dragon wool is known to have been produced in the last 300 years, and there are currently only 50 items of clothing known to exist from dragon wool (mainly cloaks and coats, as the fabric is extremely resistant to heat, cold, weather, and fire). In later years, synthetic dragon wool has been produced, with similar properties. These are popular outdoor clothes and fabrics, e.g. also for tents and camping geer. Draken is the largest label producing such fabrics and products. 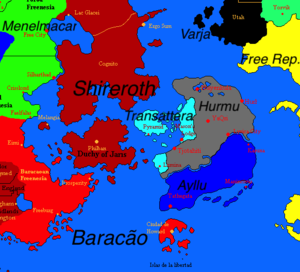 Hurmu after its reduction following the Lyrican Republic's guerrilla war

From 1500 to 1505, the country was part of Shireroth as an Arminian barony. It consisted of two counties, Lake District and Elwynn. While Hurmu was part of Shireroth, four of the lakes were in Shirerithian hands while the other two, Sselm and Anset were under the administration of Stormark.

Immediately after Arminy was admitted to the Empire as a duchy, the Council of the Duchy of Hyperborea decided to lease Elwynn, then a county within Hyperborea, to Arminy. As such, Arminy became the largest duchy in size and the counties of the Lake District (corresponding to the territory of Arminian Hurmu prior to their accession to Shireroth) and Elwynn joined in to form a barony.

The Barony of Hurmu was first headed by Troy Thompson. During his tenure a pilgrimage to Sselm and Anset began, but due to his inactivity, Thompson was removed from office and replaced by Harald. Harald created the Order of the Holy Lakes, from which the Senate of Hurmu descended. One of the first recipients of the Order was Carol, mother of Hypatia Agnesi.

In the end, Arminy seceded from Shireroth, and along went Hurmu with Arminy to go different ways from the rest of Shireroth. Elwynn remained in Shireroth.

As Prince of Hurmu (1512–1527), Rashid developed the law and constitution of Hurmu, reformed the Order of the Holy Lakes, and appointed the Knights and Ladies of it. All members of the Order of Holy Lakes then became Senators of the Lakes, forming Hurmu's first legislature since the fall of the Parlerment. Once the new constitution had been enacted (1527), his son Cashmaiel Andelarion took over the executive power in Hurmu as Chairman of the Senate, and Aoife the Celt was elected Queen of Hurmu.

Organization of the State

Hurmu is organized into four districts: The Lake District, largely covering the area around the Holy Lakes, the Southern District, located immediately south of the Lake District, Lontinien by the River Glacei in Apollonia, and, since 1694, East Barrow Island in the Warring Islands off the coast of Keltia. The districts have considerable autonomy over their internal affairs.

East Barrow Island is under special legislation under the administration of the Hurmu Peace Corps until 1700 AN. This is to ensure a stable transition of power, modernisation of the peninsula's infrastructure, industry and logistics, and provide for for welfare of the inhabitants.

Normally, all laws need to receive a majority of votes in each chamber. Legislation can be introduced in either chamber. Exceptions occur, however, with money bills having to originate in the Assembly (and cannot be amended by the Senate). Another exception is ratification of treaties, which require only the Senate's approval. The Senate is also the collective commander-in-chief.

Hurmu traditionally defines itself as a cultural rather than a military power. Bordered by the Great Apollonian Empire in the west, Arbor in the east, and New Alexandria to the south, there is no realistic prospect of Hurmu matching the armed might of the great powers, while the policy of neutrality precludes membership of either the Raspur Pact or the USSO.

Instead, Hurmu embraces a policy of civic defence whereby, in the event of an invasion, the Hurmu Peace Corps and the Hurmu Constabulary would focus on defending key cities, ports, and airports, as Islands of Resistance, denying their immediate use to the aggressor, whilst providing support to organised elements within civil society that would be called into action to form espionage and sabotage networks and form partisan units ready to rise against the occupier once the prospects for success are favourable.

Hurmu would also seek to resist aggression via diplomatic, economic, and propaganda means, as well as through non-violent forms of resistance as boycotts and strikes.

In peacetime, the state forces of Hurmu, these being primarily the Peace Corps and the Constabulary, can be supplemented by contracted defence partners, both civic and corporate in nature.

The Peace Corps operates under a commission received from the Senate of the Lakes and reports to a Senatorial Committee tasked with its oversight. The Constabulary meanwhile reports to the elected government and is under the authority of a minister appointed by the Prime Minister.

The Hurmudan community can be described as an ethnoreligious group. As such, the religious practices of the community is deeply interlinked with the cultural self-expression of the Hurmudans.