Hakim bin Alsalam (13.X.1682 AN, Hyfrost), known by his titular name Jaaguzan (Babkhi: جایگزین) is the first Shahanshah of Çakaristan and second ruler of Çakaristan. He was elected after the assassination of Akbar and consolidated the Çakar Empire.

At the age of three, Hakim fled with his sisters and parents to the Arbor Isles. There, the Emirate of Arbor began and Hakim lived in the Al Hamra Palace. Later, he lived under an alias in Batavia, where he studied at the Royal Julius Civilis University. Back in Arbor, Hakim started his military training. This was interrupted by his flight to Çakaristan with his brothers and sisters. Under the protection of the Sultan of Çakaristan, Hakim underwent military training in Çakaristan.

After the shameful assassination of his parents, Hakim was proclaimed Emir. He returned and took the lead in the fight against the republic. With initially unofficial support from Çakaristan, he managed to achieve great successes. After the end of the Arboric Civil War, his position as Emir was not certain. The occupying powers did not agree on the restoration of the Emirate. In 1704 AN he was nominated by Amir Çakar as a candidate for the Çakar throne to end the Çakari succession crisis. To his own surprise, he was elected. He was given the titular name Jaaguzan, which means substitute.

With Hakim on the Çakar throne, the chronicles began, called Jaaguzannama, which means Book of Jaaguzan.

On 12.XII.1709, Jaaguzan married Zahra al-Osman, his second cousin once removed. The couple was blessed with the birth of their first child, Aurangzeb, in 1711 AN. According to the marriage contract, he is his father's heir apparent.

By decision of the Majlis al-Shuwraa, the Zenana was set up. It is unknown how many women make up the Zenana. The marriage contract with Zahra also provides for concubines for Jaaguzan. The known concubines are:

By rights Hakim belongs to the following Houses:

In 1703 AN, Hakim became Emir of Arbor after his father was killed. In 1704 AN, he was elected Shahanshah of Çakaristan (King of Kings), whereby the title Padishah-i sharq-u gharb (Master King of the East and the West) was also conferred upon him. In 1706 AN, Jaaguzan was granted the title Qayser (Thraci: قیصر), when Kantisha and Northak Islands were incorporated.

In 1711 AN, he was restored to his father's former title Duke of Brandenburg through the ratification of the Treaty of Raynor's Keep.

Order of the Holy Lakes

Coat of arms in Hurmu 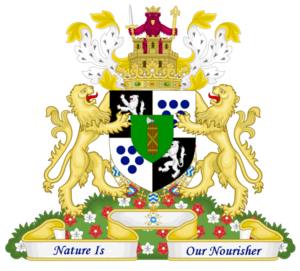 Coat of arms as Prince among the Lakes

In Hurmu, Hakim uses the coat of arms formerly belonging to the Duchy of the Lady Esther Isles and the District of the Warring Islands. This coat of arms originally represented Lady Esther Ayreon-Kalirion, from whom Hakim derives his claim as the most senior heir to her, and Prince among the Lakes in the Line of Daniel Kalirion.

Furthermore, the Warring Islands, which the coat of arms represented, was the hold-out of Hakim's parents after the disposition in Franco-Batavia. As such, Li Naomiai saw it fitting to bestow upon Hakim this coat of arms also for that symbology of his parents' escape and place in those islands. See also Villa Hurmu.

The motto, Nature is our nourisher, is derived from a lecture on Hurmu religion, given by Lady Esther:

The Ash and Elm are important symbolic trees for Hurmudans. In our mythology, the humans came from the holy lakes, but were nourished by these two trees, grew strong and conquered the world. That's why we call all humans "children of Ash and Elm". It's to remind us that nature is our nourisher, like a mother or father, and not our slave.

The coat of arms is surrounded by the collar of the Order of the Two Sacred Rivers, a royal order of chivalry from Elwynn's royal era. This marks the representation of Hakim as the most senior descendant of the former monarchy of Elwynn.

In the Sangunese peerage, he holds the title Count Shishin (since 1703)

Among his ancestors may be found 4 kings of Batavia (Arkadius I, II, III, and IV), one high king of Stormark (Harald), 12 kaisers of Shireroth (Raynor I, II, III, IV, V, VI, VII, VIII, and IX, and Ayreon I, Aurangzeb, and Hjalmar), three princes of Hurmu (Harald, Andelarion, Daniel), as well as four shahanshahs of Babkha (Ardashir I, Ardashir II, Tahmaseb, and Rashid).

He is a 58th-generation descendant of Kaiser Raynor I through the imperial bloodline of Ayreon-Kalirion.