See also the Order of the Holy Lakes 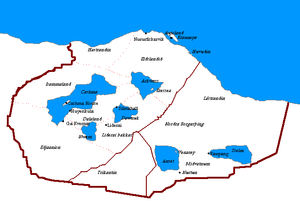 In Hurmu mythology, the lakes were formed by meteor strikes in the prehistoric era. The mythology teaches further that these meteors carried people in them. Some of these people, the few survivors of the impact, walked up the craters and began mourning for their lost friends. Their tears filled Anset, while rain filled the other craters.

Cashma, Kassma in Hurmumol, is the largest and westernmost of the lakes. Its name means "peace". It was given this name after the Peace between the six warring tribes of Hurmu was declared on the Lake's Island (located in the middle of the lake). The island itself was named Cashma Island.

Anset (Hurmumol: "sorrow") is a salt lake, the only saline lake among the Holy Lakes. In Hurmu mythology, Anset is a lake associated with mourning and death. People come here on pilgrimages to mourn their dead ones. Historically, many Hurmu people would bring out their dead to the lake and allow the lake to bury them. Due to the salinity in the waters, the bodies are generally well preserved in the lake. People of fame would more often be cremated, in order to avoid looting, and ashes then spread in the lake. A third group of people, for example Prince Daniel Kalirion, had a Viking funeral on the lake, where they were brought to the centre of the lake in a boat, and then the boat would be set ablaze, and the remains buried in the bottom of the lake.