Kaiser Aurangzeb (Ardashir Piroz Aurangzeb al-Osmani-Steffki), born in Eliria in 1542 in the Elw calendar, died in Tasneemia, 1609, was the 99th Kaiser of Shireroth, ruling for two years, from 1557 to 1559. His brief but bloody reign marked the accession of Hawshire-Dura to Shireroth as a Protectorate and a part of Kildare. He survived a revolt by several of the leading feudal magnates by resorting to a Fabian strategy of avoiding giving battle to the rebels, interspersed with the occasional gratuitous use of illegal weapons of mass-destruction, usually deployed by his ISI henchmen from orbit, against hostile civilian population centres and the Island of Amity (the last instance being for the sake of tradition). Contrary to expectations the Kaiser retained control of Shirekeep until the very end of his reign and was able to retire quietly, and in some considerable luxury, after negotiating the sale of the Mango Throne to his successor the Kaiser Leto III.

In the year of Aurangzeb's birth his father, Ardashir Moqtada al-Osmani, had been declared the successor to Duke Hesan after the latter's unfortunate demise in a shooting at the Lycurgus Club in Ardashirshahr. Some are said to be born with a silver spoon in their mouth's, Aurangzeb by contrast was born on a silver serving set - Nilufar's waters broke during a state banquet in Eliriashahr soon after hearing of Duke Hesan's tragic death - and a blanket set upon a silver tray served as his very first cot, and would remain a treasured family heirloom even when life flung him far from the palaces and places of power to which he was accustomed.

On Aurangzeb there then rested the hopes for a Shirerithian branch of the House of Osman that would achieve a place of honour in Babkha's unofficial overseas empire.

This fortunate life was abruptly brought to a close by the eruption of the Kai Aphmyarkaiph, a Hyperborean led revolt against the Babkhi population after the scale of the Babkhan subterfuge in reducing Shireroth to a vassal of the Shahanshah had been revealed. Without the support of the wider Elwynnese community, in large part alienated by the revelations made by Kaiser Ayreon, the Babkhi fought on bravely but after the destruction of the Elwynnbrigaden at the Second Battle of Vijayanagara the Fedayeen were unable to halt the relentless southwards progress of the Raikothin Paladins. Eliria was abandoned without a fight and by 1543 the Paladins, aided by Elwynnese rebels and Jacobin insurgents from the Imperial County, were converging on Ardashirshahr.

Seeing the futility now of further resistance, Duke Ardashir negotiated with the Imperial Government for exit visas and safe passage for himself and his family. Many other leading nobles and military commanders took their cue from the Duke's flight and fled similarly to the airport and the riverside docks in a frantic effort to escape. With morale collapsing from the top downwards, the remaining Fedayeen forces soon lost their cohesion and began to either surrender or else to merely melt away back into their communities or out into the wilderness. The Babkhi community was completely at the mercy of the conquerors. Fortunately however the Hyperboreans proved to be magnanimous. The Elwynnese may not have been willing to die for the Osmanids but they were equally unwilling to see their neighbours persecuted and uprooted. Save for a few instances where the few remaining Elfinshi sought to take reprisals against their persecutors of 54 years previously, the changes that befell Lesser Zjandaria were nowhere near as severe as they might have been, or indeed as they would have been had a victorious Babkhi militia stormed the settlements of the Raikothin instead. The changes were cosmetic or else largely related to the ruling classes; Ardashirshahr was renamed Tielion Loki, Lesser Zjandaria in time became Alalehzamin and Duke Ardashir was replaced by Duke Yarad, a Hyperborean from the House of Kalir.

Aurangzeb however was returned to Babkha and returned to the ancestral estates of the House of Osman in Greater Zjandaria, the vast arid steppe in the eastern interior of the continent of Eura, and its Satrapan capital - the infamous city of Raspur.

Sale of the Throne

(Collaboration with Daniel Kalirion on the declaration of independence)

Aurangzeb's father, the Khan of Vijayanagara, Ardashir Piroz Moqtada was sent to negotiate with Shirekeep. When Ardashir had a falling out with Lord Erion, that was more extreme than the argument he was having with the Kaiser, Aurangzeb was enraged and vowed revenge. Driving out to the Eliria Aerodrome of the Elwwehr (a precursor to the UDF), he pull rank on the guards and the aerodrome commandant and gained access to the restricted flight area. Abandoning his 'Rollers-Choice' Phantom II in favour of commandeering a Kübelwagen, he then drove out to Hanger 6.

Hanger 6 was the base for Operation Misty-Eyes, a secret Elwynnese plan to kill the Kaiser and his Court, along with most nobles of the Landsraad, by flying a medium bomber filled with high-explosives into Raynor's Keep once the targets had all assembled in that location to negotiate with Elwynnese envoys. The plan had been shelved in favour of actual negotiations but the flying bomb remained fuelled and ready in its hanger.

The flying bomb itself was a composite aircraft formed of two parts; the first small piloted control aircraft mounted above a large explosives-carrying drone. The drone was a converted medium bomber whose entire nose-located crew compartment had been replaced by a specially designed nose filled with a large load of explosives, formed into a shaped charge. The pilot aircraft, a propeller driven light-attack plane, was attached to the flying bomb by struts and metal harness, held in place by a release mechanism of ball joints with explosive bolts that the pilot would activate in the same manner as though he was releasing a normal bomb. The unmanned bomber would be released to hit its target and explode, leaving the fighter free to return to base.

Aurangzeb drove up to the hanger and walked in demanding to take command of the aircraft, claiming that Yardistani terrorists had wiped out the Elwynnese delegation. Misty-Eyes was therefore going to be implemented before the Kaiser and his cronies had time to disperse. When the duty pilot of 671 Squadron protested that this was his mission and that he needed official orders, Aurangzeb struck him across the face and angrily exclaimed that his father had been the envoy and that it was his duty as son to avenge him. When the pilot continued to protest that it was improper to launch the strike without authorisation, Aurangzeb denounced him as a traitor and shot him dead on the spot. There were no further objections from the flight crews.

The Mistel, with Aurangzeb in the cockpit of the pilot aicraft, was taxied out of the hanger, fuelled for the long flight to Shirekeep, and airborne before reports of the theft of the flying bomb had reached the ears of anyone who might have realised the severity of the threat. As it was, the security forces loyal to the Patron of Kalir were under the belief that Aurangzeb had gone rogue and was planning to launch a strike on Shirekeep. None guessed his true destination. After he ignored orders to return to base, instructions were given that aircraft were to be scrambled to intercept him, by ramming if necessary, to prevent the Mistel from coming into range of Shirekeep. As it was however the interceptors were being vectored towards a projected flight path, along the White Elwynn, that did not correspond with reality.

Once Aurangzeb was 8 kilometres east-southeast of Eliria, he made made a 330-degree turn at the end of which saw his aircraft descending through down to 2,500 feet in a shallow accelerating dive towards downtown Eliria, with the throttle thrown to maximum. At 1,600 feet, with the aircraft pointed toward the now visible Congress Hall, Aurangzeb released the flying bomb and pulled his, now separated, pilot aircraft sharply out of the dive.

The flying bomb continued its terminal descent, in a the shallow dive above the ground that was now sufficiently low for the wings of the aircraft to knock over a half dozen street lampposts before slamming into the side of the Congress Building at a speed of 853 kilometres per hour. The bomb struck on the second floor which housed the records of the Congress. The nose cone of the aircraft contained a shaped charge of nearly two tonnes of Torpex fitted with a copper or aluminium liner with the weight of a blockbuster bomb. The use of a shaped charge was expected to allow penetration of up to seven meters of reinforced concrete. The brick built Congress had no chance of surviving such a blast as which now tore it open. The aviation fuel contained in the aircraft for the long flight to Shirekeep added to the dreadful conflagration, which enveloped the Congress in a ball of fire.

The destruction wrought upon the spiritual and political headquarters of the independence movement was absolute. In the chaos and confusion that ensued, Aurangzeb was able to coax his single engined fighter to an airstrip in the Osmani feudal holdings outside Vijayanagara. Afterwards he was obliged immediately to go to ground, as for that moment he was easily the most hated man on Benacia, if not on all of Micras, whilst harassed and perplexed SAVAK agents struggled to find a safe way to get the most loathed Babkhan out of a country that was falling a part and where any gentleman of a Euran complexion risked violent death from a multitude of hands. 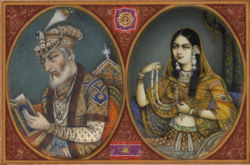 The lingering effects of the scandal embittered the Emir of Raspur towards his cousin to the extent that when correspondence was begun in 1581 with a view to establishing a rapprochement between Babkha and independent Elwynn that the offer was made to present the Elwynnese with Aurangzeb's head on a plate by way of reparation. Fortunately for Aurangzeb, this was declined in favour of a formal apology. Nonetheless, it marked a prudent moment to depart the Kingdom in favour of safer climes.

Perhaps counter-intuitively the titular Khan of Vijayanagara elected to relocate his family to the independent Elwynnese Union.

President of the Senate of Elwynn

Emigration to Flaventia and Death

Aurangzeb's father, Ardashir Moqtada al-Osmani, declared himself Khan of Vijayanagara in 1534 as an honorific title associated with being Count of the tripartite county of Lesser Zjandaria. After his father perished in the Euran Apocalypse of 1598, Aurangzeb was able to inherit the title of Khan of Vijayanagara. Although in the context of the times this was a title of little weight, the succession was considered important by Osmanid loyalists in Elwynn and amongst the refugee diaspora.

The impossibility of return to Elwynn whilst it was under the rule of the Usurper Loki meant that Aurangzeb was obliged to seek exile abroad. Aurangzeb, embittered by the destruction of his homeland and losing political power in Elwynn, retired to Natopia where he lived anonymously in the Demesne of Tasneemia until his death, from a stroke, in 1609. He was buried in an unmarked paupers grave in Apis of the Cedars.

The treasure he looted from the chancelleries of three empires, and supplemented with the proceeds of the sale of the Mango Throne to his successor, have never been found or accounted for. Some believe that this hoard finances the nefarious misdeeds of his son Tokaray al-Osman.