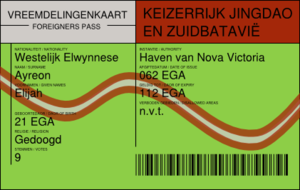 "As viscount of Barbary, I promise that I will defend my new fatherland, the Grand Duchy of South Batavia against foreign and domestic enemies, and at all cost. That I feel the rage of Germania flowing in my veins and that I will pour this rage over the enemies of South Batavia. I will defend the Holy Church of Cato and I will serve the Grand Duke."

Historians sometimes dispute that this oath was fully upheld.