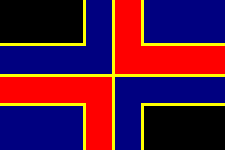 The Flag of Goldshire

Goldshire is the second of the two original Duchies of Shireroth. It flourished for three years before becoming a part of Brookshire during the reign of Kaiser Ari i.

Goldshire, along with Brookshire, was one of the two original Duchies of Shireroth. Its original Duke was Lukedu; after he left it was given to Tony Au. Original maps showed the area west of Goldshire to be Northshire; in summer 2001 it became the Duchy of Elwynn. Goldshire was given to Menelmacari Jadie Doran when she joined Shireroth as a wedding present, Au having been long since gone; her first husband, Jason Steffke, was therefore honorary Duke. During this period, Eriana Moon created Goldshire's Barony of Lunaris. When Jadie remarried Zarathustra Erutirn, he became Duke of Goldshire; due to differences between him and Baroness Moon, Lunaris was traded for the Kitanus Fields. When both Jadie and Zary went inactive, the Duchy gradually became empty, and was merged with Brookshire in the Duchy Rearrangement Act during the time of Kaiser Ari i and Steward Scott Alexander. Subsequently, it was a County within Brookshire, whose leader was also the Steward of Brookshire. With the Feudal Reorganisation put in place by Kaiser Yarad it has ceased to exist as an entity.

In the fictional histories of SSHIT, Goldshire was originally the great opponent of Brookshire and of Kaiser Raynor I, but was conquered in the Battle of Shirekeep. However, Goldshire never developed a very coherent fictional culture of its own. Duchess Jadie occasionally mentioned it as being inhabited by elves, or cats, or elf cats, and its palace was at one point a treehouse. Duke Zarathustra went further, creating the Florenet society of warriors and a detailed description of the County of Lombardia, but neither of these expanded Goldshire as a whole very much.

Goldshire was rec-invaded a few times, especially by other Duchies seeking to claim it after it became inactive. The invasion of Ric Lyon of Elwynn was the most successful, since at that time it was defended only by Hypatia's Mom

During the Shirerithian Civil War it was assaulted by a force of Báatharz paratroopers sent by Ardashir Khan to assist the regime in Shirekeep by preventing Goldshire from sending its forces to assist the rebellion in Brookshire. In this sense the mission was a success though it should be noted that the paratroopers were massacred to a man by the Florenet guards of the palace.

Goldshire is named for its vast resources of gold, which were exploited and desired by virtually all the great ancient empires. Treesians (or perhaps Five Islanders) in the area believed it was inhabited by elves, giving the Elwynn River its name. Khaz Modanians definitely reached Goldshire Hamlet at least, and remnants of their mine shafts dot the landscapes. Even some of the tribes of the area that would later become Audentior and Automatica set up little fiefdoms to try and get at the area??s mineral wealth, as did the Istvanistanis. With such foreign influence, the Goldshire natives never had the opportunity to develop an empire or even a strong culture. They were usually used as cheap labor by the foreigners or worked in widely spread fields as peasant farmers. By the time of the Kaisers, they were beginning to resent this, and when conflicts with the Treesians led Nicolas II to invade, the Goldshire natives welcomed the control of the southerners as a liberation and rose up to support them. As such, the Kaisers received pretty much the entire area in a single twelve-year campaign, although the Istvanistani portions in the far west held out a while longer. The patchwork of different cities and fiefdoms was incredibly confusing, and so Kaiser Raynor VII reorganized it into its current counties, and razed a few cities to make room for new ones. For the capital of the region, he chose an old Treesian town, the greatest of the mining colonies, and spent vast sums of money creating what he called Goldshire City. Unfortunately, the vision of a great metropolis never really panned out due to the Goldshirerothians rural nature, and the city became known, jokingly at first, and then officially, as Goldshire Hamlet. Because the natives petitioned very strongly for home rule, Kaiser Daniel II created the Ducal system and appointed Cerno Au, once a Shirerothian partisan against the colonists in Nicolas?? campaign, as the first Duke of Goldshire. (from the Goldshire blurb by Kaiser Los I).

Goldshire is north of Brookshire on the MCS Map, and bounded by the Elwynn River. It is full of gold mines, though most of them were depleted in prehistoric times save newer operations in the northern county of Suthergold. The capital is Goldshire Hamlet.