The Sovereign Confederation's Autonomous Republic, previously an independent country under the name of Sovereign Confederation of Suthergold, Norestria, and Holwinn, is an autonomous republic within the Elwynnese Republic. Founded as a so-called "vulture state" in Benacia in 1671 by Ryker 001, the original copy of Ryker Everstone in his postmortem phase of existence, it has since 1681 been an Elwynnese autonomous republic. It controls Suthergold and Wintergleam.

A constitutional paternal autocracy, modelled off the Natopian system, augmented by a long forgotten programming system known as Robocracy, is to be established for the new Confederation. Its legislature, the Parliament of DARA, is composed of digital profile representatives synthesized by AI from the electoral preferences of each of the Confederation's two-hundred electoral districts. DARA in turn appoints a biological human as Systems Operator (SysOps), to perform the function of presiding officer via a neural interface. To make the function of the office more palatable for the biological organisms subject to the rule of DARA the post of SysOps is publicly known as the Speaker. The Speaker then appoints a cabinet of Ministers for various portfolios, including security, immigration, and national development.

Various copies of Ryker OS officially handle foreign affairs, judicial courts, and the military by appointing Advisory Secretaries to these offices and acting directly through them. In situations such that the OS might not be able to function at its ideal capacity, it would nominate a Regent on advice of the Speaker, interpreting the will of DARA, to fulfill the requirements of the OS. The Regent would sit on the supreme court, set diplomatic policy, and command the Sovereign League of Defence and Deterrence at the pleasure of the OS.

The government of the Sovereign Confederation is structured to allow a federal system without falling into the same quagmires as the Federal Era of Shireroth. The three entities making up the confederation are Norestria (formerly the eastern half of the Countship of Suthergold) which is ruled over by the New Committee of Overnumismators (modeled after the original Assayer organization's hierarchy); Sutehrgold, a federation of historic Goldendown and Central Wintergleam governed directly by the Speaker; and Holwinn, governed by the Count of Holwinn. On external matters of government, the Parliament of DARA is given executive privilege subject to review by the Overnumismator Eminent and the Count of Holwinn, Chairs of the Soveriegn Committee.

Shortly after the disappearance of King Ryker Everstone, most of his financially exorbitant projects were placed on hold or abandoned. The ensuing years of decaying order and two partitions left much of Goldshire disillusioned with the national exceptionalism touted by their off-and-on leader and allowed for an environment of apathy and stagnation. as the years wore on, however, and more and more fuctions of government fell subject to mismanagement and corruption, a sense of nostalgia for the more rigid days of a heavily armed Goldshire took hold of populations in more developed regions. This wave of sentimentality for law and order first took hold in Elsenar under the Iron Company and later very suddenly in Suthergold and the region surrounding Ketsire in Wintergleam under one Doir Jen Mera, who claimed to be the daughter and voice of Ryker Everstone.

Since it's independence and finalisation of borders with neighbouring states, the Sovereign Confederation has reorganized itself into 38 Bailiwicks along historic and ethnocultural lines among its confederated Governorates. 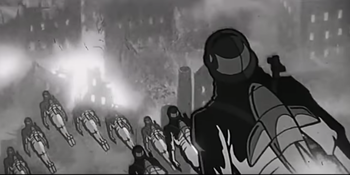 Screen-grab from a propaganda video expounding upon the doctrine and methodology of the SLDD (circa 1671 AN). The actual level of attainment on the part of the organization may at present fall some way short of this ideal. 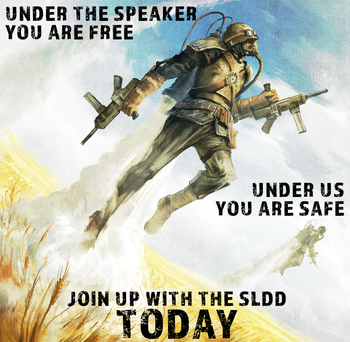 Poster from a recruitment campaign to bolster the SLDD following the incorporation of Holwinn and occupation of Stonetree (circa 1674 AN).

Founded as the Sovereign League of Defense and Deterrence, a successor to the Defender's League of Suthergold, the Sovereign Defence Force (SDF) envisaged as itself relying heavily upon personal jet propulsion devices and a growing number of autonomous converted armour divisions coordinated remotely by the OS. For the present it remains a self-defence force operating with surplus equipment inherited from the local and imperial garrisons in the area now under its control. By pledging its continued allegiance to the Raspur Pact the Sovereign Confederation benefits from being able to draw upon the resources and personnel of allied forces on the continent.

After being somewhat nonplussed by the SLDD's predilection for short range tactical jet packs and distinctly iffy about the idea of a sentient algorithm constructed from the disintegrating consciousness of a dead sovereign, Benacia Command at last felt that it had discovered a niche into which SLDD fighters could be safely incorporated without occasioning too much mayhem on the allied-side of the lines. In 1677 a cohort of jet-packed equipped volunteers, rechristened as "Shock-Troopers" for the occasion, were dispatched by the Speaker as a gift to her daughter. These, after a demonstration and flypast staged before Selardi and the Ransenari court at Goldfield, were attached to the Uihmanz Lunaris tasked with enforcing the quarantine against the Guttuli Protectorate.

Based on the experiences of this detachment, the SLDD was reorganized into the SDF in 1678, leveraging the the knowledge thus acquired to develop a force-wide specialisation in air-land warfare. As such the SDF's primary contribution to the allied forces of the Pact is the First Airborne Army.

The divisions of the First Airborne Army comprise of regiments trained for light infantry operations, the differentiation between them being the mode by which they are conveyed into battle - the 6th Air-Landing Division consisting of glider-borne troops, the 7th Parachute Division being as the name suggests formed of parachutists, whilst the 11th Airborne Division specialised in helicopter-borne air assault operations. The Special Service Commando Group meanwhile inherited the "shocktrooper" traditions of the SLDD by continuing with the use of jet-packs for individual battlefield manoeuvrability and specialist missions.

In addition to the units contributed to the allied forces in theatre, the SDF also maintains a combined arms corps formed of three territorial defence divisions, an area defence division (specialising in ground based air defence), and an armoured brigade consisting of eight tank regiments, for the purpose of home defence.

The Sovereign Confederation sees itself as a successor to the Kingdom of Goldhire and protector of its former dominion and citiznes. The legacy of Ryker's time as Count, Duke, and King over the region gives Speaker Jen Mera a large base of support even in the newly acquired state of Holwinn. The restoration and legitimization of the Assayers in Norestria is a controversial move, though it is simply considered a formality by many in the new state. The population of Central Wintergleam has given a mixed reception to the southern government but it is largely popular in Ketsire where companies such as Ketek are once again employing large portions of the working class and recent moves to incorporate ethnically Wintergleamish parts of Suthergold have lead to a substantial uptick in support for Kingsgate. Holwinn, long a region ruled over from a distance, has been given a more traditionally Autocratic and feudal structure to govern with. A comfort to many and stabilizing factor for a region which would threaten to overextend Kingsgate's forces if a more centralized state were established so early.

It might be said, with some degree of justification, that the "decanting" of an electronic facsimile of the the dead King's cognitive function into a simulated recreation of the late sovereign's synapses, neural pathways, along with the electrochemical activity that animated the same, is a concept that has proven difficult for the authorities to explain and far harder for the average folk of the former-Goldshire to readily comprehend. With reactions, outside of the cognitive elite who fancy themselves as understanding the nuances of the situation far better than they actually do, reactions to the digitised sovereign amongst lay folk has ranged from mocking derision to outraged violence, sometimes running the full gamut in the course of a single conversation. It was fortunate that the Elwynnese aggression occurred when it did or else the Goldshirian and Suthergolder population of the territories claimed by the Sovereign Confederation might have been united against the government rather than in support of it. As it was, hatred and revulsion felt at the perfidy of the Elw trumped the hatred and revulsion felt at the desecration of the late King's memory by his "cyberisation".

As the conflict with Elwynn reached its awkward, Raspur Pact brokered, conclusion, it became apparent to the government of the Sovereign Confederation that the people, to say nothing of the business community and thoroughly befuddled diplomatic corps, required the reassurance of a human interlocutor with sufficient authority to speak on behalf of the Sovereign Confederation. These considerations, combined with a period of planned maintenance for the primary Ryker Operating System, brought Speaker Jen Mera to the fore as if not a de facto leader then at least certainly a spokeswoman who enjoyed licence to give answers that were authoritatively binding off her own initiative.

As for the Ryker OS itself, it proved necessary to introduce an element of obfuscating mysticism to console and sooth the jarred, credulous, nerves of a rural populace who had hitherto been prone to ascribing anything outside of their - admittedly limited - experience to heresy and daemonic possession. Administrative and technical jargon regarding operating systems and decanting were quietly dropped in favour of a more elevating emphasis on the late King's "ascension". Whilst no-one would go so far as to straight out claim that the "Ever-Watching King" had attained apotheosis, the fact that his name would henceforth only be mentioned in conjunction with "the higher planes of thought" and "elevated consciousness", across all forms of government communication and propaganda, meant that the "Heaven Sent Sovereign" would increasingly be associated Mors, Viviantia, and the Celestial Temple in the realm of the hereafter.