The Benacian Union is an economic, military, and political union between four sovereign nations, Elluenuueq, the Realm of Ransenar, the Sovereign Confederation of Governorates, and the Unified Governorates of Benacia. The Free City of Chryse, where the organisation maintains its headquarters, was a free Elwynnese bailiwick and governorate before becoming a realm in its own right, serves as the capital of the union-state. Established in the chaotic aftermath of the Second Elwynnese Civil War, the union is controlled by the victors of that conflict, these being Benacia Command of the Raspur Pact, the ESB Group, and the Nationalist and Humanist Party.

The Benacian Union was a somewhat unusual entity in that it consciously rejected "constitutionalism" from its inception in 1698 AN, instead holding that the law is "whatever the circumstances of a particular given moment require". Whilst a system for the rule of law would eventually solidify around the Charter of the Benacian Union and the Union Covenant, the powers of the Congress of Chryse remain ultimately untrammelled.

The territories formed into the modern Benacian Union were vast, amounting to almost two thirds of the territories of old Shireroth. This assemblage of nations, governorates, provinces, cities, and bailiwicks, always required a firm hand; in the form of rigid control, defence, and expansion. The Benacian Union Defence Force, formed from the Black Legions and the loyalist cadres of the Elwynnese Union Defence Force, represented a state-of-the-art killing machine that deployed extremes of brutality and horror when lessons needed to be taught, or offences punished. The Guild of Magisters-Carnifex, embedded into every bailiwick, made windows into the souls of men, and poured out torments undreamt of onto the heads of any who faltered in their adherence to the Union Covenant. Their unabashed accounts of campaigns and expeditions reveled in the ecstacies of relentless slaughter. The records of enemies killed, wealth appropriated, and populations placed under the yoke, was the delight of the lords of Benacia now that they had come into their own. Yet their desire was not sated with conquest, indeed the great work of government, as it was termed, revolved around the slow grinding down of the subject nations, and their steady digestion in such a manner that the value of their labour was extracted, and that the generations that would be born after them would be readily indoctrinated into the Archonic precepts of Humanism and the worship of the Highest Divinity.

The twin pillars of the constitutional order are the Charter of the Benacian Union, which mandates the institutions of the Union-State and their mutually interdependent relationships in the Coordinated State, and the Union Covenant which binds all subjects together in a community of the realm which constitutes the Harmonious Society, without which the coordinated state cannot function. Both components are manifestations of the ideology of Humanism.

The powers of the Benacian Union are exercised by three hybrid executive-legislative bodies:

Of these the Congress of Chryse enjoys paramountcy, having unlimited powers of purgation over the High Presidium and the Chamber of Guilds and Corporations.

The purpose of the Union-State

The Benacian Union is run for the benefit of the victors of the Second Elwynnese Civil War, namely the Honourable Company, the Nationalist & Humanist Party, and the Raspur Pact. The concept of citizenship in the Benacian Union therefore does not exist, as all are subjects are bound into service of the victors and grouped for this purpose into three broad categories:

To be considered meritorious a subject would have to be employed in the service of the Honourable Company, to have attained rank in the Benacian Union Defence Force, be enrolled in the cadres of the N&H, or else, at the minimum, to have been accepted as an apprentice into a civic, religious, or guild institution that has been legitimated by authority. Amongst the benefits of being a meritorious subject are the rights to travel between bailiwicks, to seek employment outside of the bailiwick of residence, to apply for exit visas for international travel, and to receive enhanced rations beyond the basic levels of universal provision. The privileges accorded vary from institution to institution and increase in increments as the meritorious subject advances up the Table of Grades and Ranks of the Benacian Union.

In theory every subject, in order to participate in the economic and political life of the Benacian Union, must be enrolled with a guild or one of the corporations represented in the Chamber of Guilds and Corporations. However a significant part of the present population falls outside of the present system of advancement - these being the subjects without merit who fall into two distinct subcategories, children and bondsmen. Children, particularly who lack the benefits of a patron, receive the benefits of a public education up to the age of sixteen (thirteen in Elluenuueq), whereupon they are brought forward for auction in their bailiwicks of residence to the representatives of the guilds and corporations. In most instances the BUDF takes the first cut of manpower for apprentice-soldiers leaving the liveried companies of the guilds to compete with the churches and the civil executive for the remainder. The Honourable Company, its requirements for Honoured Sons being already oversubscribed, tends not to participate in the competitive auction process. Those who are passed over at the auction stage, or who for political, linguistic, or cultural reasons were refused enrolment into the guilds at the instantiation of the Harmonious Society after the war, would default to being the bondsmen of the municipal corporations of the bailiwicks in which they reside, and which they are not permitted to depart from except by the expressed permission of the local authorities. Bondsmen are in effect municipal serfs, available for whatever work task the bailiwick deems appropriate or necessary. The services of a bondsman may be hired out by the municipal corporation of a bailiwick but the remuneration of the bondsman's labour is paid directly to the bailiwick by the hiring party rather than to the individual, who instead only receives his basic ration allocation. In theory no obstacle exists to a bondsman acquiring merit by being accepted into service by a lawful entity, however in practice a bondsman is doubly disadvantaged by whatever factor caused him to be overlooked in the first instance and by being in competition with the annual intake of children competing for apprenticeship places. Additionally bondsmen run a heightened risk of coming to the attention of the Cull Commission active in their bailiwick.

The final category - of protected person - is reserved for those who have fallen afoul of the law or have failed to abide by the manifest obligations of the Union Covenant. These people are protected in the sense that the sentences of imprisonment or death which otherwise might hang over them have been commuted in favour of equivalent or whole-life periods of service in the Benacian Labour Reserve. For those whom service in the Benacian Labour Reserve is a reprieve from a custodial or capital sentence toil forever under the threat of being recalled to complete their original sentence in its given form. A protected person who completes his term in the labour reserve is theoretically rehabilitated to society - returning to the bailiwick from whence he originally hailed. However one who returns does so without any of their former standing, for they have forfeited whatever grade and rank of merit they might have acquired hitherto - they face living the remainder of their life as bondsmen, with the record of their past misdemeanours effectively ending whatever chance they might have had of recovering lost merit through service.

Within the realm of Ransenar however, the condition of merit was bestowed upon all subjects at its accession into the Benacian Union, under the favourable terms negotiated which ensured that the realm would continue to operate a democratic system of self-governance whilst adhering to the terms of the Charter of the Benacian Union and the Union Covenant.

The Benacian Union has a complex administrative structure, with several layers of government and various institutions that exercise different powers and responsibilities. At the top of the hierarchy is the Congress of Chryse, which serves as the supreme legislative and executive body of the Union. The Congress is divided into two branches: the High Presidium of the Benacian Union, which handles defense, economic affairs, foreign policy, and security, and the Chamber of Guilds and Corporations, which is responsible for public administration.

Overall, the Benacian Union has a highly centralized and authoritarian government, with a complex administrative structure and multiple layers of bureaucracy.

The security doctrine of the Benacian Union rests upon a system of concentric containment, ensuring that there exists no single point within the entire hierarchy of the Union-State where sufficient strength resides to overturn the ruling system installed after the Second Elwynnese Civil War, even the Magisters-Carnifex, with their unlimited powers of purgation, are subordinate to the Congress of Chryse and could be crushed by the Benacian Union Defence Force and the Commission for the Panopticon if they pushed their remit too far, and these countervailing forces are likewise checked by each other. With society partitioned into compartmentalised bailiwicks and guilds, and all subjected to totalising forms of surveillance, the prevailing theory is that no individual or institution will be able to organise sufficiently to pose a threat to the system without first being identified, isolated, and suppressed by local forces.

In 1703 AN the former site of the Micras Treaty Organisation in Chryse was generously donated by the city to the Union-State for its use in perpetuity as the site of its headquarters. 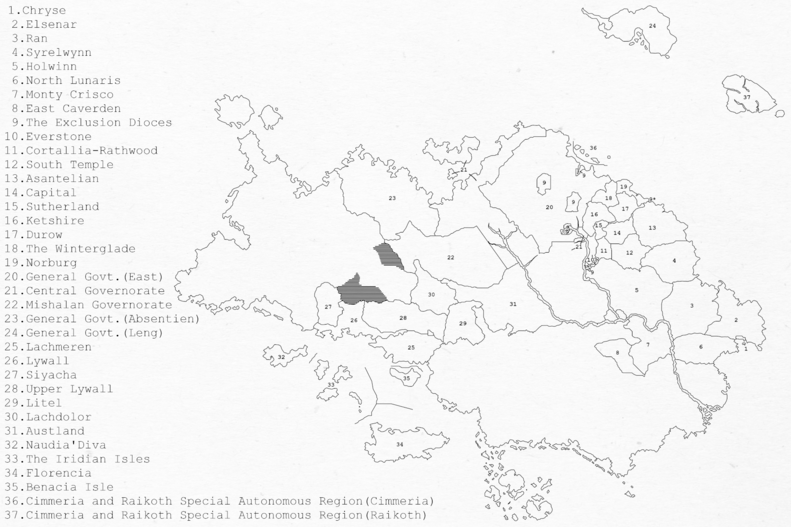 The continental governorates of the BU in 1711