The Union of the Republics of Zeed (Ruthenian: Союз Зеедских Республик, Soyuz Zeyedskikh Respublik; Babkhi: Иттиҳоди Ҷумҳуриҳои Сайидии, Ittihodi Çumhurihoji Sayidii) or more often simply as Zeed, is located in south-western region of the continent of Eura. A Humanist multi-ethnic state, Zeed was founded out of the remnants of the Empire of Zeed - itself the product of an ethnic conglomeration of many of the former peoples of Babkha and the post-nuclear horror, nominally headed by the Ruthenian ethnic group. Following the Rokhpin Revolution, Zeed was transformed into a federative Union of relatively autonomous republics, each one largely comprising of a separate ethnic group or similarly related groups facilitating their need for such an autonomous region within the Union. Incredibly diverse in history and ethnicity, Zeed is a microcosm of the ancient realms which once inhabited its parent continent, leading to the necessity of the unique form of democracy the people enjoy today.

Zeed was characterised, prior to the Third Euran War as socialist due to its laws stating that land could not be owned. Subsequently the title to the land of Zeed was reframed by the declaration of right, made in 1702 AN, so that the use of the land and any natural resources found therein was on a leasehold concessionary basis - granted by the state. It is accordingly necessary for private corporations, in order to thrive, to form mutually beneficial and reciprocal relations with the state.

The Allied Control Commission, established under Zeed Directive 2, exercises executive power over the ministries and departments of Zeed in consequence of the capitulation of the Union of Republics in 1701 AN.

General Secretary of the Union of the Republics

In centuries past, the Ruthenian people and their lands were largely referred to as Seyyedi - roughly translating as "distinguished peoples" in colloquial Babki by the various Babkhan tribes. A noted Osmanid Khan and explorer, Arshahma al-Osmani Khan, noted in his diaries -

Their complexion was of a bit fairer tones than our own, with no uniform hue of hair - brown, blonde and even black hued hair could be seen among every strata of their society. All were well-groomed, their long locks of hair clean and perfumed, as was their skin. I can only attribute this to their almost religious use of bath houses - what they refer to as banya. The fabrics in which they clothed themselves in were plain, but they belied craftsmanship worthy of a Shah. It is this craftsmanship that I have sought such interactions with these tribes. They are uniquely distinguished among the barbarians of these open lands.
—Diaries of Arshahma al-Osmani Khan, Undated

However, through the centuries and Babkhan expansion throughout Eura, Ruthenians saw themselves slowly integrated into the Harmonious Society at varying levels. This eventually lead to a concept of those with Ruthenian ethnic backgrounds being known as Seyyedic people in the more archaic Babki dialects. This eventually saw the use of the ethnonym Zeedic come into common use in the modern tongues. With so much of Babkhan cultural an linguistic influences still being very much present in the Union's predecessor state - The Empire of Zeed - it was natural that the use of Zeed is as a concept of the people and the nationhood.

The constituent Republics of the Union are what make of the primary subdivisions of the nation. Each one is an ethnic, linguistic, or historical region - solidified into a largely self-governing province. Each Republic is granted a seat in The All-Union Presidium of the Republics, the legislative body of the Union. This comprises the representation of the uniquely diverse population of the nation to the national government under the concept of self-governance uniquely suited to the constituent people, unifying and working together towards the common good of the nation - one of the core tenants of the Union. 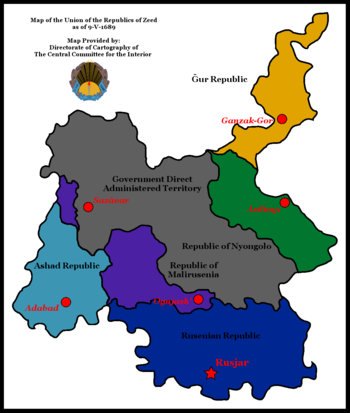 As of 17 Nawruz 1689, the Union comprises of five autonomous republics, Ashad Republic, Ḡur Republic, Republic of Malirusenia, Republic of Nyongolo and the Ruthenian Republic. However, conflicts have still raged on, and no set borders have yet to be official decided or considered internally recognized. In 1693 the Republic of Garujulia was formed. The Ghur Republic was however ceded to the Suren after the Third Euran War. 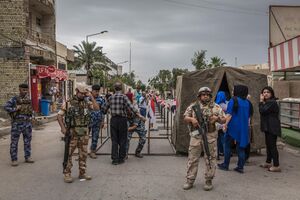 Locals in an ethnically Raspurid region of the Union take to the election poles. Local Raspurid militias ensuring the safety of the voters can be seen all around, as several acts of violence occurred only days prior - 1 Kanam 1688

Despite the ongoing Interim Conflicts, on 13 Kanam 1688, Vladim Timoshenko was elected the first First Secretary of the Union by an overwhelming majority of the populace. Even as several internal conflicts raged on in many areas of the Union as the republics solidified themselves, there were reports of nearly a ninety-nine (99) percent voter turnout. With the election of the national and revolutionary hero, the hopes of the solidification of all the republics within a year was becoming more realistic.

Several foreign observer organizations falsely reported the use of armed pro-Revolutionary militias as swaying and even intimidating Zeedic citizens. These accusations were directly contradicted by Timoshenko in a later press conference, reminding the international world that there were still many violent clashes between the new and legitimate government and factions which opposed the instalment of a truly democratic society. Front militias were used solely as protection against potential violence that could have been done towards the people of the new democratic Zeed voting in a their first new First Secretary.

Following the surprise decision of Vladim Timoshenko to retire on grounds of ill-health, the Revolutionary Council organised fresh elections to chose a successor. The election was suspended after Rashid Hasanzadeh received the endorsement of his sole opponent. The decision of the Revolutionary Council and the Party to select Rashid was put to the citizenry in a subsequent plebiscite - with a 98% vote in favour.

The political atmosphere of the Union was very complex. The national government reserveed certain powers for itself in its national constitution, with almost all other powers delegated to the autonomous republics. It explicitly explicitly mentions,

Article 2 - The sovereignty of the republics is limited only within the provisions set forth in this Constitution. Outside of these provisions, each republic exercises state authority independently.
—1688 Constitution of the Union, ~

Coupled with the general policy of "ethnic and regional autonomy" as practiced by First Secretary Timoshenko, while it is a cohesive nation united under common principles, the general atmosphere and governance of each republic is nearly identical to an independent nation. There are approximately 19 powers which the national government reserves the right to exercise, all of which deal with foreign relations and trade, national security and internal economics. This is very evident when looking at the Ḡur Republic, as their own internal factions have struggled with conflicts long since before the Union. However, as they are largely part of the concept of ethnic and regional autonomy - and the fact that these small scale skirmishes do not directly effect national security - they are ignored.

This very unique system of both law and policy has, however, created a very strong sense of national unity. This is because of the general consensus that the national government exists for their benefit. The ideologies of the All-Union Revolutionary Front and the Nationalist and Humanist Party, by nature, create a greater sense of purpose for the multi-ethnic state. This is directly reflected in the All-Union Presidium of the Republics - the national legislature.

The Presidium was, as defined in the constitution, the legislature of the Union. A simple-majority, unicameral body of government where each of the leaders of the autonomous republics meet. This is where the individual governments of the republics meet the national government of the Union. Referendums are proposed, voted on and submitted to the Supreme Council for evaluation to either be passed into national law or be vetoed. As such, the Presidium could be considered the direct method of communication between the people of the Union and the Supreme Council.

As a new emerging country on the international scene, Zeed did not have much experience on the diplomatic scene. Its analogue to a foreign minister, initially the notorious Rashid Hasanzadeh, Secretary of the Central Committee of Foreign Relations, made this limitation painfully clear with his erratic interventions on the international stage. It was however a party to the Fontainebleau Accords and a member of the Euran Economic Community thereby.

Although its relations with the Raspur Pact up and to early 1693 AN were close and cooperative, surprised its friends in the Raspur Pact on 15.II.1693 AN when it recognised the Republic of Elwynn and Amokolia and the Republic of Tarrland as sovereign entities. Rashid Hasanzadeh, first secretary, announced that Zeed felt solidarity with the revolutionary struggle with these two new countries, and that Zeed would support them at all costs. "We too know what subjugation feels, and how glorious it is when one casts off one's chains", Hasanzadeh added.

It remains cordial with Hurmu, with an embassy in Vesüha and a consulate in Ghawlama. Hurmu has an embassy in Rusjar. There is a Hurmu–Zeed Friendship Society in both countries.

Zeed established relations with Calbion in 1693, and began negotiating the purchase of Calbain military equipment, as well as ships.

In 1694, following the Tarr genocide in Kaamiozyr/Tarrland, Zeed announced, with the support of the Republic of Tarrland government-in-exile in Rusjar, that it would from now on assume the role of protecting power for Tarrland on the international scene. As such, all Republic of Tarrland passports would be stamped with a note from the Government of Zeed saying that this person is a protected person of Zeed. As such, Tarrland passport holders have the same prerogatives as Zeedic citizens.

Red Konil (XII.1696) was a lawful reorganization of the Government of the Union of the Republics of Zeed in light of the absence and inability of Rashid Hasanzadeh, Hero of the Revolution, to exercise his powers and duties, resulting in Sergey Ilych Chernavyin taking office as Chairman of the Supreme Council and Premier Secretary of the Union.

This action resulted in full activation and deployment of the Popular Mobilisation Brigades and the Committees of Public Safety in order to meet the existing counterrevolutionary threat. With most men of military age being called up for service under the Popular Mobilisation Brigades, Chairman and Premier Secretary and the government mandated the establishment of the voluntary People's Druzhina, also known as the Volunteers, patterned after their Elluenuueq counterpart. They would assist in ensuring public order and safety, and serve as a final reserve in the event of continued enemy advance into the territories of the Union.