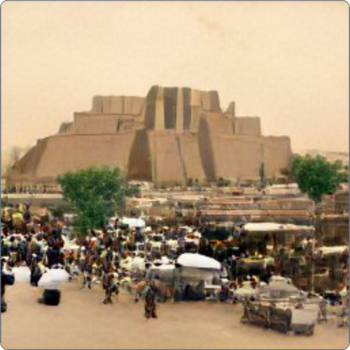 The main bazaar of Mehrshahr, situated with the ruins of a late-era Babkhan ziggurat in the background.

The city of Mehrshahr, situated amidst the ruins of the ancient Babkhan capital - Kamalshahr - and the Alexandrian colonial era township of New Berlin, was favoured by the Khans of Raspur as a showpiece for their ancestral Euran culture. Transferred to the sovereignty of the Surenid as part of the Fontainebleau Accords which brought the Confederacy into the Euran Economic Union and the Raspur Pact. The Imperial & Emirati Bank of Alalehzamin and Constancia has had a branch in the city since 1677, which has significantly assisted in the increase of trade via lending, banking, and financial services, as well as providing the Suren with suitable foreign exchange.

Presently the second largest city of the Surenid, the majority of the population being employed in the systematic excavation and remediation of the ruinous ancient city by the Industrial Archaeology Programme of the Honourable Company as well as the ambitious project to restore the Imperial Shahriyar Palace to condition of splendour it was famous for during the heyday of the Kapav Dynasty. As the city was outside of Babkhan control during the unfortunate events of 1598 AN the city was spared the worst of destruction and fallout that befell the continent. Such looting, destruction, and environmental degradation as occurred, came later. As such it is considered one of the more liveable cities of Eura and the premier entrepôt for trade with the Suren.

In 1704, negotiations resulted in the establishment of the Mehrshahr Special Economic Zone, comprising a walled settlement just south of Mehrshahr, and the smaller island of the Trucial Isle. In exchange, tribute was exchanged (said to be around 500 million Natopos) along with an annual franchise tax.

Since 1708 AN, the city has served as the headquarters of the Committee of Euran Salvation, a body instituted under the authority of the Trans-Euran Command of the Raspur Pact to coordinate the governments of Constancia, the Suren Confederacy, and Zeed.