Eura is a continent on the planet Micras. Its name comes from Babak, first Shah of Babkha, who wrote a story where Eura was the name of the continent Babkha existed on. This was later used as inspiration when Babkha entered the MCS. 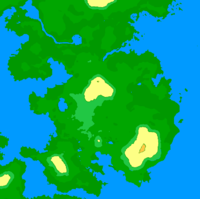 A map of Eura prior to the dissolution of the Micrasian supercontinent.

Eura is the largest of the continents located in the Micrasian southern hemisphere, followed by Tapfer, Cibola and Corum. Prior to the formation of the continents as they now exist, Eura formed the heartland of the southern portion of the Micrasian super-continent, serving as the bridge between the Apollonian continent and Corum - the last continent to break from Eura - and Tapfer. Today, Eura is defined by vast, arid and semi-tropical plains, and rolling highlands which extend outwards from the Duranian Pleateau, at the heart of which rises Mt.Duranian, one of the largest volcanoes found anywhere on Micras.

Eura has twice been fully occupied by a single country: once by Babkha and once by the CIS. Babkha left Eura twice, once with the Alternate Realities project and once with the GSO, but returned both times, regaining most of its land by hook or by crook. In the modern era, control of the Eurani continent is divided between eight different nations including Alduria-Wechua, Antakia, Constancia, the Confederate States of Floria, the Haifo-Pallisican Imperial Trade Union, Nova Caradia, the Suren Confederacy, and Zeed. Of these nations, all but the Confederate States of Floria claim portions of the continent's mainland.