Mainland Tapfer began life as the country of Tapfer in April 2000, founded by Bill Dusch. The country was annexed by foreign powers and later became a part of Jasonia and Menelmacar. During the time of the creation of the first MCS Maps, it was a possession of Jasonia, and was added as the west part of a continent that became known as "The Tapfer Continent". Later, the nations on Tapfer united in an treaty called the Novasolum Agreement, after which the continent was renamed Novasolum; when all of the Novasolum members except Natopia left for Giess, neither they nor the Society were happy with the shared name, and the continent name reverted back to Tapfer.

The continent's most obvious feature is the Thassalan Mountains in the far west, holding the country's largest peaks, such as Mt. Temba (4850 m). Moving further east, one comes to the plain of the Egale River, beyond which are micronations like Venetia and then to the long Lavalonian Peninsula jutting out to the east. North of Lavalonia is Yellow Island, a very large island best known as the home of Natopia, boasting a small mountain range of its own; its most habitable areas are the coastal plain to the east and the long peninsula to the northwest formerly called Elivia.

Around these two main parts of Tapfer are several smaller islands. To the east are Crystal Island and Augustus, in the middle are the Micronia-Ptia-Ferien group, and to the south is ice-covered Caplona, only a hop and a skip away from the Micras South Pole.

Tapfer also includes the Jasonian Isles to the north west and Mar Sara to the south west; both of which have been part of Tapfer from the first MCS map. 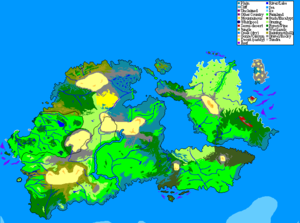 The terrain of Tapfer as decided by the parties of the Tapfer Treaty. 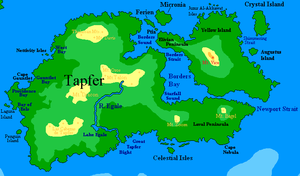 Toponyms of significant landmarks not identified on the MCS map as decided by parties of the Tapfer Treaty.

The continent was first inhabited by its namesake, Tapfer, while the Aeronesian Archipelago was inhabited by Jasonia. By Series One, Shireroth owned the Lavalonian Peninsula as its Duchy of Norfolk; when the map was expanded to the east, Norfolk was re-invisioned as an island chain and Shireroth gave up its Tapferite claim. Two early settlers of Yellow Island were the Hubertist countries of Paramount and Rulak. In later days, Tapfer (under Treesian and Menelmacari control) spread to the entire southern landmass, while Baracao took most of the northeast except for the Tapferite Elivian Peninsula. Around the beginning of Series Seven, early 2004 or so, the old empires collapsed and a new era began. Natopia began its dominance of the northeast, occasionally expanding to parts of the main Tapfer landmass, and the Novasolum countries: Anthelia, Gotzborg, and Alexandria, briefly dominated the south before the moved to Giess. Alexandria remained on the continent and now controls large swaths of the south, and Kavalos and Stormark also have footholds on this now-quiet landmass.