Micras is the official name of the micronational map that contains the fictional land holdings of many Anglophone Sector micronations. However there are a few exceptions with members from the Dutch Sector among other sectors on the map. The vast majority of micronational literature uses this map as the setting for their micronational fictional stories. Micras is the planet mapped by the MCS and is the only habitable planet within the Atos solar system.

History of the name

Micras is derived from Micron, the original name of the planet as named by Bill Dusch. Before Micron, the planet was simply called "The Microworld." Micron was derived from a shortening of "micronation", and was pronounced like (But should not be focused with) as the measurement system of the same name and the fictional species. However, this was an unoffical name. In 2002, there was a poll in the MCS as to what the name of the world should be. Micron was there, but Fnord was also there as a joke choice. However, this joke choice soon became popular. Harvey Steffke told Scott Alexander, then head of the MCS, that if the world was named Fnord than he would have truely failed, everything he and the Flying Islands of Jasonia stood for was dead. He planned on writing a story on how the islands were blasting into space forever and trying to get them removed from the map entirely. The next day, the new name was announced: Micras.

Micras, other than directly being derived from Micron, had two parts niftiness. It had the letters MCS in it (for the organization), and backwards has ARI in it, leading it to be an excellent choice for the name of the planet. Later on, it was made offical MCS policy for the offical name of the planet, and is considered by the majority of those in the MCS to be the name.

It is also a fun fact that it is Soloralist dogma that the planet's name is Micras, a relic back to the days when it was not the only name for the planet. 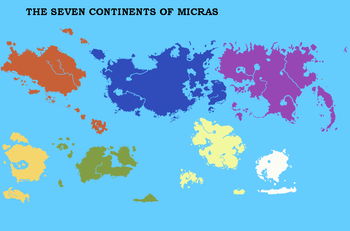 The seven continents of Micras.

There are 7 continents on Micras. These are: