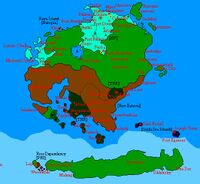 Corum is a continent on Micras.

Corum was first added to the map of the MCS around 3.5.0 along with the rest of the Eastern Hemisphere. It was first called Jaiha, after the first nation to be founded upon it. Later, the Babkhans renamed it Lesser Eura, because it was close to but smaller than the Euran continent. It was finally named Corum in 2006 by St.Fenix.

It is speculated that Corum's depiction on the MCS map is based upon the map of the Federal Republic of Cyberia. 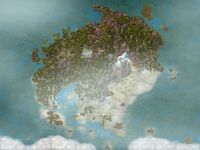 A map of Corum showing the continent's varied terrain and climates, as well as the locations of cities, roads, and rivers..

The continent of Corum incorporates exactly thirty islands (including the rather large island of Hypernostria) plus mainland Corum. Six of these are occupied by New Zimia, eight are occupied by Stormark, three are claimed by Minarboria, while one each is claimed by Natopia and Calbion. New Zimia is the only nation which lays claim to the continent's mainland.

The center of the continent is dominated by the Riponian Mountains (othwerwise known as the Inner Desert), including the continent's highest peak, Mt. Isa (4200 m). These give way to foothills further north until eventually falling into a wide and extremely fertile plain drained by a number of rivers, along which stretch several somewhat prominent forests. Much of the southern areas of the continent and Hypernostria are icy tundra.

Corum is home to more than one major forests. Especially prominent are the Yasutomi Forest, in the western section of Yasutomi Isle, and Erlo Sinders Regional Forest, which occupies a vast stretch of the continent's northeast.

There is only one major body of freshwater on the continent, Lake Norton, which formed when Corum separated from the Eurani continent. Lake Norton serves as the primary entrance to the subterranean region known as The Corumian Underground (known locally as the Arterial Realm), a vast network of large caverns which serve as the home of the Braxian people.

Of all the continents of Micras, none has had its wildlife studied to the same extent as Corum. A region of extremely significant biodiversity, Corum is home to the largest catalogue of wildlife in the world.

Notable among Corum's native animal species is the Bijeko-Lisea-Nas, a top predator who's range extends across the heart of the continent, and the Eko-Adred-Eda, a huge bipedal amphibian. Notable plants include Adraso-Oname and Wutoi-Rabrev, both of which constitute agricultural exports of Passio-Corum.

Major institutions responsible for the study of Corum's wildlife include the University of Port Brent and the New Zimian Space Exploration and Settlement Agency. Using the data collected by these two organizations, it is possible to determine the exact type of flora and fauna which may be encountered in any given 12x12km area, anywhere in Corum. For example, using the data provided it is possible to determine that near the highest peak of Mt.Isa, travelers are likely to encounter fauna including Pui-Illt-Irf, Niha-Hial-Nas, and Eko-Adred-Eda, and flora including Pa-Rabrev, Tiji-Oname, and Alsay-Fiota. Further down the slopes it is possible to encounter a greater range of species, including animals such as Via-Adred-Irf, As-Illt-Irf, and Giid-Lisea-Eda, and plants including including Fuy-Rabrev, Wutoi-Rabrev, and Pev-Fiota.

The shores of Lake Norton, the continent's largest body of fresh water, are littered with crumbling forts, watch-towers, and castles, which those living around the lake have long relied on for trade with, and defense against, the Braxian people who inhabit the vast cavern system which lies beneath the lake's waters.

Jaiha, a Middle-Eastern themed nation started by Thomas Cutterham was the first country to colonize Corum in 2002; it was soon joined by Korhal and the United Secular States. The first country of any lasting influence to inhabit the continent was Menelmacar, which had annexed Jaiha before 2003. A few Slobovian settlements existed in the east during late 2003 before all human habitation on the continent ceased. When people returned, they mostly settled the surrounding islands, which became centers of Stormarkian culture by Series 7. But the most important indigenous Corish nation was Riponia, which controlled the entire mainland save a Stormark enclave in the north for much of 2006 and 2007.

With the fall of Riponia, Corum was split between CIS, which held the old Riponian areas of the mainland; Stormark, which held its traditional island enclaves; and Craitland, which controled the three islands to the east of the continent.

The Islamic Internet Republic was restored on October 31, 2020 and later renamed to New Batavia. It claimed parts of its ancient lands on Corum.