South Sea Islands, officially the Commonwealth of the South Sea Islands, is an island nation in the western part of the Eastern Ocean. The 12,173-square-kilometer (4,700-square mile) territory comprises the two islands of Grand Wulfram and Trinity Island, as well as a number of uninhabited islets.

Located south east of the continent of Corum and north of the southern icecap, the capital city is Joseph Town on Trinity Island, which is the smaller and less populous of the two islands.

Largely uninhabited until 1501, the islands were settled by former inhabitants of the Britannic home islands, beginning with the arrival of the SS. Endeavour on Trinity Island. The first of these new settlers arrived on Trinity Sunday (May 31st) of that year, a date which is now celebrated annually as a national holiday. A small population of Calbain descent was discovered several years after the arrival of the new settlers on Trinity Island (known as Ynys Corrach to the indigenous population), and the indigenous culture continues to thrive in the communities descended from it.

Combining significant Britannic, Nova English and Batavian influences, the South Sea Islands are renowned for their hospitality and seafaring traditions.

Named simply due to their geographical location, the Commonwealth of the South Sea Islands was proclaimed by the Captain of the SS. Endeavour, Sir Nigel James Hunt. Having sailed southwards through the Eastern Ocean without sighting land, the Endeavour returned back north after encountering the southern ice cap and sighted Trinity Island thereafter.

The ocean between the islands and the ice cap became known colloquially as the South Sea, and the name of the islands stems from that designation.

Grand Wulfram is named after Wulfram of Sens, a missionary credited with bringing Christianity to Fryslân. Trinity Island meanwhile was named after the date the settlers first arrived in the territory.

During the dying days of the Britannic Empire, the former Britannic home islands (known traditionally as the Madison Isles) were heavily influenced by arrivals from Nova England and Batavia. The intermingling that followed created a unique cultural fusion, but continued political uncertainty led a group of islanders to leave the archipelago under the leadership of Sir Nigel James Hunt.

Following a plea by Hunt to the Nova English authorities, the group were gifted the SS. Endeavour- a recently decommissioned and disarmed navy ship. While the ship was old and antiquated even by the standards of the time, the wind-propelled ship was well equipped to deal with the journey that followed. 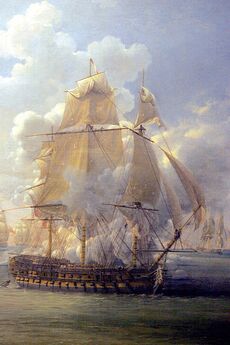 The firing of a gun salute by HMNS Desire, 1496. Following its decommissioning on 1500, the ship was renamed as SS. Endeavour.

The group led by hunt consisted of approximately 600 settlers (300 men, 250 women and 50 children) and, once abroad the Endeavour, they set sail on Tweede kerstdag (December 26th) 1500. The group headed south, hoping to reach the southern hemisphere before the worst of the northern winter.

Following the ominously but accurately named Journey of the Frozen Tears, which lasted a little over five months, the SS. Endeavour landed on Trinity Island on May 31st 1501. The moment was later memorialised on the South Sea Islands coat of arms.

The first settlement established on the islands was named Port Egmont, in honour of the seaman who first sighted the island from the deck of the Endeavour. While the Port Egmont served as the national capital during the early years of the South Sea Islands settlement, the town's location exposed it to extreme weather and the threat of sea ice during winter. For that reason, after only three years of habitation, the settlement was moved to the current site of Joseph Town on the northern coast of Trinity Island. It was during their search for a more hospitable area to settle that the new settlers became aware of the existing small indigenous population, and an increasingly close trading relationship built up rapidly. Over time the two communities merged, although Calbian culture is still proudly observed and maintained in families descended from the preexisting inhabitants of Trinity Island.

Fifty two years after the first settlements, in 1553, Grand Wulfram was claimed by the islanders and the nation's current national borders were established. The temperate climate on Grand Wulfram was a key factor in the island's population growth, and the first settlement established there (Zuid-Richel) quickly grew to become the nation's largest city.

The Geography of Trinity Island is heavily influenced by the island's proximity to the nearby southern icecap. Rising steeply from the sea, the island is only accessible by ship at Discovery Bay in the south and Nightgale Bay in the north west. The island's landscape is predominately rugged and mountainous, with flatter areas of tundra in the coastal regions. At higher elevations, the island is permanently covered with ice and snow.

The island's climate is classified as polar, with average temperatures at sea level at around 0°C in winter and 8°C in summer. In winter, temperatures can drop to around −15°C.

The highest point of the Trinity Island is Mount Richel, which stands at 2,921m above sea level.

Located further north and benefiting from the warmer continental climate of Corum, Grand Wulfram is significantly warmer than Trinity Island. The island consists largely of rugged volcanic terrain, with coastal areas being largely covered by volcanic rock and black sandy beaches. High sea cliffs dominate the northern and eastern coasts, while west and south are both flatter and closer to sea level.

Coastal farmlands in these areas give way to the cooler, wetter highlands that dominate the island's centre. The highest point on Grand Wulfram is Mount Martinus, which stands at 290m above sea level.

The South Sea Islands' two cities are home to approximately 80% of the nation's population, while the remaining population inhabit a number of smaller towns, farms and settlements.

Located on Trinity Island, Joseph Town is the the national capital and the oldest continuously inhabited settlement in the South Sea Islands. With a permanent population of 3,000, the city was built on the shores of Nightingale Bay, between the spurs of nearby Mount Torrington. The city's primary industries are fishing (primarily toothfish and squid), animal husbandry (yak & reindeer) and public services (including government administration).

A map of the South Sea Islands, depicting the main islands and settlements

Government House, the ceremonial home of the Lieutenant Governor and the location of the Legislative Assembly chamber, was build in 1586 and overlooks the city's busy harbour. The nearby Joseph Town Cathedral has been a notable local landmark since its construction in 1556, with a replica of SS. Endeavour located on its seaward side. Additionally an existing ancient memorial to Prince Jack of the Calbain was later expanded to include a large bronze statue of the Prince, which stands in the Memorial Park opposite the cathedral.

Joseph Town's most famous landmark meanwhile is St Christopher's tower. Standing at 40m tall and constructed part way up the eastern spur of Mount Torrington, St Christopher's tower operates as a lighthouse and was constructed to celebrate the South Sea Islands'centenary in 1601. It is also the tallest building in the islands, where single or two storey buildings are the norm.

The largest city in the South Sea Islands, with a population of around 6,000, Zuid-Richel is located on the island of Grand Wulfram. Founded in 1553 when Grand Wulfram was first incorporated into the nation, Zuid-Richel's favourable climate and proximity to farmland contributed to the city's rapid expansion. Inward migration from former Britannic Empire territories fuelled the city's population growth, and successive waves of migrants brought new industries and innovations to the city.

Today, Zuid-Richel is home to South Seas International, the only civilian airport in the South Sea Islands. Additionally, the nation's only railway line leads from city's industrial centre to the nearby seaport.

The city's primarily industries are high-tech and precision manufacturing, support work for nearby military installations, e-commerce and tourism.

The attractiveness of Zuid-Richel for inward investment was attested with the opening of a residency by the Honourable Company in the city in 1687 AN [1].

The Camp is a collective term used to describe all areas of both Trinity Island and Grand Wulfram that lay outside of the city limits of the two main cities. The rural and wild areas of the South Sea Islands are home to a total population of 2,289.

The South Sea Islands are a parliamentary democracy under a constitutional monarchy.

While the reigning monarch holds ultimate Executive power within the islands, the constitution of the South Sea Islands indicates that the monarch may appoint a Lieutenant Governor to exercise that power on his or her behalf. The current Lieutenant Governor is George Middlemore.

While the monarch, and by extension the Lieutenant Governor, theoretically holds significant powers including to declare war and make peace, in reality the Executive usually acts upon the advice of the Legislative Assembly.

*The Camp is a term used to describe all areas of the islands outside of the two main urban centres.

MLAs are elected for a four year term using the Single transferable vote system. The constitution of the South Sea Islands does not allow for political parties, and therefore all MLAs sit as independents.

MLAs elect a Speaker of the Legislative Assembly once per year, the Speaker is chosen by Simple Majority.

The last election for the Legislative Assembly took place in 1691.

Due to the lack of an indigenous population on the South Sea Islands, and the immigrant heritage of those descended from the successive waves of settlers who arrived since 1501, the islands today are generally ethnically diverse, particularly in urban areas. As of the 2020 census, the racial makeup of the population is as follows:

The islands' official religion is the Protestantse Kerk in de Zuidzee-eilanden (Protestant Church in the South Sea Islands), an amalgamation of various Protestant Christian traditions established in 1506. The church was established by Pastor Jacob van Bergen to unify the South Sea Islands'original settlers and prevent religious discord. As of 1687, 65% of the islands' population identify themselves as active members of the Protestant church, with rural communities having particularly high attendance at formal acts of worship.

Vedasism is also present in the South Sea Islands, particularly in Zuid-Richel where the sect and operates the Zuid-Richel Mandir. Vedasists account for 20% of the islands' population. The remaining 15% identified themselves as Atheist, Agnostic, or declined to answer the census question regarding religious faith.

The diversity of the South Sea Islands' population has given rise to an equally diverse variety of cultural traditions. The following festivals and observances are national holidays in the islands:

The South Sea Islands Defence Force (SSIDF) are responsible for defending the people and the interests of the islands. Recognising the limitations presented by the islands' small population, the defence forces are trained and structured to operate effectively in the challenging environment of the South Sea Islands. In addition to defence, the SSIDF also participates in anti-piracy patrols, peacekeeping and fisheries protection.

The SSIDF has, in recent years, benefited from an equipment modernisation programme discretely brokered through the Euran offices of the Honourable Company.

A standing force of 480 commando light-infantrymen, organised in a four squadron Raid Response Group, supported by a 1,200 strong Combat Support Services Regiment and a forty-man GHQ Troop, forms the backbone of the SSIDF. Trained for guerrilla warfare in a polar environment, the land forces of the South Sea Islands also specialise in territorial defence, anti-piracy, parachute landings and mobile air defence. Headquartered in the highland areas of Grand Wulfram, a small garrison is also retained in Joseph Town for ceremonial purposes.

The naval forces of the SSIDF are the most active military units in the South Sea Islands, providing constant deterrence against illegal fishing and marine pollution. The SSIDF operates six Seafox-class corvettes, each equipped with an NH-76 Dromosker helicopter. A further four helicopters are stationed at South Seas International Airport on Grand Wulfram.

At any one time, four patrol vessels are at sea.