The Kingdom of Normark is an independent country in northern Keltia, established in 1563. It was an autonomous country of Elwynn (1678–1703) and a demesne or territory of Natopia (1615–1678)

The Kingdom considers itself the spiritual successor to the Grand Kingdom of Normark (1563–1604). As such, it follows the Einhornist ideology and culture of its predecessor.

Normark borders the Green throughout most of its territory. The exception is the Haifo-Pallasican Bassarid enclave of Jangsong (under Norse/RP blockade) and the long eastern border with Mercury.

Normark experiences cold winters and mild summers. Much of the coastline turns to ice in winter, and the average extent of the Arctic pack ice reaches the northern tips of Normark.

Normark is divided into fifteen municipalities or bailiwicks (Norse: fylke, pl. fylker). Most of them are rural but they are named after their largest city or settlement.

The Norse bailiwicks are:

In 1685, the Vanic Web, consisting of Stormark and, to a lesser degree, the Franco-Batavian Empire, disintegrated. The Storish state completely dissolved into anarchy, while the Franco-Batavian Empire split into the kingdoms of Amokolia and Batavia. Close to Normark was the Duchy of Østfold, a former Norse duchy that Stormark had occupied from 1624 onwards. The population and culture of Østfold had remained steadfastly Norse during the time of Storish occupation, and despite the Vanic hegemony, Stormark was given little support in the area. As such, when the time of the disintegration of the Vanic Web occurred, many people in Østfold rallied to rejoin Normark.

Initially, the Norse government, echoed by the Elwynnese central government, was caution of these developments. It supported the immigration of Norsemen and -women to Normark. Many Østfolders, in fact up to 300,000 of them, applied for residency papers in the first few weeks after the disintegration of the Vanic Web. It became clear to the Norse government, and to the Elwynnese one, that to simply give up on regaining the territory, with an existing functional infrastructure and economy (albeit disintegrating along with the Web), would cost Normark more (as it would have to deal with rehousing all Østfolders instead of integrating their homes into Normark). The Norse government thus petitioned the Council of Eliria to annex the north-western parts of Normark (where infrastructure existed and where ties to Normark were the strongest). The southern parts remained recalcitrantly Vanic, and thus, Normark and Elwynn decided to respect that by not engaging with it.

On 24.IX.1685, the Council of Eliria approved the bill to annex the northern Østfold area, and established the Commission for the Reintegration of Østfold to oversee the reintegration. On 8.12.1685, the Council of Eliria and Nordisketing jointly adopted a law designating the new Østfold bailiwicks as Storesund, Jelsinga, Galvø, and Slevik. At the same time, in the south-east of the country, the bailiwick of Revby was formed, which immediately secured a border with Mercury.

During the Second Elwynnese Civil War, Normark saw no fighting on its own territory. As such, it was the only part of Elwynn with increased economic output (largely financing the war machinery of the Loyalist Side). The Einhorn Society, officially affiliated with humanism, became the only legal party in Normark, and began a gesture of influencing all aspects of Norse society.

Political commissars were placed in all organizations and companies, public as well as private, to advance the Einhornist–Humanist policies and uphold Elwynnese patriotism during the rupturing civil conflict. This included all media organizations.

Pensioners' organizations began collecting clothes and tents and other aid measures for displaces persons in "the motherland" (as propaganda sent it). Any ideas of Norse independence or integration with Hurmu was quashed and denounced as unpatriotic and borderline traitorous.

With the economy of Normark actually booming, people largely stayed off from protesting the war or the government one-party state. When the news of the Scouring reached Normark, state media took a careful approach in reporting of the nuclear devastations of Eliria, Islus, Kingsgate, Dragonskeep, Glenfiddich, Vijayanagara, and Tephal, at one hand condemning the rebel atrocities and on the other hand regretting that the bombings of the cities in rebel-held areas was necessary to bring an end to the loss of life in Elwynn. Vigils were held across Normark lamenting the many deaths.

Former Storish citizens living in the Green or in Østfold were quickly recruited as "cannon fodder" during the war, and was seen by opponents as a way of ensuring population control in the Einhornist state.

Following the war, Sigrid Årud, the political leader of Normark, agreed (although not entirely enthusiastically) to the findings of the Congress of Chryse regarding the formation of the Benacian Union. She attempted to suggest the name "Benacian–Norse Union" but this was quickly shot down. As such, Normark is not part of the Benacian Union, nor does the Benacian Union exercise any kind of jurisdiction over Normark.

In public, however, she emphasised the Union as both a nationalist union (the union with Elwynn staying intact, the former UGB having basically been Elwynnese in its leadership and organisational structure) and an ideological union. The union was necessary to fight off the perceived notions of corrupted Ayreonism across the world (a term used for Ayreonism in Normark where Elijah Ayreon remains honoured as a saviour of mankind), which also, in the Norse government's view, had begun to infect other Raspur Pact nations, particularly singling out Sanama and Shireroth in name.

In the beginning of 1703, Normark's government, having experienced confusion on the international stage with regard to Normark's status with the Benacian Union and the Elwynnese Realm at large, declared that it had assumed all such foreign affairs and military matters that belonged to the Elwynnese Realm prior to its Benacian territories' entry to the Benacian Union. Normark appointed then its first defence minister and first foreign minister, heading the Ministry of Defence and the Ministry of Foreign Affairs respectively.

The Union Defence Force in Normark was declared to have been placed under the authority of the Ministry of Defence.

This declaration did not find favour with the UDF garrison there.

The threat of a coup was however averted when the Civil Executive in Ardashirshahr signalled its acceptance of the measures subject to appointing to the State Council those individuals who would exercise "delegated" powers in defence and foreign affairs for Normark on behalf of the Elwynnese Realm.

On 13.XIII.1703, the Congress of Chryse issued an Amicable Grant, which bestowed independence and sovereignty upon Normark under Tarjei Thorgilsson, within it named King of Normark. Tarjei's first act was to appoint Arnold Christianssønn Einhorn prime minister, pending new elections in 1704.

On 24.XIII.1703, the Nordhær conducted a torchlight parade through Elijah's Rest.

In 1705, Normark joined the MTO and the MTO's treaties on the laws of the seas, the common court, and the international commission. Its first MTO ambassador was Waldemar Thorgilsson.

In mid 1706 AN the King surprised the prime minister and his cabinet by announcing his intention to expel Knotaric, the heretical black-sheep of the family, from his stronghold in Fanghorn before the end of the year. Whilst the Nordhær had, since the new year, begun gathering in armaments, reorganising its strength, and mustering new levies of troops, it had not been expected that an expedition into the interior would be conducted as soon as the same year that these preparations had commenced.

Normark is administered as an Einhornist-Humanist state via legacy institutions, accountable to the Civil Executive in Ardashirshahr for matters pertaining to defence and foreign affairs.

The influence of the Raspur Pact over Normark is maintained by the network of bases and facilities operated in the country by the Keltia Command.

The precarious strategic position of Normark, assailed by Bassarids and lacking safe navigable routes to international waters, means that the state of siege established during the War of Lost Brothers has been maintained.

The military establishment supported the subsequent Humanist takeover of the cultural and educational sectors of the nation, from 1685 onwards, in order to ensure that no slide into Ayreonist tendencies undermined national unity or preparedness. Indeed the quietude of Normark during the Second Elwynnese Civil War demonstrated the effectiveness of this policy.

Normark is an active and supportive member of the Raspur Pact.

Outside the Raspur Pact, Normark has good relations with Mercury, its only sovereign neighbour, and with Hurmu.

The industrial sector is highly developed.

A portion of the economy is the so-called Green sector, which refers to Normark's economic relationship with the Green:

The Green Trade is heavily dominated by the branch of the Einhorn family which established itself beyond the bounds of Normark in the aftermath of the War of the Harpy.

The service sector is highly developed.

Ethnic groups were as follows:

Before Normark's accession to Elwynn, census registration was based on ethnicity. If one is a foreigner with a non-Natopian or non-Normark ethnicity, one is classed as "foreigner". A small proportion of the Norse population have nationality in Elwynn and enjoy the Raspur Pact rights of free movement in their ancestral homeland.

The Norse ethnicity constitutes a clear majority in all of Normark. They share their ancestral homeland with that of the Reinish people, also known as Reindeer Herders. The Reinish are a nomadic people, with only up to a quarter of its total population having urbanized.

The Norse people speak the Norse (det norske språk) and the Reinish speak Reinish, though most also speak Norse as a first or second language. Elw is the most common foreign language studied in schools. 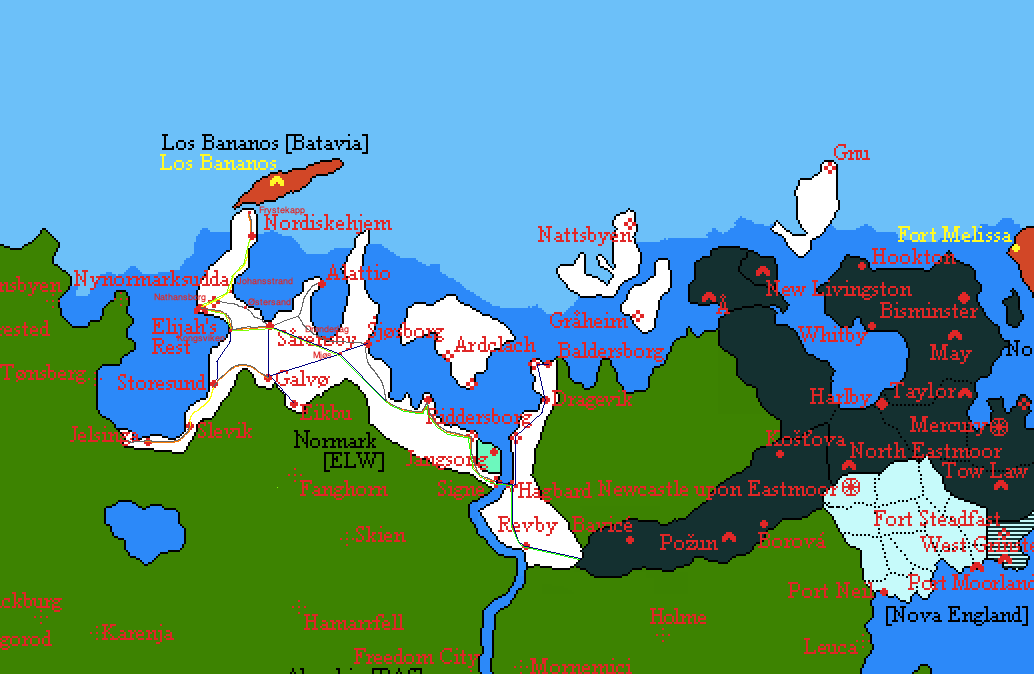 Railways are managed by Jernbanekompaniet i Normark ("The Railway Company in Normark") and cooperates with Mercury on the Trans-Keltian Express.