The Strait of Haifa, otherwise known as the Vine of Keltia or the Eastern Vine, is the narrow, elongated, shallow sea which separates central and eastern Keltia. The Strait is situated between longitudes 100E and 130E, and latitudes 20N and 70N.

Today the Strait of Haifa is dominated by commerce between the states which constitute the Maritime Markets of the Strait of Haifa. With that said, piracy is extremely common in the region, especially in regions which lie to the south of Lake Morovia.

Countries which claim territory bordering the Sea of Storms are: the Haifo-Pallisican Imperial Trade Union, Alperkin and Natopia. 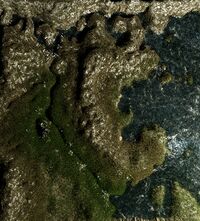 Satelite imaging highlights the important role which the Strait of Haifa plays in central Keltian society.

The Strait of Haifa is a dormant continental rift zone in eastern Keltia which was formed when the East Keltian Continental Plate diverged from the Laceran and Caledonian plates.

Major active cities along the Southern Strait of Haifa include Blore Heath, Mylecia, and Jogi. Inactive, or independent city-states include Fort Itainen, Bursesti, Newstone, Lewisburg, and Nouvelle Geneve. These latter cities are especially vulnerable to attack by pirates, such as those mentioned above, as well as by the giant fishermen who inhabit the coastal shore-lines of the Thallasopois Desert, who sometimes take exception to the high commercial traffic in the region, which is known to disrupt their efforts to catch the whales, sharks, and dolphins on which they subsist. These myriad challenges have resulted in a relative, protracted decline in the number of independent city-states along the Southern Strait.

The Southern Strait is regarded as the birthplace of Bassaridianism.

Dozens of ancient Amasebéiri del hed Amash stand tall over the Abeisan Archipelago, the group of islands which marks the eastern boundary of Lake Morovia.

Despite its name, and its depiction on most official maps as a lake, Lake Morovia is not a lake but a vast swampland which sits in the heart of an ancient, dormant super-volcano. With that said, Lake Morovia is a large body of fresh water which drains directly into the briny Strait of Haifa. Accessible in only certain locations to large sea-going vessels, Lake Morovia is a foreboding land of twisting waterways and wetlands which has historically served as the home of notable nations such as Ocia and Haifa. Located in the center of the temperate climate region known as the Valley of Haifa, Lake Morovia is a region rife with Haifan pirates who derive inspiration from the adventures of Captain Ismael Hatch. With this said, the most savage inhabitants of the waterways of Lake Morovia are not pirates, but the vampiric alps who inhabit the region, and their worshipers - known as the Alperkin - whose brutal and bizarre rituals center around the extensive consumption of the toxic, raw leaves of the wild Noctic-Rabrev.

Lake Morovia is home to the Bassarid state of Haifa, to the Haifan city of Vaeringheim, to the indigenous Alperkin nation, and to the Greater Morovian Independence Intiative and its separatist allies in Jezeraah. Tension between these various stakeholders resulted, in the period following the collapse of Caputia, in the outbreak of the Haifan Civil War. 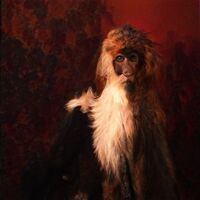 In addition to vicious harpies, the Northern Strait of Haifa is also home to a race of sasquatch known outside the region as Haifasquatch. Haifasquatch feature prominently in Alperkin folklore.

Ghosts of the Northern Strait

A ghost, or wisp, hunts its prey along the edge of a forest near the city of Vaeringheim.

Regarded by the pirates who sail under the banner of the Hatch Ministry as being the servants of the goddess Aganippe, the Harpies of the far north are revered for their semi-mythical ability to ward off the Ghosts of the Far North. Travelers passing through the strait, for this reason, often rely on the presence of harpies for protection against the region's deadly, parasitic spirits. With that said, such practices are not actually encouraged, insofar as harpies are known to viciously prey upon any unfortunate human who carelessly manages to obtain their notice.

The primary domain of the Hatch Ministry, a well-financed and savage community of Normarkian and Haifan pirates which formed following the series of raids in the region carried out by Captain Ismael Hatch in the 35.60's PSSC, The Gulf of Jangsong is the body of water which defines the northern mouth of the Strait of Haifa. It is bordered by the Bassarid states of Jangsong and the Bassarid Kingdom of New Normark, and by the formerly Natopian demesne of Elijah's Rest, which is now a part of the Elwynnese autonomous republic of Normark.

The Gulf of the Jangsong was the site of the Strait of Haifa Campaign, an informal, undeclared military conflict between the Haifo-Pallisican Imperial Trade Union and Natopia, which occurred in the final stage of the War of Lost Brothers. Despite its relatively limited scope in contrast to the war's other conflicts, the Strait of Haifa Campaign is perhaps the most infamous of the campaigns to have occurred during the war. This fact is due to the asymmetrical nature of the campaign, which featured the extensive employment of guerrilla-style tactics by forces supported by the Bassarid Empire, including espionage, piracy, and outright terrorism. This campaign resulted in a stalemate defined by the continued existence of the Bassarid Kingdom of New Normark.

The distorting effects of the Crookening are depicted in this picture of a wanderer at a Bassarid temple near the city of Jangsong. While the scene appears mostly normal at first glance, one notices that the towers which appear faintly in the background appear to be constructed at an unusual angle.

The Crookening is an unusual type of fog that occurs in the region surrounding the Gulf of Jangsong, which causes objects when viewed at a distance to appear crooked or lop-sided. It has been observed, although not scientifically confirmed, that the Crookening tends to take in the periods before and after the occurrence of the aurora borealis.

The presence of the Strait of Haifa on the official map of the MCS has long been a contentious issue amongst the organization's members, as many have historically argued that the waterway is unrealistic or poorly defined. This argument was largely resolved by a 2015 poll in which the majority of respondents voted in favor of recognizing the waterway as a "narrow sea."

On 21 December 2017, the name of the Strait of Haifa was voted onto the MCS's physical map by 75% of Micras' nations.