The Coat of Arms of Elijah's Rest

Konungsheim Elieru (also Konungsheim or Konungshjem in Norse; and Elijah's Rest in Istvanistani; Elw: Коонунгсхейм Елиятооқ, Koonungshejm Elijatooq) is a city, bailiwick and capital city of Normark. The name of the city literally means "King's home Elijah's Rest". Population as of 1703 is 1,765,603. The official language is Norse.

As the name suggests it is the resting place of Elijah, the slain Prince of Elwynn whose martyrdom at the hands of Siseran cultists became a pivotal moment in the theological development of Bovinism and a defining one in relations between Jingdao and Natopia. The choice of the ruined lands of Normark, at such a vast remove from southern Cibola is presumably explained by the affinity felt by Elijah for the Norse during his life. As the importance of Elijah grew the Natopian commitment to securing his resting place expanded as well, becoming an extensive overseas commitment in the northern hemisphere that the Natopians have become committed to for primarily ideological reasons.

Following the occupation of Jangsong by the Imperial Trade Union in the late stages of the War of Lost Brothers the Natopian government sought to bolster the position of the Elian Union and assert control over the Gulf of Jangsong and the northern portion of the Strait of Haifa by expanding into wilderness territory which had been penetrated by Haifan pirates and diamond prospectors under the cover of the war. This action in turn prompted the infamous night of the Pallisican Fury where Kan Zen raged at the MCS for allowing her perceived interests in the region to be swept aside by the new Natopian counter-claim. In the aftermath both sides began to raise new troops for the battle to control northern Keltia, leading some to argue that the conflict had branched away from the War of Lost Brothers to become a separate conflict in its own right, the War of the Harpy, so named in reference to the semi-mythical creatures reputed to haunt the region, or to Kan Zen whose fury drove the escalating conflict. 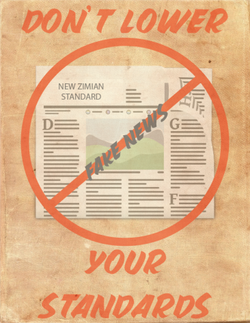 As a demesne of the Bovic Empire, a subject of the Elian Union, the defence of Elijah's Rest from external attack is primarily the responsibility of local committees of defence supported by the naval and orbital assets of the Natopian Defense Force. Military actions undertaken by Natopian and allied forces in the region fall under the purview of Keltia Command, whose headquarters were established in the region.

With groups of hostile insurgents actively campaigning within the territories claimed by the Bovic Empire in Normark, the Gulf of Jangsong, and the Strait of Haifa, internal counter-insurgency operations are the responsibility of the Natopian Security Forces raised by the Minister of Security. Additional support to security forces is provided by Imperial Natopian Constabulary whose primary responsibility is the preservation of law and order, in consequence of which the constabulary contends with bandits and paid foreign agents whilst the NSF combats armed insurgents.

Outside the borders of Elijah's Rest, partisan operations, including ambushes, abductions, and targeted assassinations, are undertaken against the Jogi Regiment and followers of the Stripping Path by the Tuktuvut Confederation and the Order of the Super Secret Stripper Seekers, a very particular, if not peculiar, band of the Bovic Church Militant.[1]

Citizens of Elijah's Rest have increasingly since the effort by the government of Natopia to officially annex lands occupied by Pallisican military forces around Jangsong, been subjected been subjected to absurd and outlandish claims put about by affiliates of the Haifo-Pallisican Imperial Trade Union to the effect that single-mindedly murderous religious fanatics have somehow penetrated every aspect of civil society, the military and the intelligence and law enforcement communities, in spite of never giving a satisfactory explanation as to the how and the why of these miraculous accomplishments. Actual attempts at infiltration on the ground by foreign subversives have been somewhat less spectacular. A stub-nose dressed in moccasins was caught trying to crawl amongst the pickets of the Fox-Tail Clan during the Full Moon of the 7th month in the year 1656. After the wretch was tied to a fir tree, scalped and doused in petrol, he subsequently made an interesting confession about speculating in shares issued for ventures whose nature and success were ephemeral at best. The video of his confession, and of his subsequent burning, has been shared widely on social media platforms in the Bovic Empire. Despite the extreme popularity of the snuff-video, which happily coincided with a public-relations campaign aimed at assuring the public of demesne's vigorous defence of its borders, pressure continued to mount on the government which faced calls to curb the marauding of the Stripping Path followers based in Ardclach, Jangsong and Dragevik.

Ardclach and Jangsong have separately been subjected to orbital strikes by the Natopian Defense Forces with the aim of degrading the military and economic infrastructure hurriedly deposited in the region by the New Zimian War League and the Foreign Ports of the Stripping Path.[2] Concurrent enemy air strikes against civilian settlements in government controlled areas have also occurred whilst the two sides wrestle for air supremacy over the Gulf of Jangsong.

In the years 1657–1662 the forces deployed in Elijah's Rest were retrained, re-equipped and reorganised, with the essentially static Committees of Defence being subsumed into a force of six combined arms corps intended to better sustain manoeuvre warfare in the sub-arctic environment of Normark. The local militia was substantially reinforced by elements of the Natopian constabulary, security forces, and the Shapur Division of the Natopian Defense Force. Tactical aviation and ground-based air defence systems were also greatly strengthened during the period of relative calm following the subsidence of the War of Lost Brothers.

To a large extent the structural transactions of the economy of Elijah's Rest rely upon the Trade Board of Normark, a centralised body that acts as bond market, clearing house and stock exchange, facilitating the access of both the local government and small business holders to letters of credit and finance from the wider empire and allied economic community.

Before the war began the primary income of the region came from timber, mining, fur trapping, and a steady stream of tourists and pilgrims to the territory's eponymous mausoleum. With its harbours blocked by ice for most of the year, exporters relied variously upon the SATCo fleet of submersible merchant vessels entering into the gulf of Jangsong, sub-orbital shuttle "hops" to the rest of the empire, or the overland route from Elijah's Rest down to the southern coast of Hamland/Caputia for embarkation. With the advent of the war, bringing with it the increase of enemy activity and the demands placed upon SATCo's merchant fleet in more economically vital sectors, the primary export is now the underdeveloped Caputia-Road.

In 1662 SATCo returned to the fray in the Gulf of Jangsong, with the institutionalisation of the wartime convoy system in peacetime via the Trade Fleet system and the direct contracting of Sea-Reavers for protection duties, the annual fleets from Elijah's Rest to Freedom City (Morovian-Patrovia / Lake Morovia) and New Blackstone would be adequately defended against freelancing pirates and commerce raiders and able to cover the withdrawal and or dispersal of the merchantmen in the face of a concerted enemy fleet action.