The Natopian Defense Force is a combined arms force tasked, under the Caprine Code with defending the totality of Natopia's holdings on Micras and in the wider Atos system. It's motto is Duty, Loyalty, Honor. It is ultimately under the command of the Natopian Emperor, who has the supreme rank of Grand Commander of the Defense Force. Most operations and decisions are made by the Natopian Secretary for Defense. 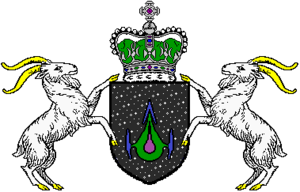 The Spacefleet's Coat of Arms

The Spacefleet, in its present form, has been in continuous existence since 1571. Over the period of time the fleet has seen individual vessels progressively rebuilt through maintenance and life-extension programmes as well as entire classes withdrawn from service or redesigned.

The Natopian Spacefleet developed faster-than-light travel through unknown and clandestine means. The technology was once widespread throughout the fleet when regular missions to Giess and brief visits to Daia necessitated FTL speeds. Most ships are outfitted with a traditional spacewarp, known as Vastadenu Drive, which required a mineral component that is rare on Micras but abundant on Giess. Because of Giess' disappearance, the Spacefleet has enacted a strict sublight cruising policy to preserve the minerals for critical uses only. Newer classes have a vortex jump drive which has proven to be a more stable method of transport and does not require crystals or such.

The Natopian International Space Station was built in orbit and hosted international teams of scientists, diplomats, and provided logistical support for other nation's space programs. The most notable early exchange program was with the Karnali space program, where both national space agencies built a Bismarck class ship together and launched it as the KSS Karnali. According to Natopia's law, the Spacefleet maintains organizational autonomy outside of Micras' atmosphere, which allows the NISS and any Spacefleet assets stationed there to act as necessary in the harsh realities of space. Unless re-positioned for reconnaissance or classified missions, the NISS is found in a geosynchronous orbit over Angus Spaceport with several drydock facilities nearby (relatively).

A smaller version of the NISS, Natopian Station 2, was once in orbit around Giess.

New Lindstrom Tarsica Base was created when an old style Imperial-class carrier was dissembled in lunar orbit and reassembled on the surface of Tarsica. It has not always been manned, depending on the priorities of the NDF command staff, the civilian government, and whether or not other nations have personnel on the moon. The base is currently permanently manned, and the Guinevere Dome contains the transplanted remnants of the Hazel tribe, who fled their native Flaventia after a terrible fire.

The NSS Ganymede, an Io-class cruiser, was lost in a wormhole in 1593 during a standard patrol route between Giess and Micras. That same year the AlexNat Gate suddenly reopened and an invasion of the Grand Commonwealth poured into Klaasiya on Micras. It was later discovered that both the Ganymede wormhole and AlexNat Gate had opened into the parallel mirror universe of Meekras, where neither the Grand Commonwealth nor the SPEAR alliance collapsed and waged global war for years.

The War of Lost Brothers and the ongoing War of the Harpy compelled the Natopian Spacefleet to rebuild its aerospace arm for counterinsurgency operations in Normark.

As the primary spacefaring power of the Raspur Pact, the Natopian Spacefleet has exclusive operational control of the alliance's Space Command, subordinated for administrative purposes under the Tapfer Theatre Command.

The uniforms for each branch of the Defense Force are designed by the Institute of Heraldry within the Court of the Verdant Gardens and manufactured via a contract with Dingo Enterprises. The unniforms were refreshed in 1685 to make rank and service branch more distinctive. Spacefleet uniforms are consist of dark gray shorts and sleeveless uniform shirt (for arm and leg mobility in potential zero-g situations) with silver-colored leather straps and silver accents. Navy uniforms are blue pants and long sleeve uniform shirts to protect against the elements while on deck with gold-colored leather straps and gold piping for accents. Army uniforms are dark teal with rolled up sleeves, bronze-colored leather straps, and bronze piping for accents.

Ranks are identified by the cover and harness, using a hierarchy of visual iconography based on dominant styles in the upper ranks and submissive styles in the lower ranks. Command ranks wear a cross harness and a muir cap. Senior officers wear a fireman harness and a beret. Junior officers wear a bulldog harness with a garrison cap. Enlisted service members wear no harnesses and a cadet's cap. 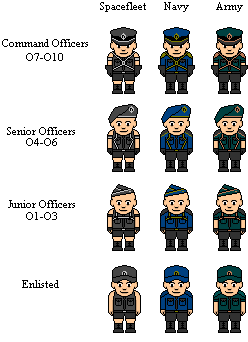 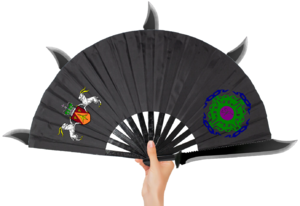 In addition to mission- and station-specific sidearms, all NDF officers and enlisted persons are issued a Thworpper for personal defense, hand to hand combat, and as a ceremonial weapon in place of a saber for dress uniforms. The Thworpper is a clack fan designed by the NDF and produced by Lindstrom Square Mercantile, based on the popular fans used in circuit parties. It features five blades and a satin fan with the Cross of Sovereignty and NDF Coat of Arms. In the closed position it can be stored in a belt holster and used as a survival knife and for one of one combat. In the open position, it can be used with a broad sweeping gesture to cut several bitches.