From MicrasWiki
(Redirected from Giess)
Jump to navigationJump to search

The Geographical Standards Organisation, or GSO, was a cartography society that maintained the fictional planet of Giess from August 2006 to August 2009. It was the most serious competitor faced by the MCS and Micras in their project to unify micronational cartography. 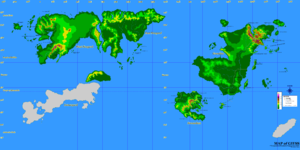 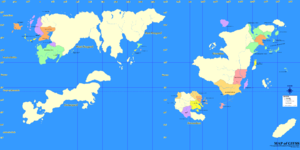 First, Chief Cartographer Augustin Dei Barbone pursued an aggressive policy of freeing up land for new nations to use that seriously restricted the ability of old nations to expand and sometimes even took land away from them. There were some attempts to define the amount of land to which a country was entitled mathematically via an equation taking into account post count and activity, an attempt which quickly ran afoul of countries who wanted more land than the equation allotted them. Most important was the Atkins Reduction, in which each country was asked to give up a small amount of land; many countries felt their core territories were being taken away from them in the name of preserving land for hypothetical future empires.

Second, John Darcy led a group (actually mainly just John Darcy, but he was very loud) of people pushing for higher simulation standards. The entire MCS Map had mostly been made up on the fly, and Darcy wanted tectonically accurate landforms and rivers, full-blown climate simulations, and constructed anthropology and ecology. This was opposed by many other Micras members, who wanted to leave the planet deliberately vague so that future micronations could claim land and mold it in their own image without being told every detail of what their fictional geography had to be like.

Third, several countries wanted to switch to a complicated simulationist "game" in which they assigned themselves resources, GDPs, et cetera and used them to produce things like industrial infrastructure and military units according to mathematical rules. This became not only a practical difference but also a philosophical rallying cry: these countries believed they were superior and "more serious" than countries that were "only about storytelling", and touted themselves as "simulationist" micronations as opposed to the others' "fantasy". They began discussing a world solely for simulationists, separate from the fantasists who were holding them back.

After long talks behind closed doors, in August 2006 Behmanesh Farzan and John Darcy announced the foundation of the Geographical Standards Organization, or GSO. The full list of founding members has been lost, but it included at least Anthelia, Babkha, Baracao, Gotzborg, and Alexandria.

The organization was to differentiate itself from the MCS on a few lines. First, it would be admitting only the higher-tier, "simulationist" class of micronations. Second, it would explicitly try to create a strong simulation that tied together all its members. Third, it would use a map generated by AutoRealm, which would look better than the MCS's MSPaint style maps and be continuously updated directly off the AutoRealm file.

The reaction from the MCS ranged from dismay to anger; dismay because the cartography society had long acted as a unified force for the Sector and was now becoming a divisive force instead; anger because of the clandestine way in which the negotiations had taken place, with the existence of a discontent faction not even revealed until the final announcement. A leak of some of the classified negotiations revealed that the GSO founders were saying relatively mean things about most MCS nations behind their backs, adding to the anger. Among the most unhappy was Natopia, member of the Novasolum Confederation - the entire Confederation had been invited to the negotiations except for themselves, on the grounds that they weren't serious enough and might tell other countries.

Ryan, Chief Cartographer of the MCS, resigned in a rage and tried to close down the MCS; it was saved only when a group of participants led by V.C. Vehendi cancelled the closure and recreated it in their own image, starting the modern MCS structure led by a Council.

At its height, the GSO included at least the countries of Anthelia, Babkha, Baracao, Gotzborg, Alexandria, Antica, Paulovia, Stormark, Hurmu, The United Baronies, Treithar, Karnali, Interland, Zindaria, and Oscland, although many of these also maintained land on the MCS. Throughout 2007, the two organizations were about equal in size, and maintained an unfriendly rivalry.

The GSO started off on Iain de Vembria's micronations.net forum. When this closed, it switched to a spot on Will Tomsett's MicroHub forum. At no point did it ever have its own board; although it had its own website, at www.geostandards.org, no copy currently exists.

The GSO's map, Giess, consisted of four main continents: Novgard, Iotnargard, Grandica, and Novasolum. Grandica was self-consciously created in the image of the Grand Commonwealth, one of the great powers of the day, and hosted many of the GC nations. Novasolum was named after the Micras continent of Novasolum, and included Darcy's empire of Anthelia. Novgard, isolated in the west, hosted both Babkha and Stormark. Iotnargard was a "wild" continent, and there were a few RPs about people sending explorers to open up and colonize it.

The focus of the GSO's territory policy was in exploration and colonization. Instead of submitting claims based on activity, like at the MCS, nations claimed GSO territory by posting role-plays in which they simulated exploring an area and starting a colony.

Most activity upon Giess was this sort of colonizing and claiming, with the occasional recwar. The Grand Commonwealth constructed an interdimensional portal, the Hurmu Gate, which allowed travel between Micras and Giess; this was intended to unify the economies and strategic picture of the two worlds, but it never really caught on.

The Decline of Giess

Several factors contributed to Giess' decline and eventual destruction in 2008 through 2009.

First, the choice to use AutoRealm for updates became more and more questionable as the people with the AutoRealm file either never showed up or refused to let other people use it. Because only .pngs of the map were released to the public and the original AutoRealm was kept as a "trade secret", only a few "head honchos" of the organization could actually update the map, and these people were often chronically inactive. John Darcy himself suffered from increasing business and personal commitments during this period and was unable to update consistently. The MCS loved poking fun at the relative update schedules of the two organizations (MCS several times per week, GSO once every few months).

Second, the promised unified simulation never arrived. This was mainly because of Darcy's frequent absences, but also because making a simulation and getting lots of countries to agree to it is really hard, and the GSO had not fully appreciated this beforehand.

Third, in a major stroke of luck, most of the new nations of the "Lovely Sector", the major influx of micronations that occurred with Danny Wallace's TV program "How To Start Your Own Country", chose the MCS rather than the GSO. This centered more and more activity around the MCS, while the GSO was becoming less and less active due to infrequent updates and the lack of a coherent simulation strategy.

Finally, in a move worthy of the Counter-Reformation, the MCS took great strides in addressing the issues that made the GSO seem attractive in the first place. The "dictatorial" Chief Cartographer position was replaced by a council of five people plus a less despotic Administrator-General. The organization ratified a constitution that contained clauses for removing MCS officials if necessary. The departure of many large nations to the GSO freed up huge swathes of land, ironically solving one of the problems that had made them leave in the first place. And the creation of new "special maps" made the graphics less of an issue.

In August 2009, the GSO closed for good, with most GSO nations returning to Micras.