New Lindstrom is a scientific research base on Tarsica, Micras' natural satellite. It is a continuing mission of the Natopian Defense Force's Spacefleet. It was launched from Micras orbit as the spaceframe of a pre-refit Imperial-class carrier. It landed on Tarsica and was reconfigured into a permanent base. It has several launch bays, crew habitats, air recylcers, and an aeroponics garden. It's original code name was Tarsican Base Alpha, implying future colonies. However, after the disappearance of Giess, space travel, defense, and exploration lost much of its appeal and purpose from a government point of view.

A group of Hazel people, displaced by a catastrophic fire, migrated to New Lindstrom and built the Guinevere Dome which has regrown the unique flora from the Great Hazel Woods.

The inaugural mission of the Natopian Spacefleet involved a small task force of three Virgo-class shuttles, the NSS Shepherd, the NSS Chow Dhury, and the NSS Azillin touching town on the Tarsican surface near the largest of the moon's equitorial lakes. This mission began in XIII.1512 and was completed by XIV.1512, during which the task force mapped out several possible sites for a long term colony.

Plans were approved for an orbital, international space station by V.1515. Several nations assisted, including Alexandria. It was completed by XI.1519 and used as the primary Micras-side waypoint for interstellar traffic between Micras and Giess until that planet's mysterious disappearance.

New Lindstrom in its original configuration

Designs for a Tarsican colony were drawn up by Natopia's Aeronautics and Space Shipyards in IX.1519. The base was designed on the modular, unfinished spaceframe of a pre-refit Imperial-class carrier. The components were constructed in orbit at the Natopian International Space Station and towed to the moon where they were assembled in situ.

The NSS Empire hauled the first, stand-alone module to Tarsica in VI.1520, and the base was habitable by the end of that month. 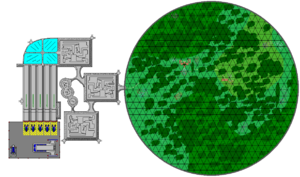 In 1622, following the destruction of the Great Hazel Woods, Emperor Naian Moonoak began Project Guinevere in V.1622. Named after his mother, the project would construct a large biodome next to the research base. Inside the dome, the special hazelnuts from the Tree Spirits would be able to regrow in relative peace. Although the environment was harsh and the project was among the most expensive undertaken in Natopian history. The dome was completed in 1623 when it was declared to be an extramicran territory of Flaventia known as Moonoak Thicket.

After nearly 166 years of operation, Natopia's Tarsican colony is in need of severe updates and overhauling. Interest in space exploration has seen a resurgence and the defense of the antiquated base has been called into question by both Natopian Spacefleet admirals and Raspur Pact administrators. As Natopia is the primary nation for the Pact's orbital and extramicran defenses, the Pact has recently begun to suggest expanding New Lindstrom into a larger colony.

The Hurmu Gate Network is planned to connect New Lindstrom to Micras by a gate in 1708, called the Tarsica Gate. This would allow (restricted) instantaneous travel between New Lindstrom, on one part, and Cherry Trees (