From MicrasWiki
(Redirected from Vesüha)
Jump to navigationJump to search

The names Vesüha, Huyenkula, Hichanberg, and Yanqul are co-official names of the city, and thus, postal services recognise all variants. In 1710, the Parlerment adopted a resolution designating Huyenkula as the first official name of the city. 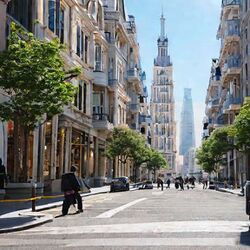 The commercial district of the city, situated to the west of Parlerment House and to the southeast of the New Quarter, grew markedly during the early decades of the eighteenth century after Norton.

The capital houses one of the major cantonments of the Hurmu Peace Corps and serves as the site of the General Headquarters for the HPC's Home Command. Garrisoned in the city are the 36th Command & Control Regiment, the 37th Senatens livgarderegemente, the 38th Honourable Regiment of Artillery, the 39th Regiment of Mounted Rifles, the 41st Regiment of Peacekeepers, the 60th Signals Regiment, the 66th Depot & Logistics Regiment, the 86th Medical Regiment, 98th Field Engineering Regiment, 102nd Electrical & Mechanical Engineers Regiment, and the 111th General Service Regiment.

The Allied Mission in Eastern Apollonia, Hurmu & Lyrica rotates a regiment through the capital district on an annual basis, with each national contingent obliged to provide the contribution to the garrison on a given year, according to the following schedule:

Sensitive sites around the city are also protected by the 71st Anti-air Artillery Regiment, with 24x Silver Hammer surface-to-air missile systems. Furthermore, four launchers for the Geneva 2 system complex positioned at the international airport provide an additional layer of anti-ballistic missile defence for the city.

The Parlerment and the ministry buildings of the Hurmu government, along with the strategic infrastructure of the Hurmu Gate Network, are protected by the Senatens livgarderegemente, with a Watch Troop of forty men assigned to each venue to provide an armed ceremonial guard. An armoured squadron and two cohorts of motorised infantry from the regiment are held available at heightened readiness in order to provide a quick response to any emergency.

The city is also the site of the Headquarters' Group and Training Section of the Hurmu Constabulary, which have occupied buildings on the "Parliamentary Estate" and make use of the surrounding grounds. Law and order within the city falls under the purview of a County Inspector of the 1st Class, equivalent in rank to a major, supported by parish constables and volunteers from the 1st Division of the Special Auxiliary Constabulary who maintain and garrison the parish blockhouses and conduct neighbourhood patrols. Constabulary duties also encompass the protection of Parlerment and the cabinet, which is interpreted as providing close protection for the ministers, senators and assemblymen - a duty undertaken by the Specialist Fire Arms Section of the Headquarters' Group.

Security for the capital was formerly provided by the 12th and 22nd Kalisa Rrumëli Field Battalions garrisoned in the city to protect Parlerment and the buildings occupied by the Cabinet of Daniyal al-Osman. Following the scaling down of the Sanaman contribution to the Allied Reconstruction Mission in Hurmu during 1692 AN these were replaced by the North Lyrican Marine Infantry Brigade contributed by Alduria-Wechua. The garrison in the city could also call upon the 11th Kalisa Rrumëli Field Battalion billeted at the village of Quernass nearby and the 135th Motorised Infantry Regiment of the Black Legions and the Sanaman 13th Army Aviation Detachment, both stationed at Huyenkula International Airport.