The Federation of Alduria and the Wechua Nation, also known as Alduria-Wechua or the Alduro-Wechua Federation, is a confederation of two formerly sovereign nations, Alduria and the Wechua Nation. Its territory covers land and islands in northwestern Eura and near central Keltia. The status of capital of the Federation is shared between its two most important cities: Parap as its executive and administrative center, and Punta Santiago as its legislative and judicial center. Other major urban areas include the cities of Rimarima, Piriya, Behaurnais, Fort Laons, and San Luis. The federation has a population of 185,247,071 inhabitants as of 1691 AN.

Alduria-Wechua is a multinational state with a federal and secular parliamentary monarchy, with King Manco Capac as head of state and President of the Government Jean-Michel Lavaud as its head of government. Its current government is the product of a transitional constitutional arrangement negotiated and put in place by the Committee for Aldu-Wechu Integration, after ratification by both nation's legislatures and heads of state. The transitional government shall govern the country for one AN year before the new Federal Constitution and other transitional matters are settled by the Federal Constituent Assembly.

The names of the Federation reflects the union of two sovereign states, Alduria and the Wechua Nation. The name Alduria originates from the rise of the Altusian Republic, a stratocracy formed by the Armée Altusienne Unie centered around a group of former Alexandrian city-states in the Euran continent. One of the constituent city-states that formed Altus was called Alduria. The name came from the family of an old Alexandrian merchant turned noble called Aldur Gerzog. The Gerzog family went on to found several lucrative regional businesses that attracted capital and talent to the small settlement and invested heavily in its development. The venture ended when it was seized by the Armée Altusienne Unie in 1656 AN. But as fast as Altus rose, it was torn apart just as quickly, leading to the flight of Alduria's delegation to the Altusian Senate to the city of Punta Santiago. The group of Senators went on to occupy key positions of power and leadership in the region. During the debate over what to name the new nation in the Constituent Assembly that was designing the new nation, the delegates settled on the name of Alduria by a landslide, proposed by one of those escaping Senators (and later future 1st President of Alduria and of the Federation) Alejandro Santos. 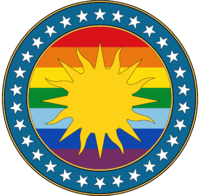