From MicrasWiki
(Redirected from Suren)
Jump to navigationJump to search

The Suren Confederacy is a developing nation, set amidst the heavily irradiated, environmentally degraded, and ever prone to desertification, north-eastern portion of the continent of Eura. Notable for its veneration of the continent's Babkhan heritage, the mismatch between an autocratic monarchy and a fractious confederal system of government, and for the numerous quixotic attempts at a crash-course industrialisation effort to catch up with the rest of the world that has moved on in the century since Eura's atomic self-immolation. 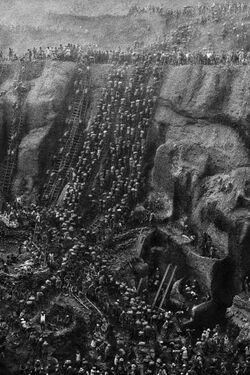 Mining in the Surenid Highlands is a labour intensive proposition that draws in vast numbers of Androphagi, recruited via razzias conducted into the Euran interior.

The Zjandarian steppe has an extreme continental climate; most of the country is open plain, with enough rain in the north, from the sub-tropical Norashti coast, for extensive wheat farming, but turning to grasslands and then desert further south. The large-scale irrigation networks built over the span of centuries swiftly fell into ruins following the Babkhan Holocaust of 1598, and irradiated dead zones, together with stretches of glassed desert, still mark the destruction of the old Babkhan kingdom. Tentative efforts at a revival of agriculture have focused upon boring down into the deep continental aquifers to draw up the life-giving waters for new experimental cotton plantations, however this in turn has led to saline soil problems that have rapidly become evident.

The desert winds of the inner Euran hellscape continue to whip up and deposit clouds of radioactive ash which can blanket vast swathes of the country, with deleterious effects on farming and human habitation, necessitating the development of shelters and survival strategies for both.

Salt deposits, where they are clear of contamination, are in and of themselves vital for the prospective revival of the society. The largest concentrations of these, along with such hydrocarbon deposits as have thus far been identified, are to be found in the lands of the Suren Ostan, the south-western limb of the confederacy. Though much of the Suren Ostan is flat desert and semi-desert, the high mountains of the north-west are a major source for the rivers which flow in a south easterly direction towards Lake Erik and the Androphagi megariver. Irrigation networks repaired here yield cotton and the mulberry trees vital for harvesting silkworm while the poor mountain and desert pasturage. Copper, gold, iron, chromium, and other mineral deposits located in the Durranian highland regions hint at the possibility of future prosperity if they can be secured against Constancian competitors.

The right of the Surenšāh to exercise sovereignty over the confederacy rests a claim to have been in receipt of the immutable blessings of Zurvan, and the sublime grace of the highest divinity thereby, on account of the three meritorious deeds claimed by his lineage:

The Bab-e Dīvān (Gate of the Council), an antechamber to the entrance hall of the throne-room of the Surenshah from which a nest of eunuchs and the incense-smogged droners of forgotten rites had been expelled, housed the reformed executive council which sat from 1.XV.1690 AN onwards and which took its name from the new location.

The 300 strong Majles-e Suren approves laws and can examine or investigate all affairs of the country. The Majlis is dominated by the Surenshah, chosen from the House of Suren with tenure for life, and acclaimed by the Satraps of the confederacy's provinces. Aside from the Surenshah the most preeminent individual is the Speaker, who presides over the workings of the Majlis, confirming the validity of its votes and ensuring that receive its summons adhere and submit to its authority.

The first Majlis sat from 1687 to 1690 whereupon the Surenšāh declared himself dissatisfied with the conduct of the body - advising the delegates of this as he oversaw their crucifixion. The laws passed by the Majlis were declared void and its records burnt.

There was therefore much trepidation in the land when the summons went out for a fresh Majlis to convene.

They hold office for four years. Political parties were expressly forbidden prior to the formation of the Surenid National Sector Party of the Nationalist & Humanist Party. All members of the Majlis were thereafter dutifully enrolled into the N&H, over which the Surenshahr presided as National Sector Leader, or "Archon" in the N&H terminology. 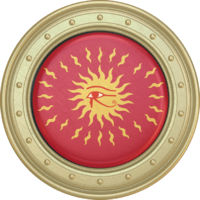 Emblem of the Popular Levy, adopted in 1692 AN following the incorporation of the Suren into the Raspur Pact.

The Anjuman-i Ma'arf (Education Committee) was established under the 1697 National Education Act passed by the Majles-e Suren and promulgated through a Farman of Endorsement issued by the Imperial Court in the name of the Shahbanu.

In 1689, alarmed by the 11 Khordad 1688 in Zeed, a sprawling chaotic domain in southern Eura, and the arrival of revolutionary forces in the Ḡur Khanate on its southern border, the Suren Confederacy mobilised four brigades of the Popular Levy and dispatched them towards the south. At the same time, noting the involvement of cadres of the N&H with the revolutionary violence directed at a brother monarch, the erstwhile and quite possibly late Tzjar of Zeed, and concerned at the implications of the strong associations between senior figures of the N&H and the Honourable Company, the Suren ordered the expulsion of all ESB employees from the Confederacy whilst introducing stringent new border checks along the Pan-Euran Highway.

The foundation of the Confederacy and its subsequent administration had rested upon the cooperation of the Surenšāh and the Grand Vizier as mirrored in that of the partnership between husband and wife, in the union of Dāryuš and the Bānū Aspadanadoḵt. The alliance of the Suren and the Aspadana was the bedrock of the confederacy and thus it is only natural that the state was personified by the monopolisation of executive power on the part of the sovereign and she who shared the marital bed, as a symbol of the unity of purpose combining the two great factions of the confederacy.

By the dying days of 1690 AN this arrangement was no longer satisfactory for the Surenshah, who was increasingly impatient with the slow rate of reform and reconstruction in the confederacy, being acutely aware of the precarious position of the Suren who were caught between the antagonistic power blocs of the Raspur Pact and USSO and ill-prepared to face the rising nations of Nova Caradia and Zeed.

Faced with the invidious task of dismissing his wife from public office the Surenshah, perhaps understandably, followed the path of least resistance and instead "promoted" her, as a face-saving compromise, to the new office of Darik-Pat, steward of the royal household and custodian of its estates and treasuries, whilst ordering the creation of new regalia for the Shahbanu and the Imperial Mother-in-law. Meanwhile the office of the grand vizierate was itself abolished and replaced by the Astabadh, an official responsible for diplomacy, tax collection, negotiation with the provinces, economic development and the overseeing of construction works.

The Third Euran War, commenced in 1693 AN, had proceeded dismally for the Suren. The Gendarmes and Popular Levy struggled to contain the influx of Zeedic infantry, disguised as Tudeh guerrilla fighters, while Constancia, shocked at the loss of six corvettes in quick succession, had limited its engagement in the conflict to the provision of air support and tactical advisors. While Nouvelle Alexandrie remained ostensibly neutral, the transfer of armaments to the Surenid under the Fontainebleau Accords, especially of large numbers of light attack aircraft, had helped blunt a rapid Zeedic advance on Surenshahr during 1694 AN. The death of the Surenshah on 24.VII of the same year, slain in a contrived dual that was staged on the margins of the Humanist Convention, upended the political situation in the Suren Confederacy. Menaced by the prospect of collapse and a swift Zeedic revolutionary takeover, the disorientated Surenid court had meekly acquiesced when the Trans-Euran Command had installed the late Shah's sister, Mitradokht on the throne, backed by the Constancian Foreign Legion, a team of advisors from the Honourable Company, and such partisans of the N&H as could be assembled into a Vanguard Division.

A combination of allied air power, and the use of raiding parties to hit the over-extended Zeedic supply lines, was able to further stymie the insurgent cause. The termination of the Second Elwynnese Civil War had further underscored the futility of continued fighting on the part of the Anti-Pact forces, however the brutal nature of the Scouring, and the adverse reaction of allies and neutrals alike, had precluded the possibility of similar methods being brought to bear against the enemy here - especially when the Suren were living amongst the tainted legacy of a continent whose ancient civilisation had been brought low by the use of atomic weaponry in the pursuit of internecine strife.

By 1699 AN, now with the full support of Constancia and Nouvelle Alexandrie through the Trans-Euran Command and the Euran Economic Union, the course of the war had turned firmly in the favour of the Suren, and a counteroffensive had pushed deep into Zeedic territory. However this progress was still not enough to satisfy the Shahbanu Mitradokht, as the grizzly execution of Paykar Khan - disembowelled on a windlass for querying an order to invade a country of steep mountainous valleys in the height of winter - amply demonstrated.

The Suren remain socially conservative, as befits their Neo-Babkhan state, adhering to the stipulations of the Harmonious Society Act, as evidenced by the status of LGBT rights in the Suren Confederacy.