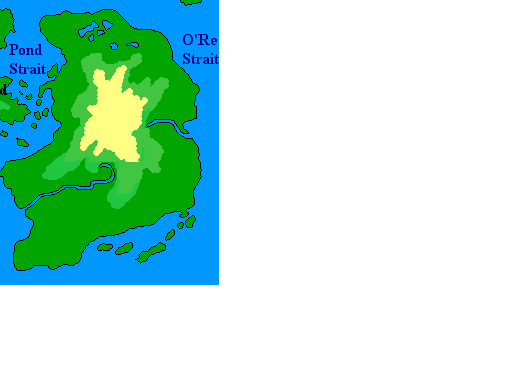 Lyrica is the largest island on Micras if one ignores continents. It was also the location of the micronation of the same name.

Lyrica is one of three island areas whose geography predates the MCS. It was originally the map for the country of (predictably) Lyrica, a representative democracy founded around 1999. During the negotiations for Lyrica to join the fledgling MCS, in 2001, the cartographers agreed to add Lyrica's existing geography into the new map of the Eastern Hemisphere. Lyrica died soon after, but its geography endures to this day.

Lyrica is mostly flat, with only a few small hills in the center. It has three rivers and is surrounded by smaller islands.

Lyrica was originally inhabited by Lyricans, but their culture died out before Series Four. For most of 2003 and 2004 it was empty, save for a small Buddhist-themed nation called Rendang, an Atteran colony, and Prinitican settlements. In late 2003, the infamous HURMU REPUBLIC occupied the small lake region in the north, which was holy to their people; it continues to hold these lakes today. The rest of the island is now the capital territories of Stormark; the Stormarkian capital Haraldsborg is at about the same latitude as the old Lyrican capital, but on the opposite coast of the island.