Lindström is currently its own administrative division, separate from all other demesnes and territories of Natopia. The island of Ptia, which is administered directly by Empire Library, is an exclave of the city. Due to the long history of Lindström as a royal city under the rule of the Waffel-Paine family, the House of Waffel-Paine claims the title Grand Mayor of Lindstrom City as an ancestral title that is granted to the current Emperor. The title is purely ceremonial and carries no legal power over the city. As a region of the Empire independent from the demesnes, the city is governed directly by the Imperial Government, with the Frenzy and Chancellor able to enact laws and policies. In practice, the city is administered by the Capital City Services Administration, a department of the Imperial Chancellery of Natopia. A city director, appointed by the Chancellor, serves as city manager and a devolved, elected, city council decides local policies such as healthcare, education, policing, and general civic services. 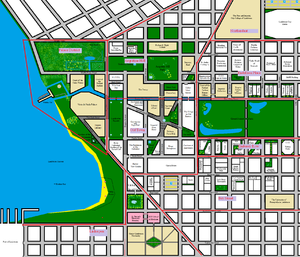