From MicrasWiki
(Redirected from Empire Library)
Jump to navigationJump to search 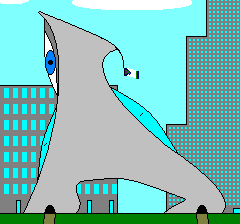 Empire Library's main building sits on Lindstrom's coast, overlooking Lindstrom Harbor and Borders Bay. It is one of Natopia's oldest buildings along with Vista de Nada, the Frenzy, the Supreme Court, and the Lindstrom Convention Hall.

Empire Library is designed as a vaguely leonine building with large domed windows on its 'chest' and 'back' providing natural light to the library's reading rooms. The upper section is a stained glass eye motif, which gazes out over the Bay.