The Sanaman Union of People's Republics is a democratic country in southern Benacia, constituting the successor to the previous Democratic Republic of Sanama, which fell on 3.II.1701 during the latter stage of the Sanaman Civil War. With the secession of the Republic of Cisamarra and the Democratic Humanist Republic of Highpass, as well as the cession of Shimmerspring and most of Thanatos and So Sara, the SFPR has been reduced to Amarra and Sanilla and some adjacent areas. After gaining independence from Shireroth in 1671 the country has gone through several major upheavals, revolts and reformations. As a former communalist country following the Sanaman Civil War, since 1707 it is organised along more traditional lines, albeit with a tricameral legislature and a parliamentary system. A new national constitution was passed in a referendum in 1707.

The Sanilla and Amarra Liberation Army for Democracy declared independence on behalf of Sanama in 1671 as a consequence of the Kalirion Fracture. The Kalirion Fracture sent the local government into disarray. Years upon years of debauchery and excesses in the nobility had lead to a government in all but name. Fueled by the outrage of the working masses at the discrimination leveled against them by the bourgeoisie landowners and nobility, the SALAD quickly took control of the former county of Amarr. They rapidly expanded along the coast to the east, enjoying massive support among the Sanaman people. The islands of Ž and Azarea also joined after local uprisings.

On 12.X.1671 the SALAD leaders announced that Sanama had been liberated from fascists and imperialists. They announced elections for local citizens' assemblies to take place on 15-16.X.1672. The SALAD leadership committed to not fielding any candidates nor participate as a party in the election. It also launched a campaign to get people to vote, with efforts to educate the people. The SALAD was succeeded by the Sanaman Liberation Front.

Sanama disputed southern Highpass with the local bourgeoisie and a low intensive war broke out along a line of control. The claim was later temporarily abandoned and a treaty reached with Shireroth.

In 1672 the provisional government adopted the Natopian natopo as the currency of Sanama. The Shirerithian Erb had been used up until then, but since the Kalirion Fracture, that currency was in free fall. To stabilize prices and secure the important revenue from oil exports, the government unilaterally adopted the natopo. On 2.V.1673, the people of Sanama voted to change the official name of the country from the Democratic Federation of Sanilla and Amarra to the Democratic Federation of Sanama.

In XV.1678 General Adalwolf Hiedler took power in the 1678 Sanaman coup d'etat and established a military junta. The rule of the junta quickly descended into repression and violence, fueling mass protests. On 21.III.1679, an increasingly insane Hiedler proclaimed himself King of the Sanamans. About three weeks later, he was assassinated in the Lakhesis Incident, after which Councillor Amarlic Woehrle handed ultimate state power back to civilian authority.

On 12.X.1679 elections were held to the new legislature and the newly established presidency, marking the beginning of the Second Republic. During this period, the coalition between the United Nationalist Alliance and the Sanaman National Party dominated national politics, under the presidency of Keysa Nur Pinito Caprici, with Tanilo Lhayi as Chancellor in the beginning. The period saw an unprecedented expansion in the Sanaman military as well as the overall Sanaman economy, after the governing coalition liberalised key areas of the economy, while keeping a tight grip on those sectors deemed most important to national security.

After an economic downturn during 1686 which the provinces were unable to handle, the Second Republic came to an end on 1.I.1687, when Sanama transferred to a unitary state, with extensive devolution to three autonomous countries. The economic downturn led to a decisive victory for the center-left coalition consisting of the Sanaman Liberation Front and Coalition 1660, ushering in a period of cohabitation with the center-right president Nur Pinito Caprici. The first period of cohabitation was marred by conflict between the Council of State on one hand, and the President on the other, with the President making strategic use of her veto powers. However, the constitutional requirement to not veto measures included in the Chancellor's Programme was respected. After the government under SLF Chancellor Taliya Wilamu failed to adequately recover the economy and adopt decisive national security measures, as well as a scandal in the UGB involving Coalition 1660 played out just before the 1691 election, the center-right Alliance for Prosperity came back into power, now with the roles from 1679 reversed, with Nur Pinito Caprici as Chancellor and Tanilo Lhayi as President. The Nationalist & Humanist Party, newly admitted to the AfP, made sure that they would enjoy a comfortable majority in the Lhusan.

After treason by the Democratic Humanist Party and its leader Jasmina Hosseini, and the failure to form a stable government after the 1697 election, Sanama descended into the Sanaman Civil War (1698–1702). The Sanamati Democratic Party with the People's Defence Force emerged victorious in Sanama proper, while Cisamarra and Highpass seceded and Shireroth annexed Shimmerspring, Thanatos and So Sara. The elected government under Chancellor Keysa Nur Pinito Caprici went into exile in Sanaman Cibola. The Port Esther Summit established the new Sanaman polity under a communalist federation, while nationalists formed a republic in Cisamarra and Humanists formed a new regime in Highpass. Following a social-democratic coup in the ruling Sanamati Democratic Party, the populace once again passed a new constitution in 1707, replacing the vaguery of the communalist polity with a more traditional unitary state.

Since 1702 Sanama consists of a strip of land in southern Benacia, stretching from the X Catambria Peninsula in Cisamarra in the west, to Twoggle in Shireroth in the east. It is bounded by the Kortilhera Mountains in the north and northwest and several rivers along the border with Shireroth. Along the southern coast are a number of islands, including the Ailan Feq, former Yardistani islands retained by Sanama following the Port Esther Summit and end of the Sanaman Civil War. Large areas of Sanama are covered in tropical and temperate forests, interspersed with farmland. Farmland is to a large extent rice fields, but grazing land for cattle and plantations for bananas, pineapples, mangos, papaya, and several other types of fruit is also very common. Several lakes and rivers cross the Sanaman countryside, fed by water from the Kortilheras as well as the frequent monsoons during the rainy season. The country is often hit by large storms during the rainy season that usually affect the islands and southern coast most. The Kortilheras also get plenty of rain on the Sanaman side as fronts are pushed up the steep mountain range, contributing to the more savannah and steppe-like environment in Highpass.

The Sanaman value system is primarily based on personal alliances, especially those based on family, friendship and religion (particularly Somanes). Sanaman values emphasise maintaining harmony in society, motivated by group inclusion. The primary penalty for deviating from these values is the concept of "peya", translated as a sense of shame. Most Sanamans are concerned with social approval, being accepted and belonging to society. Caring about what others will say or think is a strong influence on social behavior. There is also the sense of "tapu", meaning a moderately strong taboo against discussing other people's private affairs in public. Other aspects of Sanaman values are a concern for the wellbeing of society as a whole, concern and care for other people, especially the poor and elderly, friendship, hospitability, respectfulness to others, and a strong dislike for dishonesty, cheating and taking advantage of others. 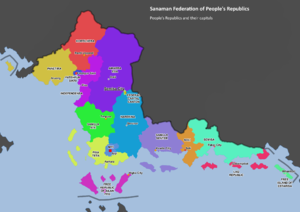 People's Republics and their capitals, 1703.

Sanama is divided into four tiers of subdivisions:

On the neighborhood level, parakal committees are formed to handle local issues, neighborhood security, and a forum for dialogue and reconciliation. Following the new constitution from 1707, the people's republics are no longer sovereign entities, instead forming subdivisions within a unitary state.

Sanama has an extensive network of roads. Many of the routes were already in place at independence, but a conscious effort has been made to expand the network. The Sanaman Union Highway Network (SUHS) serves all the major urban areas, from Oya in the west to Pakor City in the east. The highways are numbered M1 through M46, with more planned. In more rural areas they are usually dual carriageways with two lanes each, while in urban areas they can have up to six lanes in each direction. The maximum speed is usually 130 km/h, but in urban areas it can be as low as 50 km/h depending on traffic density. Sanama also has a growing railway network. The standard gauge is 1,435 mm, with some narrow gauge legacy lines, especially around Niyi. A high speed line runs from Acquecalde in Cisamarra, through Fatehpur Sikri to Pixa, Kopore and Port Niyi, where it turns east heading to Niyi and Kawite City with terminus in Soli. The high speed line is about 1,550 km long. There is a conscious effort to expand the railway system, with new lines being added every year, especially to connect the main urban areas, but also in more urban areas. The goal is to promote more environmentally friendly modes of transportation, while also encouraging economic growth.