The Sanaman language, xele sanamali, formerly called Lakhesian by the colonial power Shireroth and Sani/Ama, is a Cosimo-Benacian language spoken by approximately 55 million people in Sanama and Talenore. Sanaman is an ergative-absolutive agglutinating language. It has two orthographic standards, called Sani and Ama. It is also related to the divergent Estarisan. Around 50 million speakers can be found in Sanama, and 5 million in Talenore. It is an official language in Talenore and the main official language in Sanama.

The Sanaman language is the proposed common name for the Sani and Ama languages. The two languages are almost entirely mutually intelligible, differing only slightly in orthography, word choice and pronunciation. While speakers of a western dialect of Ama and an eastern dialect of Sani might struggle to understand each other in certain circumstances, exposure to different dialects increase understanding dramatically. Many Sanis and Amas push back against the notion of a common language, stressing the many perceived differences between the two standards. In 1680 the new government lead by the United Nationalist Alliance started promoting the notion of a common Sanaman ethnicity, comprising both the Ama and the Sani peoples. The federal census of 1680 also classed the Sani and Ama as Sanaman for the first time.

Sanaman is an official language in Sanama and recognised for local official use in Talenore.

Sanaman is spoken natively in western, central, southern and southeastern Sanama, in the areas traditionally called Sanilla and Amarra. It has its strongest position outside the large cities. In rural areas and smaller cities and towns, it is by far the majority language. In larger cities, like Niyi, it has a much weaker position, usually in favor of Istvani. In the entire country of Sanama, 60 percent of all people speak Sanaman as their first language. 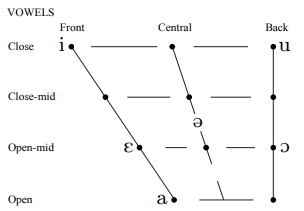 Verbs in Sanaman are modified to express aspect and modality, but not tense. Tense is instead indicated by a combination of aspect, mood and time adverbial construction.

Sanaman uses several aspects and indicate them by affixes and infixes.

Sanaman expresses modality by affixes to the verb.

Sanaman is a verb-subject-object language, where the direct object precedes any indirect objects. However, given that the language is highly agglutinating, word order is also quite free. The internal phrase structure is right-branching, meaning that the head of the phrase precedes its determiners. Many determiners are expressed as suffixes instead of as separate words, especially what in Istvanistani would be expressed through adjectives, adverbs and prepositions.