The Rice Riots of 1697 transitioned into the Sanaman Civil War in Puwha Kawlapali (IV) 1698 following the Malliki Tosha Plaza Massacre and a general breakdown of the government's ability to maintain public order, leading to the national government losing effective control over large parts of the country, leaving large swaths of both urban and rural territory in the hands of various armed militias, most notably those aligned with the Peoples' Front and those aligned with the Democratic Humanist Party. In IV.1700 Sanaman authorities revealed that several SDP sympathisers working in military intelligence had been identified and arrested. The authorities noted that the treason was limited to a few isolated incidents. However, anonymous sources within the military painted a completely different picture, stressing that rebel collaboration was rampant, especially within military intelligence and strategic planning. The problem was so extensive that planners had started transitioning back to hand drawn paper maps sent by courier to try to maintain mission integrity.

The elected national government of Sanama, led by Chancellor Keysa Nur Pinito Caprici from the United Nationalist Alliance. The national government was composed of the United Nationalist Alliance and the Democratic Humanist Party until the 1697 Sanaman attempted military coup d'état where the leadership of the DHP was a co-conspirator. Since the government was still technically a transitional one, Nur Pinito Caprici was not allowed to appoint new ministers to the replace the DHP defectors, leaving the Council of State overworked and overstretched. The fractured nature of the government controlled territory, middling morale in the reduced and underpayed military and many SDP and DHP sympathisers in its ranks, led to the military suffering from desertion and defection from day one.

Supported by the Raspur Pact.

The proto-polity organised by the Sanamati Democratic Party to fight against the national government and the DHP. The stated goal of the SFPR was the liberation of Sanama and the establishment of a communalist, socialist, feminist and ecological democratic state. Led by the Sanamati Democratic Party and its allies in the Peoples' Front, at the outset of the war the federation consisted of eight democratic people's republics. The republics controlled limited and discontinuous territories across Sanama, often surrounded by government and Humanist territories. Early in the war, rebel forces were loosely organised into combat units consisting of 1,000 fighters, which in turn were grouped into Combat Groups of five Combat Units. The units and groups had barebones staff coordinating combat operations within their area, without a formalised command structure. No overall command of the People's Defence Forces existed during most of the war, although coordination and communication between the PRs increased over time.

Members of the federation at the onset of the war:

Covert support from Shireroth for the East Sanillan PR via Clans Naśećyže'u and Yliekimśhu. Support from Zeed in the form of sale of military hardware, mostly armoured vehicles.

The umbrella polity for the areas controlled and organised by the Democratic Humanist Party. After having shed the democratic veneer imposed by Jasmina Hosseini to make the party electable in Sanama, the DHP fell completely in line with the N&H policies in the Benacian Union, currying their favour and support. Initially very successful, particularly in northern and western Highpass, but as the war went on, more and more beleaguered elsewhere. Support in the form of weapons, vehicles, money and volunteers flowed over the border from the UGB, but rarely reached beyond Highpass due to the fractured nature of the areas under DHP control. Managed to in some instances make strategic alliances with other entities. Supported by the N&H Vanguard divisions participating in the N&H Field Camp in Highpass.

The following entities made up the BRAHS at the beginning of the civil war:

Supported by the Benacian Union. Additionally, N&H cadres in mainland Drak-Modan who had not reached the evacuation point in Twoggle prior to the Shirerithian takeover were instructed to relocate to the Eastern Governorate as best they were able, so as to reinforce the regional sector cadre there.

Five other entities controlled territory in Sanama shortly after the onset of the war. Dubbed the Nationalists, all five entities identified as nationalist and separatist. To a varying degree, all the territories under their control were havens for drug and weapons smuggling and human trafficking. Local leaders espoused democratic ideals in public, but ruled their territories as personal fiefdoms. The Laq Republic early struck a deal with the East Sanillan DPR for a strategic non-aggression agreement, allowing both factions to focus their attention on fighting the government and the Humanists.

Covert support from Shireroth for the Laq Republic via Clan Moel. 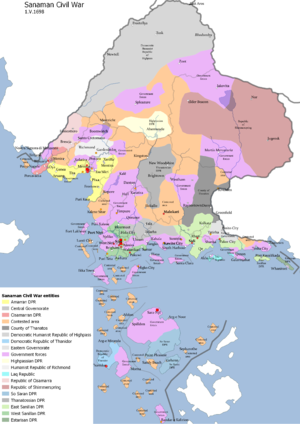 Factional control at the outset of the war.

The Rice Riots transitioned into the civil war in Puwha Kawlapali (IV) 1698, with Peoples' Front and Democratic Humanist Party militias forming and taking over large areas of Sanama, with the stated intent of guaranteeing public safety and order. The dominant party in the PF, the Sanaman Liberation Front (revolutionary) changed name to the Sanamati Democratic Party (Tatawal Koslhen Sharamyaya Sanamati), with "Sanamati" being a neologism meaning "Sanaman person" in the wider sense of a citizen of the Sanaman state. At the same time, the TKSS assumed supreme guidanceship over the Peoples' Front, with the other parties becoming entities within the wider TKSS. The TKSS also established several democratic people's republics across Sanama to organise the struggle against the government and other militias, while providing services and a governing framework for the areas under its control.

The communalist groups formed around the TKSS coalesced into a growing popular movement, where more and more people joined the revolutionary forces. Many sympathisers also engaged in other ways, such as organising citizen's committees, local public safety groups, supply runs, and other kinds of direct and indirect support. The various groups soon consolidated a number of areas under their control. The Cisamarran Democratic People's Republic formed in the west, from Porcavacca on the Napole peninsula all the way up and past Acquecalde, bordering in the east to the Amarran DPR, controlling much of the Amarran coast and large parts of Fatehpur Sikri. In the south and southeast, the Western and Eastern Sanillan DPR's formed with a combined leadership, controlling four separate areas. The western part formed in and around Niyi, the central around Soli and Rhan, the eastern from Pakor City and eastwards, while the fourth area was the entire island of Kayalëkada. Local uprisings in Brightown and New Woodshire in Thanatos quickly formed the Thanatossian DPR, and in Highpass the Highpassian DPR formed centered on Abermeade. The final DPR formed on So Sara and Gehenn after local Yardistani farmers joined the communalist cause against oppressive government and fascism. Simultaneously old civil service cadres, leftover Shirerithian administrative cadres and downsized military personnel joined the Democratic Humanist Party, taking over three smaller pockets in Amarra and Sanilla: one centered on Richmond and Gardenholm, one stretching across central Sanilla and one centered on Pinito City. The most successful Humanist entity was though the Democratic Humanist Republic of Highpass, controlling most of northern, central and western Highpass, owing much of its success to active support from the Benacian Union. The surrender of Rhodondra was a particularly embarrassing debacle for the Sanaman government. In Cisamarra, Thanatos, Z and Thanidor, so-called "Democratic Republics" were also formed. These were however little more than gangs controlled by local strongmen seizing the opportunity when the national government was engaged elsewhere. The democratic republics would prove throughout the war to be havens for drug and arms smuggling and human trafficking.

The Battle of Niyi commenced on 21 Puwha Kawlapali (IV) 1698, when government forces launched a pincer attack targeting the strategically important railway hub in Sanestira, with the intent of cutting off SDPR transports between the north and the south of the SDPR. In response, the SDPR scrambled defences and launched a surprise attack from west of Hala City towards Neliko, aimed at cutting off supply lines between government-controlled western Niyi and Port Niyi.