The economy of the Bovic Empire of the Natopian Nation is a mixed capitalist system with certain mercantilist, socialist, and statist elements. The Natopian economy counts the primary sector as very important, with mining, logging, gas, and fishing among the most important. Natopia is the largest exporter of cotton on Micras, having controlled 3 of the 5 highest producing cotton regions for nearly two centuries. Natopia is an agricultural and food production powerhouse with cotton (x3), grain (x2), farming (x2), cattle, pack animals (x2), wine, game hunting, fishing (x6), fruit, spice (x4). A major section of Natopia's manufacturing sector is chemical processing and shipbuilding, providing vessels for its military, merchant, and private customers. Mining is a critical industry, with silver (x2), semi-precious (x2), gems, chromium, tin, lead, chemicals.

The Natopian government has invested heavily into solar and wind power, bio-fuels, and other alternative and renewable energy sources to offset its lack of native access to oil, coal, and hydroelectricity.

Natopia is a member of the Micras Treaty Organization, and it has several well-established and favorable trading relationships with Constancia, Shireroth, and more...

Natopia is also home to the Hazelwood Stock Exchange, an old stock exchange. 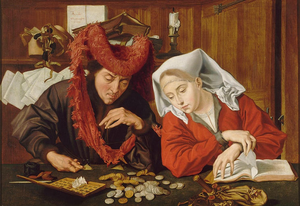 "Robert Davis and his Wife," Marinus van Reymerswaele. Davis, a Gotzer was an influential early financier in Natopia.

"Adoration of the Bank," Grant Wood. Part of a Ministry of Information campaign to instill pride in civic institutions.

The Imperial Bank of the Natopian Nation is the central bank of Natopia. It prints and distributes currency (the Natopian natopo, ₦), collects taxes, and pays government salaries.

Natopia conducts trade using the old MITO system of economic development, which relies on the officially unofficial MCS resource map. Economists in Natopia recognize the MITO system as a way to use pre-existing resource distribution to somewhat accurately mirror the unequal distribution of resources available to nations. In the past it has provided a road map for Natopian expansion and colonial endeavors, guided trade deals with partners, and influenced Natopian history by informing the character of the local economies (agrarian vs fishing vs ranching vs dense urbanization), cuisines, and culture. The crown jewels of Natopia, for example, are made of silver due to easy, nearby access to silver in northern Tapfer and Arboria. The Laval peninsula, with ample grain resources, was seen as a necessity for colonization to feed Natopians' rapacious love of bagels.

The MITO trade system provides Natopian economists and trade negotiators with a record of what resources Natopia has surplus of and what it can offer to trade. It also provides guidance for what Natopia requires to import in order to sustain the Natopian economy, pay for ambitious infrastructure, fund the large military budget, and support its monetary commitments to its citizens, allies, and foreign aid recipients.

The following table is adopted from the original MITO trading spreadsheets. For each resource icon on land that Natopia fully controls, Natopia owns 100% of whatever is produced by that resource and can trade away a certain percentage of it. If there is a foreign neighbor also controlling the node, Natopia only owns 50% of the produced resources. The original requirements for minimum pixel occupation; 25%, 50%, 75% production zones around the nodes; and trading credits have been removed for simplicity. Credit to user:Andreas the Wise

The value for "x" is the total amount produced by native resources divided by 40 and rounded up (3,950/40=98.75). Natopia's amount for "x" is 100 based on access to resources, it is the maximum value for X. Economic development is assessed by access to variety and quantity of goods from each type of resource. Therefore, as Natopia overproduces food and luxury foods, it has a large surplus to trade away in exchange for transport, power, building.

Level of economic development is: 6

Feel free to add to this if a verbal agreement has already been made.