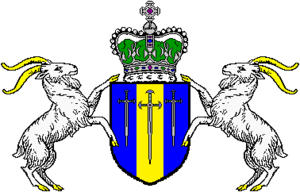 Coat of Arms of the Supreme Court of Natopia

The Court rules on interpretations of Imperial law, or demesne law if a case is brought to it. Members of the Court are appointed by the Emperor and must be confirmed by the Frenzy. Members, other than the Emperor, serve twelve-year terms. Members can be removed by a two-third majority of the Frenzy with confirmation from the Emperor. They may also resign.

Ivo Angus served as Chief Justice until 1666. In the three–four years prior to the end of the Supreme Court, Ivo Angus had become more and more absent from the Court. The laws and regulations governing the court required his activity. As such, the Supreme Court became an unworkable institution. Therefore, the Frenzy decided to create the Court of the Noble Fountain in its stead.