Alternatively titled the War of Nicki's Minaj after the video which led to the Jingdaoese declaration of war or the Penguin Island War after the site of the main theatre of combat operations. The Jingdaoese war-effort seemed to be primarily preoccupied with the extermination of its own restive populace[1], while the declared Shirerithian war objective was the extirpation of Jingdaoese culture and heritage from the continent of Apollonia and the creation of a new independent Kildare in personal union with the Imperial Republic[2].

The chaos and lack of moral in the Jingdaoese Forces (and sometimes even outright refusal to cooperate with the Imperial Court) led to some devastating losses for Jingdao, which prompted the establishment of the Xianfa Constitution. The loss of the Kukegongji (Pinguin Isle) and Zibincheng was the first time foreign troops had set foot on Jingdaoese soil and occupied it for a long period of time.

Tensions between Jingdao and Shireroth had been increasingly high since the commitment of Jingdao to the Jingdaoese-Gerenian Northern Mission. The build up of the fleet in the Northern Sea entered a stage of direct confrontation.

In the mean time, the government lacked any powerful leader, as the Diwang Jung Shun had been ill for a long period of time, unable to make any decisions. Many hoped that the Mingshi Emperor, who had retired to Sankt Simon, would bring answers. The Emperor had been, however, increasingly mentally unstable. Parliamentary investigations led to the widespread belief that the Emperor had been influenced by Shirerithian spies who had disguised themselves as Ergonian beggars.

Things soon escalated, with a declaration of war as response. The sudden move, in combination with relative unpreparedness, was met with unbelief. Purges started against disobedient citizens, and the prospect of introducing civil rights - as promised in the aftermath of the Jingdaoese Spring - were swept aside.

Moral on the Jingdaoese side collapsed before the war had decently started, which only started to change after the ascension of the Xianfa Emperor to the Throne and actual introduction of a constitutional monarchy.

Course of the War

Jingdao's vast military and impressive coastal defence network was actively impaired by the increasingly manifest insanity of the Mingshi Emperor. Although the Imperial Jingdaoese Navy had been heavily committed to the Northern Mission to counter the Shirerithian garrison in Neo Patrova, an appreciable force of warships and submarines should have been available to assist in the defence of Jingdao's western seaboard from Shirerithian naval and airborne incursions.

Instead, the navy remained inactive while Shirerithian corvettes and U-Boats launched a series of cruise missile strikes on military facilities, including munitions depots, air defence nodes and coastal defence missile batteries. This initial missile barrage was followed in short order by a coordinated attack consisting of three waves of strategic bombers targeting Port Nevermore (Yuanbeicheng) and other coastal villages of Bangou Province. The entire fighter strength of the Shirerithian 3rd Tactical Air Force, based in Natopian Arboria, had been committed to provide combat air patrols and top cover for the bombers. However, as with the passivity of the fleet, no opposition was encountered from the Jingdaoese air force and the bombers were able to conduct their obliteration raids upon Jingdaoese barracks and government buildings with impunity.

The raid on Port Nevermore inadvertently appeared to have struck a large chemical weapons stockpile located within the residential environs of the city resulting in mass casualties. It was however impossible to verify the chemical compounds involved or the casualties, except to note that they appeared to have been on a massive scale. This was further compounded by the unexplained destruction of several hospitals in the district after the raids had been concluded.

Later incidents were claimed by the SANE Joint Military Council (JMC) to be part of a cynical campaign by the Mingshi Emperor, utilising fanatical monks and Tegong agents from the Imperial Household, to target his own populace under the cover of SANE military actions. The Emperor's reasons for doing so have been the subject of much speculation, his increasingly doubtful sanity not withstanding. Yet it appears that, concurrent with the purges, the Emperor's paranoid mistrust of his own subjects meant that he considered himself to be as much at war with them as with the hostile coalition of foreign powers.

Invasion of the Tapferian Enclaves 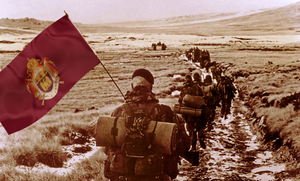 Following mediation by the High Realm of Stormark, representatives of the Joint Military Command of the Shirerithian, Alexandrian and Natopian Entente Forces and the Jingdaoese-Apollonian Union's Armed Forces gathered in Harvest Hall (Port Chloe) to sign an armistice agreement that terminated the war-fighting phase of the Sxiro-Jingdaoese Conflict on the basis of a status quo antebellum, albeit with a strict limit on the Jingdaoese garrison permissible on Penguin Island and the establishment of a demilitarised zone along the border between Jingdao and the Natopian Principality of Arboria.

The armistice, signed between 6477 and 6478 ASC, was subsequently condemned by the Xianfa Emperor who criticised the Diwang, Chiang Shun, for failing to procure an outright victory. Nonetheless, considering the disordered actions of the Mingshi Emperor during the opening phases of the war, survival was presented to the subject peoples of Jingdao as a victory of sorts that coincided closely with the 2,000th anniversary (ASC) of the first establishment of the Jing state.