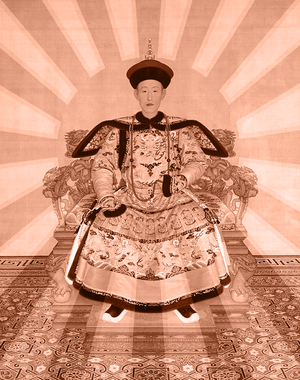 The Mingshi Emperor was a Jingdaoese Heavenly Light who, for the longest part of his reign lived on an oversea island, far away from the Apollonian mainland. After the death of His father, He departed the mainland and sought to achieve celestial wisdom through meditation. The officer Jung Shun came to an agreement with Him to end the political chaos of the Jingdaoese Spring, restore order, arrest or kill the traitorous Diwang Yin Ping and - to restore civil peace - to establish a more constitutional monarchy. Consequently, Jung Shun was promoted Diwang and received the power to achieve those reforms he deemed necessary.

While isolated from the outside world, the Heavenly Light was influenced by bad advisors (sources shift the blame on Shirerithian spies who were disguised as Ergonian beggars). Any reforms on the mainland had been non-existent as Jung Shun had fallen ill and many politicians fought against any kind of change. The Mingshi Emperor then suddenly, most likely influenced by the heavy tensions over the Northern Sea, declared war upon Shireroth and its allies in 6448 ASC.

Bombardments by Shirerithian forces were retaliated by - surprisingly - attacks on Jingdaoese civilians. Purges were ordered and the political establishment - for the first time in years - was worried about their own position. The government was in disarray: the USSO Allies started to condemn and abandon the Emperor's actions, while the Alexandrian invasion of the Tapferian enclaves meant the first occupation of Jingdaoese lands in 1,600 ASC Years.

The Shun Coup against Mingshi ended in a failure, with both the Emperor and His rebellious Diwang dead. The First Prince ascended to the Throne, claiming it under the name Xianfa Emperor.

The Emperor's devotedness to the Gods in his early reign inspired the monk Kai Ki to establish the Mingshivist Order. This move proved popular in that time, as a personal friend of the Emperor also established his own monastic order, inspired by the ideals and teachings of Mingshi: the Seishin Order, which would play an important role in the Xianxia Province.