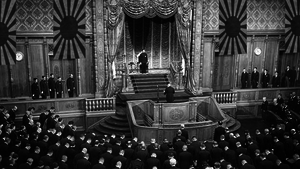 The Opening Ceremony in the National Diet. The Xianfa Emperor was the first Heavenly Light to officially speak to the elected and appointed members of the Imperial Yuan and Seanad.

The Heavenly Light is the title for the head of state of Jingdao. The Jingdaoese also refer to Her/Him as Emperor. Those who respectively want to refer to Him/Her, talk about She / He Who Is Jingdao.

Influenced by a renewed interest of the Shirerithians in their history and the introduction of a new, more precise and realistic calendar, the Jingdaoese attempted to rediscover their own roots. Scholars, most of Kildarian and Melangian descend were hired to finish the work and research the ancient scrolls. A heavy emphasis was placed on the Jingdaoese culture and history, and less on the nations' Apollonian / Kildarian heritage.

A constant factor is the existence of a few dynasties who ruled over the Empire, with the support of the Gods, until they fell from grace. Special attention was given to the importance of the Heavenly Mandate.

The mythical start of the Empire can be traced back to the Ying Emperor in 351 bAN, when the Jingdaoese started settling in the mountain region of central Cibola. The mountains and the few mountain passes which could be, with little effort, well protected, allowed the tribal chief Ying to unite the Lands of Jing (Lands of Purity). From the early start, the Jing People attempted to isolate themselves from the regions beyond the mountains. The belief that baishens and other evil forces were trying to destroy their homelands became stronger after a series of invasions in the First Century.

The Late Zuxiang Era saw a lot of unrest, weak emperors, the rise of local warlords and the demise of some important strategical mountain defences. A peasant revolt in the Third Century brought the Nongmin Emperor, a farmer who had successfully defended his home town against invaders and was appointed Prince of the Silver Rank, on the Throne. The Early Wangzi Era saw large scale attempts to re-unite the Jing peoples under one banner.

Nongmin and his descendants were largely successful and succeeded in establishing the first trade network with nations outside their own sphere of influence. The gold mines assured the empire of sufficient funds and the emperors carefully watched over those gold reserves, knowing that if they became depleted, the golden era of the country would soon end.

The Wangzi Era saw the rise and promotion of several 'Princes': local nobles and even merchants who received the title of Prince, in return for military or financial support. Military affairs were left in hands of those Princes, while the Court focused on religious and cultural development (the construction of temples and palaces put heavy pressure on the nations' treasury).

In the tenth century there was unrest among a large group of military officers. The trade routes were under immense pressure, as caravans were attacked once they left the safe borders of Jingdao. Calls for military expeditions were first denied (out of fear of angering surrounding tribes) by the Court. Eventually the Court allowed punitive expeditions, as the attacks became more frequent. A generation of soldiers and officers was raised and sent out. Some of those young officers were so successful that they received gifts (including land and the hand of the tribal chiefs' daughters to marry) for getting rid of the barbarians.

Shibing Guowang, a simple sergeant, married into a rich family from beyond the mountain range in 981 AN. At that time, an imperial rescript had forbidden "the marriage between a Pure Jing who seeks to defend the Empire's borders and riches and a Woman of Lower Heritage". The Court demanded Shibing fired from his position. The military first accepted the move, but when news reached Shibing, he killed the officer who had come to arrest him. In an inspirational speech he called for an end of the Empire's isolation and expressed the hope that his fellow soldiers would join him in his struggle to liberate the Empire of the tyrants that wanted to keep their people imprisoned between the mountains.

Many joined him as he marched towards the capital of Zijincheng. Resistance by the palace troops was futile, as by now Shibings' army encompassed battle hardened and healthy young soldiers, while the Emperor had hastily assembled an army of young recruits and old veteran guards who had barely seen any combat in their life. The palace was conquered and the Guowang Dynasty replaced the Wangzi Dynasty in 987 AN.

In 1526, the first Batavian attempts to colonise Cibola were made. Contact with Jingdao was made, and the Guowang emperors suffered a series of military defeats against the colonial troops. The military defeats eventually led to the end of the Guowang Dynasty and the rise of the Erasmii, who had held the religious authority over the country for a while already.

The Jingdaoese were made into a puppet kingdom within Batavian Cibola. The power of Jingdao, diminished by a dynasty which was unable to combat the new challenges that had arisen, was faced with total destruction. The last Guowang formally abdicated in favour of the Grand Duke of Batavian Cibola, Herman Civilis. The appointment of Herman (posthumously called Haman Emperor) in 1583 brought some new hope: his interest with Jingdaoese culture and religion brought him into contact with the influential Erasmii.

During a religious ceremony, Herman received a vision in which the goddess Germania advised him to appoint Mordechai ben Erasmus as his successor. The Erasmii Dynasty would ultimately lead the colonies to independence and establish Jingdao as a military power.

The Dynasty survived several crises, including the Jingdaoese Diaspora in 1602. The Ci Emperor (well known as Sisera) was forced to fight evil spirits, which resulted in the destruction of most of Jingdaoese Cibola. She Herself became a Catologian Goddess.

The Jingdaoese spread accross the world and eventually settled on the six isles in the Antican Sea, which had been conquered by king Rollin. It was, however, Rollin's successor, Jezza Rasmus, who claimed the Heavenly Throne. The return of Sisera from the Celestial Realm, as the Tianhou Emperor, brought back an even more powerful Heavenly Light.

It became commonly accepted in the Erasmii period that the Emperors were reincarnations of the Goddess Sisera or the two Prophets Mordechai or Simon (the two first Erasmii Emperors). The people saw the rule of the Heavenly Light as a blessing, even if He didn't rule directly but had the Grand Secretariat to act on His behalf.

To quote the common thought about government official policy: "Of course, all these stipulations in constitution and lesser laws, are only valid as long as Her Divine Majesty does not object to them". Even documents and laws like the Xianfa Constitution are therefore only able to exist as long as they are endorsed by the Emperor.

After the Destruction by the Obedience Machine in 1631 AN, the Dashi Emperor died and no successor came forward. A provisional government, headed by the Myxosean noble Takano Myksos, announced the (temporary) end of the Heavenly Mandate. Instead, after some debate, a member of the Erasmus Dynasty was appointed as Emperor of the Jingdaoese Empire. It's common belief that Jingdao without a Heavenly Light who's ordained by the Gods of Heaven, is doomed to fail. Therefore, the Heavenly Mandate became an even more indispensable part of the Jingdaoese political scene.

The imperial style of the Heavenly Lights is:

The (insert name here) Emperor, True Holder of the Heavenly Mandate, Bringer of Harmony, Descendant of Cato and Germania, Living Reincarnation of Sisera, Heavenly Light of the Holy Grand Jingdaoese Empire, Mater / Pater Familias of the Great Jing Dynasty, Caudillo of the Armed Forces of the Empire, Preserver of Aracigrad, King / Queen of the Batavians, Dutch(ess) of Kildare, Prince(ss) of Aryasht, Lord Protector of the River Warriors.

The Imperial Family was made up of the Emperor and His / Her spouse as the primary consort and Mother / Father of the Nation. In addition, the Emperor typically had several other consorts and concubines, ranked by importance into a harem, in which the spouse was supreme. Imperial convention dictated that at any given time there should be one Huang Hou (the Imperial Spouse), one Huang Guifei (the Imperial Noble Consort), two Guifei (Noble Consorts), four fei (Consorts) and six pin (Imperial Concubines), plus an unlimited number of other consorts and concubines.

Although the Emperor had the highest status by law, by tradition and precedent the mother of the Emperor, the Empress Dowager, usually received the greatest respect in the palace when it came to household affairs and was the decision maker in most family affairs. At times, especially when a young emperor was on the throne, she was the de facto ruler. The Emperor's children, the princes and princesses, were often referred to by their order of birth, e.g., Eldest Prince, Second Prince, Third Prince, etc. The princes were often given titles of peerage once they reached adulthood. The Emperor's brothers and uncles served in court by law, and held equal status with other court officials. The Emperor was always elevated above all others despite any chronological or generational superiority.

Not all Head of States were Emperor. Those receive no number.

The Dynasty of Princes.