The Kuominliantang (abbreviated to KLT and often translated to as National Union Party) was a major political party in Jingdao. Just like its predecessor, the National-Centrist Party, it had a heavy focus on protecting the Imperial Monarchy and Military as the pillars of Jingdaoese society. Following the 1659 AN decree by the Chidao Emperor to abolish democracy in Jingdao, the Kuominliantang was dissolved. Unlike the Nokarodo Faction, notable members of the Kuominliantang were able to remain active in Daocheng politics, usually in the Guanchang faction. 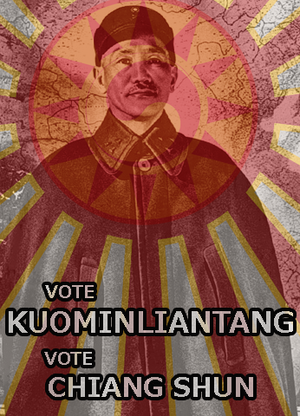 Poster of the KLT April 2017 campaign.

The following persons were chairman of the KLT:

Seats in the Diet

While the members of the Seanad are not elected, most of them are affiliated with a party.

The Kuominliantang participated in the elections for the Imperial Yuan three times, before the Yuan was abolished following the adoption of the Chidao Constitution.