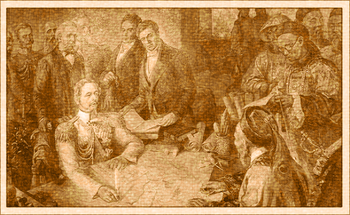 A rare insight in the Private Council.

From the shadows the Private Council, or Sifang Suweiai, governed Jingdao with an iron fist and influenced the Grand Secretariat in its decisions. Since the Sheng Restoration its role initially diminished, but this changed with the ascension of the Chidao Emperor to the Throne. Nonetheless, with the Heavenly Light often restricted to His palace complex and only accessible through His Stewards, its influence on state policies increased as they acted as His listening ear into the world.

While having regained some of its power under the Chidao Emperor, the centralisation of power into the hands of the Emperor himself, kept the council from becoming as influential as it once was. Its existence and influence is heavily contested by other organisations and groups, including the Imperial Household, who each seek to stop another of gaining too much power at Court.