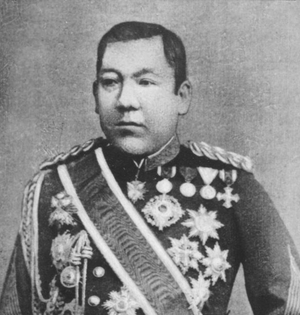 Yoshi Iwao, Field Marshal of the Imperial Jingdaoese Army since 1697 AN.

Yoshi Iwao (1654 AN - ...) was a military officer in the Imperial Jingdaoese Army after his graduation from the Imperial Kadetten in 1672 AN. He promoted in rank and eventually replaced Tzao Yao as Field Marshal in 1697 AN. His assumption of the rank of Field Marshal (and with this head of the Gunbatsu Clique) was criticised as his promotion was left unconfirmed by the Heavenly Court during the Post-Chidao Troubles. Confirmation (grudgingly) followed in 1699 AN, as the Xinshi Emperor required Iwao to have a sufficiently strong standing within the military to represent the Army and Gunbatsu Clique during peace negotiations in Xiacheng.

Born during the War of Lost Brothers during an air bombardment of the city of Yuanbeicheng, Jingdao. His parents, both of Jingdaoese descent, were simple peddlers who travelled across war camps to earn their wages.

He eventually was discovered by a subordinate of Field Marshal Tzao Yao, who eventually would take him in as protégé when Iwao was 12 years old. With his aid, Iwao joined the prestigious Imperial Kadetten.

Yoshi was known for being able to speak several languages and was allowed to travel across the Empire, as military attaché. In this position, he visited Passio-Corum, Batavia and Ralgon. He had a series of affairs, which more often than not made it impossible for him to stay in one place.

Allegedly, he even travelled to Shirekeep, were he passed his free time in its many pubs and enjoyed the company of less than honourable ladies of the night. Narrowly escaping imprisonment after being discovered, he fled Shireroth's capital and returned home in 1691 AN.

His insights and connections made him a rising star within the Armed Forces and a confidant of the most powerful military man of the Empire. With the death of his mentor in 1697 AN, he lost no time and proclaimed himself the leading officer of the Gunbatsu Clique. Well aware of his lacking prestige, he used his personal connection with the deceased Field Marshal. Secret pleas for confirmation of his position to the Heavenly Court (and half-hearted assurances of his loyalty) were only answered in 1699 AN, when the Xinshi Emperor needed a strong representative to re-unite the fractured armed forces and war lords.