The Post-Chidao Troubles refers to a period in Jingdaoese history after the ascension of the Chidao Emperor to godhood (despite chidaoist claims that He already held power over other gods in His physical body). Prior to the Heavenly Light's perceived death, dozens of Chidaoist cults and movements had spread across the Empire. Those rivalled the official teachings of Tianchaodao, which recognised the Heavenly Light as mediator, but not necessarily as a god. Many of those branches, like Eschatological Chidaoism, predicted the end times, while other - more rational voices - were concerned about the existence of the Great Jing Dynasty itself.

Rumours about the Emperor's ascension to Heaven and His takeover of total power from all other gods began to spread in 1695 AN, when He disappeared while attending a religious ceremony at the Heavenly Palace at Daocheng. It marked the end of what was perceived as one of the most stable and prosperous eras of the Jingdaoese Empire.

The conflict in the Dalmacijan theatre was known in Benacian and Humanist historiography as the First Kildarian Liberation War or - among Apollonian scholars as Second Benacian War for Kildarian Conquest, in reference to its earlier subjugation by Kaiser Gaelen I around 1451 AN. 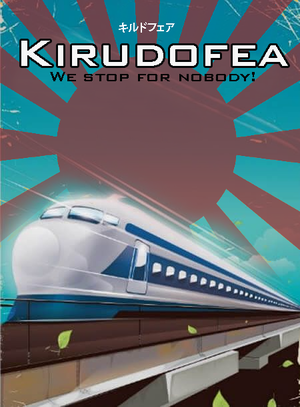 Kirudofea, the national railway service of Jingdao, was modernised and its lines expanded during the Chidaoist era to connect with the periphery of the Empire.

During the reign of the Chidao Emperor, Jingdao saw a period of unprecedented welfare. While the early part of his reign was dominated by the Old Guard who had played an important role during the War of Lost Brothers, the horrors of the war and the meagre victories had silenced most war hawks for the time being. Newly acquired land, taken from the Florians, finally connected Chongchacheng (known as Fosavlos) with mainland Jingdao, reinforced pride in the Empire and its Heavenly Light.

The Old Guard successfully stirred public opinion in favour of its policies, and - most importantly - away from ethnic differences. Succeeding where the Meiyo Emperor had failed, it stabilised the rule of the young emperor. The democratic institutions, which had been temporarily revived were incapable of handling urgent matters and was eventually silenced with a pen stroke from the Heavenly Court.

While growing up, the Emperor surprised friend and foe by side-lining his most important ministers one by one, and eventually taking court and government matters in His own hand. Policies to improve the life of the Empire's citizens proceeded, while integration of culture groups in a larger Jingdaoese identity was heavily focused on.

In the 1670's and 1680's the nation experienced huge economic growth - with an increase in manufacturing, housing construction, large infrastructure projects and the expansion of social services. Civil liberties, while still heavily monitored by the Tegong, were relaxed and projects to open the country to foreigners were well underway. The creation of the Gangdiguo Special Economic Zone and Treaty Ports fuelled the economic expansion.

The peace, combined with a sharp decrease of famines, increase in living standard and population boom, led many to believe that the Chidao Emperor was a god among His people. Chidaoism directly challenged the principle of Tianchaodao that the Heavenly Light acted as a mediator.

Consolidation of the Young Guard

The 1690 recession marked the end of an era of economical growth. With Jingdaoese markets heavily beaten up, reforms and fresh new blood were introduced to replace the stagnant officials, both in and outside the government. Both Navy and Armed Forces saw themselves under new, more modern leadership. This, however, did not diminish the usual rivalry between the two forces.

The newly established provincial assemblies, established to receive the blame for any failures of the central government, became hotbeds of political discussions. Especially in Bangou, where a large group of vocal Dalmacijans and Kildari gathered, and Xianbei, which had been traditionally the home of leftist movements, tensions between the ruling class and its subjects rose. 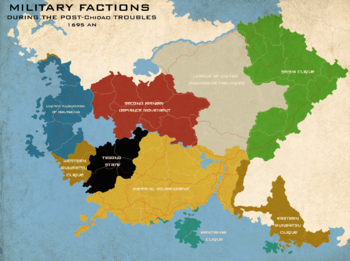 The several factions in 1695 AN. Keep in mind those borders are the factions at their largest extension. In most cases their influence is limited to the highways, railways and cities.

Disappearance of the Light (XII.1695 AN) 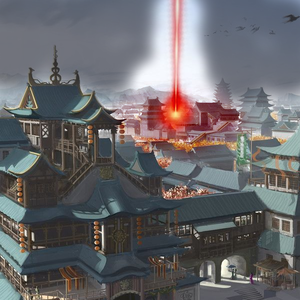 A red beam of light was seen on the seventh of the twelfth month.

Secession of the Provinces (XIII–XV.1695 AN) 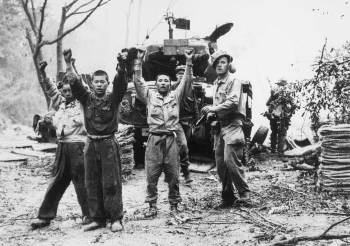 Three members of the Young Wandering Society, attached to the III Heavenly Corps, photographed shortly after their capture by the Talons of the Archon. Notation written on the back of the original photograph read: "Trio of Jing. Sold to the Penitents for rum and opium. Did not even wait for us to leave before they began the sacrifice to Mors. Heathens, the lot of them." 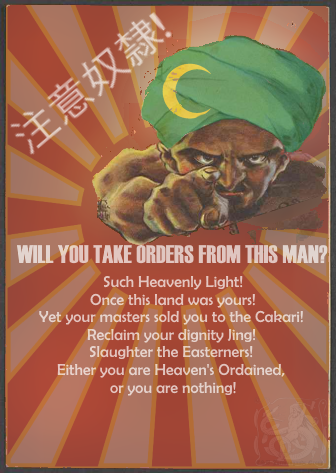 The Kildari warbands delighted in preparing propaganda leaflets to be scattered over Jing positions via mortar-launched explosive canisters. This example, dispersed over Jing lines prior to the Daocheng Offensive, could scarcely conceal its glee in pointing out the humiliation that the Jing would experience in submitting to the Çakaristani Sultan. 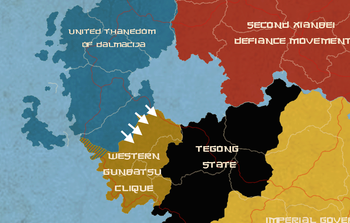 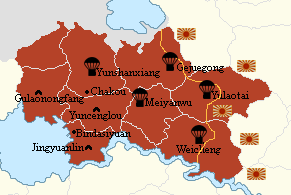 Simultaneous attacks by both special forces and airplanes are done near five major chokepoints. 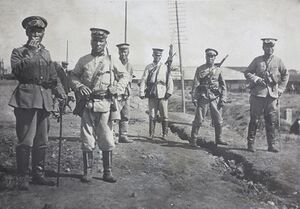 The Xianbei Revolutionary Volunteer Corps, made up of Jing volunteers living within Dalmacija joint either out of conviction for the revolutionary cause, or either simply to bring food on table. The latter group was heavily frustrated and conflicted by the excommunication of the Xinshi Emperor. 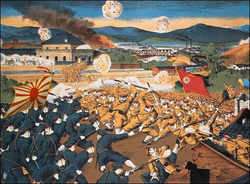 The Battle of Hongsejiamen was one of the most important battles in the final days of the civil war, when Jingdaoese troops clashed with the combined armies of both Xianbei and Dalmacija.

In summary: The failure of the Daocheng Offensive, over-extended supply lines, and the threat of a further massive offensive out of Xianbei province, obliged the Kildari forces to retire northwards. With the Jing in pursuit of the retiring forces, now exhausted and depleted after a long retreat punctuated by numerous rear-guard actions, it became increasingly difficult to consolidate new defensive positions without them being outflanked in the interim and left in danger of being cut-off or overrun. Eventually, with desertions, factionalism, and infighting becoming ever more rife, the inevitable was conceded and during 1700 AN arrangements were made for the evacuation to Arboria of those Kildari who did not wish, or were unable, to be reconciled to the new regime. Marius Gallo was amongst those evacuated, with many sources attributing to his desire to escape retribution and his sudden night-time flight from Port Nevermore the primary cause for the collapse of the defensive perimeter that the Talons of the Archon had established around the peninsular and the frontier with Arboria.