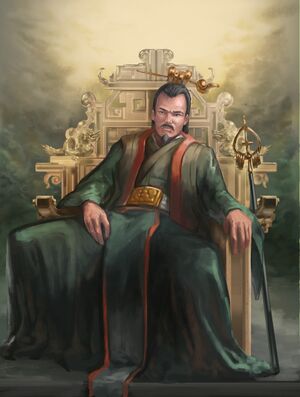 Taizong of Seishi, sitting on a trone, in Jingdaoese attire.

Taizong of Seishi (1667 AN), also known as Taizho, was born as youngest son of the Silver Camel Tribe. His tribe was a part of the larger Qyzylqaystani tribes and served the Heavenly Light in its eastward expansion. He played an important role during the Post-Chidao Troubles, as he claimed the Heavenly Throne for himself and established the Seishi Dynasty.

Youngest prince of the Tribe

Taizong was born as fourth child in the royal family of the Silver Camel Tribe. Neither his three older brothers, nor his father (who was ill), welcomed him amongst their midst. Only his mother, a princess of the Golden Sun Tribe, seemed to protect him against the grievances of his siblings. With a leader who was weakened by illness, the tribe saw its fair share of domestic troubles. With each of the brothers, despite their young age, striving for power, Taizong was more seen as a nuisance than a threat.

When Taizong was three years old, his oldest brother tried to kill him during horse practice. The animal went wild, almost throwing off the young boy. He successfully calmed down the horse, impressing the fellow tribesmen. He had already been the favourite of his mother and started to catch the eyes of some of the elders. This endangered his life, as he still lacked any real backing.

His oldest brother was imprisoned for his actions and found death in his tent a few days later.

To protect him against his fellow siblings, Taizong was sent to the capital of Daocheng as part of an exhenge system when he was seven years old, in 1674 AN. During his stay, he visited several western cities. He was both impressed and shocked to see how its elite governed the country. He began to compare the squabbling Army, Navy, bureaucrats and merchants with his brothers. They were in his eyes an unnecessary evil whom weakened the empire from within. His belief in strong leadership grew when he participated in an audience at the Imperial Guang Palace. Later he confirmed that he had felt inner peace and no disunity at that moment. Solely a desire of all who were present to serve the Court and Heavenly Throne.

The birth of Houdezaiwu in 1679 AN was celebrated among Taizong and his fellow tribesmen. Nonetheless, he became concerned over the state of the empire which had known peace for too long. He kept himself informed of the struggles of his tribe in the east against Green Barbarians, and noticed disinterest among those who travelled with him. The years of luxury had softened and corrupted their mind.

He started to train them, while looking for allies among those who resided in the capital. His romantic endeavours made him enough friends and enemies to keep him (and his closest friends) vigilant.

Life as leader of the Silver Camels

In 1685 AN he returned to his tribe. His brothers were soon sidelined and he became the leader of the tribe. He introduced Jingdaoese fashion and practices, while emphasizing the military traditions of the tribes. He modernised the weaponry and started to supply his tribesmen with weapons and military hardware which he smuggled from the west.

When Zhang San was forced to retire (which would most likely be followed by his execution or suicide), he organised a secret group to kidnap him. Taizong had, since his return home, understood that the Chidao Emperor would not live forever. He understood that only a strong leader could lead the empire and eventually unite the continent.

With Zhang San kidnapped, he hoped to use the former Diwang to legitimize his own regime.

Troubles began when in 1695 AN, the Heavenly Light disappeared ("ascended into Heaven"). While a successor stood ready, many were uncertain if she was up to the task. The empire started to break up in several factions: leftists hoped to establish a people's republic, the Dalmacijans hoped to restore a Kildarian nation, while the Army dreamed of a military dictatorship. Taizong revealed his plans during a tribal meeting and convinced the most important tribes to support him.

He was hailed as the new emperor of Jingdao: Taizong of the new Seishi Dynasty.