The City of Daocheng (稻城, Jingdaoese: Dàochéng; Sangunese: Inagi; "rice paddy city") is the capital city of the Jingdaoese Empire, and the nation's third most populous city (behind Xiacheng and Gangdiguo). It is part of the Dazijin Province and made up of several urban districts. The surrounding countryside, belonging to the province is often (wrongly) counted as a part of the City. The city is home to more than twelve million residents (census 1672 AN).

While the original town and a small summer residence has existed since 1458 AN, when the early Jierdai Dynasty ruled the lands, it has only been expanded and established as a capital during the reign of the Zettai Emperor who moved the capital to Daocheng in 1631 AN, after Epoli had been destroyed in a nuclear blast. It became the favourite residence of the Sheng Emperor, who occasionally travelled outside the city to hunt or pay tribute to the ancestral graves, which had been constructed in Zhijinlin. 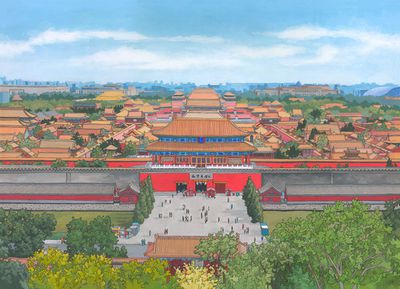 The Forbidden City is both the political, religious and cultural centre of the Great Jing Dynasty.

The city lies within the Imperial District (or Imperial City, as it's often called) and is the home to more than eight million residents. It's roughly divided into the Forbidden City, the Restricted City and the Outer City. Beyond the city walls, lay farmlands and suburbs. Ethnic origin and religion dictates where one can live.

The Forbidden City, also known as the Imperial Guang Palace, houses the family of the Heavenly Light and His most trusted bound servants. It's the political and cultural centre of the Realm and home to the Imperial Household. The Imperial Treasury, where the tribute is stored which the Emperors received through the ages, is located within those palace walls.

The Restricted City is good for around 2 million citizens and houses only pure Jing residents. This part of the city, while more closely located to the Imperial Palace, and much safer and with better upkeep than the Outer City, is in some areas nonetheless plagued by poverty and criminal activities. Anyone can enter the Restricted City through one of the Four Gates, where they are registered. When evening falls, the visitors of non-Jing descent need to leave. Those who fail, receive a heavy fine.

There are exceptions: those with an imperial permit are free to go and live within this city part. However, their numbers are limited, as these are mostly wealthier merchants and nobles of Kildarian or Apollantean descent. Nobles from all across the Empire often reside in a summer house in the Dasha District, located in the wealthier parts of the Restricted City.

Beyond the Four Gates lies the Outer City: home to the largest part of the city's population. Some of its districts became showcases of wealth of the local population which even rivalled the grandeur of the Forbidden City and Imperial Palace. Especially the Meiyo Emperor's policies (1657 - 1659 AN) introduced a new sense of pride among the richer commoners. While claiming that they were 'giving back their wealth to their fellow commoner' by investing in temples, parks and other ventures to gentrify the neighbourhoods, it was also a showcase of their own power towards the political classes.

As the city combines both Jingdaoese and Kildarian architecture, it makes a fine example of a modern Jingdaoese city. It serves as both a political, economical and cultural powerhouse, which serves to display the power of the Great Jing Dynasty. The several marvelous monuments and palaces showcase examples of the finest art, treasures and relics from both the time that the Jingdaoese ruled the nation, as Kildarian and Apollonian eras. One of the main tourist attractions is the Jingdaoese Historic Museum. This museum showcases artifacts that were gathered during the entire Jingdaoese history, from the Cibolan era to the present day. Notable exhibitions are a Tee al that was presented by the Garden of Kalgachia to the Chidao Emperor and the cockpit of the Feixing Empress's jet airplane the Sisera One. 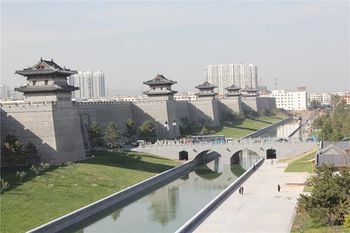 The city wall of the Restricted City and the Jade Gate of Calamity. In the background one can see the skyline of the Outer City.

While laying in the centre of the Empire, Daocheng possesses a series of fortifications and walls, which have to serve as a last line of defence during war time. These walls divide both the city districts and the gates serve as checkpoints for those who want to enter or leave. As life and work within the capital all happen in the people's direct neighbourhood, many of the citizens never - or almost never - leave the city district they were born in.

The Forbidden City has two gates: the Golden Gate of Tranquility and the Golden Gate of Harmony. The Restricted City can be accessed through four gates: the West Glorious Gate, East Glorious Gate, the Jade Gate of Calamity and the Jade Gate of Splendour. The surrounding Outer City has a total of eight gates, which do not serve as checkpoint. Those visiting the Outer City have the liberty to move between those city districts and the surrounding countryside.

The outer city walls, which encompass the actual city (including the Outer City) are part of a defensive network, which already start at the border of the province. This huge endeavour which is a mix of fortresses, impressive walls and mountain ranges is called the Great Wall of Dazijin. Several Emperors invested funds in its construction and upkeep, as it has a prestigious value. 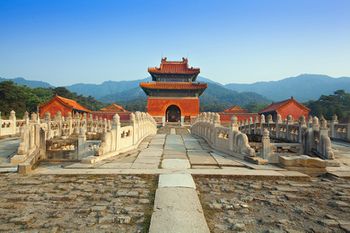 The Northern Jierdai Tomb. One of the tombs which was built, and later reconstructed in Jingdaoese style, in the Jierdai Dynasty (1451 - 1623 AN).

North of the capital city lies the Zijinlin District, one of the four great national parks of the Jingdaoese Empire, and due to its location close to the capital the most popular with tourists. Most of the park comprising of dense forests is inaccessible to commoners, but some areas in the south are open for tourism.

In this area there are campsites for tents, holiday caravans are illegal across the empire. One of the most prestigious cemeteries of the empire is also located in the southern part of the park. Well known are the burial tombs of the Jingdaoese patriarchy, renowned for their fine ornaments out of marble, gold and precious stones. In shrines dedicated to the ancestors, visitors pray to the living Heavenly Light that He may protect their relatives in the afterlife.

The region traditionally served as burial place for the rulers during the later Youya Dynasty (987 - 1451 AN) and Jierdai Dynasty (1451 - 1623 AN). When the Great Jing Dynasty came into power, massive investments were made to restore some of the tombs, while - when necessary - reconstruct them in a more Jingdaoese style. While some foreign scholars criticised this move as an attempt to falsify history, it served as a strong example of continuity.

With the growth of the Imperial City in the early 17th century, the need arose to coordinate the actions of the local administration of each of the districts. As the Imperial Household focused on national and foreign politics, it appointed an Imperial Magistrate. This person became responsible for all affairs concerning the capital. In contrast with other offices in large cities, the Magistrate answers directly to the Emperor and not to the local Vice-Roy. While the Magistrate has authority over the daily workings and administration of the city, authority over the monitoring of traffic and other security issues are in hands of the Commander of the Eight Gates.

While the Great Jing Empire occasionally allows foreigners to enter the Realm, its not an habit of allowing them to settle within one of its cities. However, Emperors have made an exception to inhabitants of nations which are perceived as friends and received the status of Xing from the Grand Secretariat. Those citizens, while limited in their movement (except if sufficient paperwork and background checks have been finished), are allowed to live in the Legation Quarters in the Outer City.

The Bassarids - mainly those who had backed the administration with huge funds - were the first who, under Meiyo Emperor, received permission to construct their own city quarter, rather than being forced to live spread throughout the capital. This was followed by a Krasnocorian Legation Quarter, which was smaller in size.

Zijin is divided into three districts and several Quarters. Those are all within the Great Wall: