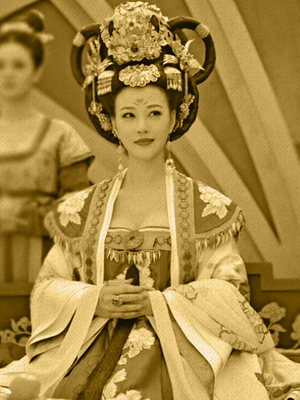 Princess Yuling before Her ascension on the Throne.

The Meiyo Emperor (well known under the name Princess Yuling) was the oldest daughter of the Xianfa Emperor and younger sister of the Hai Emperor. She was born three years before the death of her honoured father and grew up to be known as the Pearl of Women thanks to her beauty. She ignored marriage proposals and convinced her brother to let her move to the Jade Palace, which was constructed on her orders.

She showed herself political useful when taking over the Badao Party, while leading them to victory in the 1650 Yuan Elections. Her successes made her shine in politics: because of her direct link to the Heavenly Light, she was both respected and feared among her fellow politicians. This made any political attacks on her person difficult.

The War of Lost Brothers, her unwavering support to the war effort and expansion of the power base of the Shanghu eventually made her into a target in the aftermath of the war. When her brother died, she took over. Willing to pursue a liberal program, she called for elections. The 1657 Yuan Elections ended up in a political failure and deadlock between a lot of different factions. As governing the country had become difficult and knowledge of the existence of a young son to the former Hai Emperor (well hidden in the palace) became known, she was pressed to step down in favour of the rightful heir.

Unwilling to plunge the nation into a civil war, she allowed for the military, bureaucracy and Navy to take charge of politics. As last act, she dissolved the Imperial Yuan, while granting all state power to the new Emperor: the Chidao Emperor.

After her removal from the Heavenly Throne, Yuling focused on supporting her nephew with advice. To counter the influence of the politicians on her nephew, she sponsored several lobby groups to hinder her opponents from appointing weak and bad teachers. In her free time, she remained active in the company she established as a young girl (the Tranquil Jade Tea Society).