The Chidao Emperor is the 91st Heavenly Light of the Jingdaoese Empire. He was born in 1657 AN as son of the Hai Emperor, who had died by a stray bullet during a conflict between Imperial Whites and a group of young officers who wanted to "free the Emperor" from the anti-war and democratic influences. At the moment of the death of His father, Chidao was not yet born, and - for a while longer - the existence of the child remained unknown and uncertain. Because of his hardheaded focus on absolutism and dedication to weed out any remaining strains of democracy in the Jingdaoese Empire, and the draconian measures he would take to gain his goals, he has gained the nickname Mabutingti, meaning the unrelenting, both from his foes as his friends. The philosophy championed by the Chidao Emperor is known as Jingbuist Absolutism and can be seen as a combination of traditional Jingbuism and the Tianchaodao. In comparison to his recent predecessors, the Chidao Emperor is seen as a much stronger emperor on par with the early emperors such as the Mengjiang Emperor and the Ci Emperor, or even greater. In the late 1670's the idea arose that the emperor was either Cato himself, or perhaps even something greater. This idea is known as Chidaoism. The Chidao Emperor is considered to be a Great Light.

Very little is known about the private life of the emperor. In 1679 he became father for the first time, announcing the birth of a daughter. It was not made public until late in 1679 that Song Chidao, who acted as a junior steward at the Daocheng Palace at the time, was the mother of the heir to the throne. The name of his daughter was a mystery until 1685, when it was made public that the emperor had four children:

According to a publication by the Tegong, citizens have never in the history of the empire been more enthusiastic about their emperor than during the reign of the Chidao Emperor. This information was derived from the praise given to the emperor during the haofuxi. 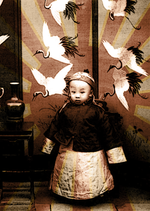 After the Hai Emperor's sister, princess Yuling, took the Throne, court physicians confirmed that a young baby son had been born in the Inner Palace. The mother, the favourite concubine of the deceased Emperor, was ordered to remain silent about the newborn child. For a while, the position of the child remained uncertain: for the Meiyo Emperor he could have been a threat to her plans to unite the Jingdaoese with Passio-Corum. Still undecided, the child was kept safely behind the palace walls, while He was educated in the basics, like learning the Jingdaoese and Kildarian languages. The child had a love for military equipment, but very little interest in warfare. He would ask for impromptu military parades in the gardens of the palace, or would visit the dry docks of the Tianchao Haijun. The state of the navy worried him, which inspired him to order the Tianchao Haijun Modernisation of 1678 when he was older.

In 1659 AN, when Chidao reached his second birthday, the Empire's political situation was rapidly spinning out of control. The child's aunt had gambled that new elections after the war would have returned peace. The 1657 Yuan elections had however proven disastrous for anyone who wanted to keep stability, and had forced her to keep power in her own hands. This act, deemed hypocritical among a vocal group of pro-democratic politicians, had made her immensely unpopular. This combined with lasting problems concerning the thousands of unemployed soldiers returning from the front, led to a depressed and frustrated monarch.

Pressured by a growing faction of loyalists in both the Army as Navy and court bureaucrats, she abdicated in favour of the young Chidao prince. Endorsed by the Magister of the Church, the boy was hailed to be blessed by the Gods.

The ascension of the child emperor 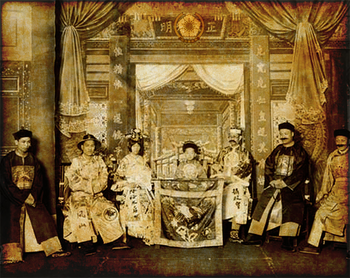 1659 was a year of many changes to the life of the young prince. For the first time in his life He was taken from the Inner Palace to the Outer Palace, where He met with a number of important court officials. There He met His imperial cousin and vassal, the Hoshasei Emperor of the Empire of Hondon. The Army sent the legendary Tzao Yao, who was praised as a genius military hero who had single-handedly defeated the Shirerithian hordes and turned the tide on both the Florian front and - later - on the Dalmacijan front. The Navy was represented by First Admiral Liang Dumyan, who had replaced the former Admiral after several naval failures during the war effort and the Grand Secretariat was represented by the Diwang, Zhang San.

The lack of any representatives of the Imperial Yuan was a sign of what had to come. While both the Bureaucrats, Navy and Army had been natural opponents towards each other, they had seemingly put their differences aside. The ascension to the Throne happened rather quickly, with several servants taking the former Empress aside to one of the backrooms, while the other officials remained with the young emperor.

A decree in which the Yuan was disbanded and total power was formally returned to the Imperial Court was publicised with imperial support only an hour later. An immediate power struggle was prevented thanks to the intervention of Diwang Zhang San, whose expertise in politics was seen as indispensable in strengthening the Throne.

Politics of the Chidao Emperor

The Chidao Emperor rose to power at a time when there were talks of integrating the Jingdaoese and Bassarid Empire. The emperor did not agree with these proposals and stopped the negotiations on this subject. In 1659 he issued a decree which abolished the democracy and made Jingdao an absolute monarchy again. While the Chidao Emperor is a strict absolutist, compared to other absolutist Heavenly Lights of the past such as Sisera, the Chidao Emperor is not known to possess sadistic tendencies.

While at first the Chidao Emperor proposed to more tightly integrate the colonies, during his reign he would give up almost all of them in order to expand on the Apollonian continent. In 1660 most of South Island was given up to expand on the eastern border of the Jingdaoese mainland. In 1661 the Chidao Emperor annexed the vassal state of Hondon after a brief insurgency in which the Hondonese Hoshashei Emperor was abducted. Later that year Jingdao and Floria offered a claim to the MCS in which Floria gave up a strip of land in the south of their mainland, in return they would receive the Jingdaoese part of South Island. With this strip of land a corridor was gained which enabled the Jingdaoese to build a highway from Xinrechen to Hongang. In 1662 the Chidao Emperor gave up almost all remaining overseas territories, except Batavia and the Six Islands, in order to free resources to annex a large swath of the green, again on the eastern border. In 1663 he then ratified a treaty between Jingdao and the emerging Batavian states in which Jingdao will give up the Batavian lands as well. After the deal was finalized, the Jingdaoese Empire only held land on the Apollonian continent, and two small overseas islands.

After some incidents on the Jingdaoese-Alriggian border, and the subsequent declaration of war by Alrig, the Chidao Emperor reluctantly went to war with his favourite neighbour. Despite the fact that Jingdao's military forces greatly outnumbered those of Alrig, he did not order his forces to overrun them. As Alrig did not repent its hostility, the Chidao Emperor saw no other option than to annex the land. Like other favourite peoples of the Chidao Emperor, such as the Rivorians and the Qyzylqaystani, he allowed the Alriggians the privilege of keeping their own culture.

The Emperor showed himself a capable leader. Under the guidance of his Diwang, he was taught how to govern his country and think for himself. The group of nobles and officials who had placed him on the Throne rapidly lost control over the ruler's politics. This, however, didn't mean that they were pushed aside. He lacked the eagerness to enforce cruel punishments when this was unnecessary and disregarded the potential risk of keeping his powerful, but capable, retainers. By breaking with what had more or less become a tradition at the Heavenly Court, the Heavenly Light was praised by those who had feared a new era of reprisals after the disbandment of the Imperial Yuan.

The Chidao Emperor governed his impressive realm from within the Heavenly Palace at Zhongjing and de facto made himself a prisoner. Safely from within the walls, he gained the reputation of an almost god-like father figure who acted with the best intentions. Having rooted out the last remnants of a corrupt democratic system, his governors and representatives in the provinces were seen with high regard. The Empire remained strong, prosperous and peaceful throughout most of his rule, with exception of minor border conflicts. This led to the rise of Chidaoism in the 1670's. The Hao-Cong Project was first started in the territory of the River Warriors and had the objective of giving all Rivorians a personal reason to love and obey the emperor, similar projects were employed with the other minorities within the empire, the Alriggians and the Qyzylqaystani and to a lesser degree the general population.

The Chidao Emperor, True Holder of the Heavenly Mandate, Bringer of Harmony, Descendant of Cato and Germania, Living Reincarnation of Sisera, Heavenly Light of the Holy Grand Jingdaoese Empire, Pater Familias of the Great Jing Dynasty, Caudillo of the Armed Forces of the Empire, Preserver of Aracigrad, Dutch of Kildare, Prince of Aryasht, Lord Protector of the River Warriors.