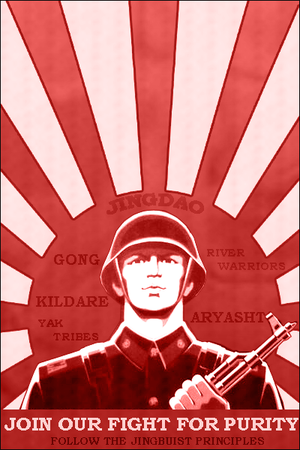 The illiterate masses in the impure countries are often more easily impressed by a poster than reading a manifest.

Jingbuism is the main ideology of Jingdao. It was for the first time mentioned in a thesis in the Ecclesiastical Academy of Pentapolis in 1592 AN (September 10th 2012) and has survived through the years. It served as a red guideline of Jingdaoese political ideas, until it was replaced by Jingbuist Absolutism.

The love for your Motherland or Fatherland is important. By serving a government which is loyal to the Heavenly Light and Her Principles, one will purify his own soul. While it seems irrational for Jingdaoese, there are still people who want to live in a sovereign nation because of nostalgic feelings. Without doubt this are thoughts which were whispered to them by evil Baishens (spirits). Don't be afraid: the Heavenly Light, in Her willingness to make the transition easier, allows nations to remain under a seperate government.

To protect the Jingdaoese State, and those nations in which the people's eyes will - without doubt - be opened and will join the world revolution, a strong army and navy is important. From when the people are young they must be prepared to defend themselves against the enemies of the Heavenly Revolution.

To achieve this, children must be send to youth organisation which focus on their training. This will be followed by serious training during their adolescence. Children who are physically unable to serve in the armed forces will be used for other purposes that will eventually benefit the Nation. Those who don't volunteer will be seen as mentally ill and re-educated to avoid the spread of the disease.

Cato's word is law and as Sisera is the daughter of Cato and bringer of harmony, She must be honoured in any way possible. Through Her flows the energy from the Gods and through Her the People will reach unknown heights in their development. Atheists must be rehabilitated, as their lack of belief in Gods, is a lack of respect towards Them. Once they are freed from their delusions, they will once more be a valuable asset for society.

The Nation and its People must, at all times, stand behind their comrades at the frontline. Through extensive investments in the military, Jingdao - and any nation following our Principles - will stay free from oppression. The industry must serve the Jingdaoese People!

Knowledge is power! Everywhere on Micras the masses are oppressed. Some live in so-called democracies which poison the minds of their citizens by granting them a feeling of satisfaction, others live under the hands of unknowing dictators and kings who have not even heard of the True Path of Purity. Educating our children is therefore the only way to avoid that they will ever be blinded by propaganda or empty promises of the enemy.