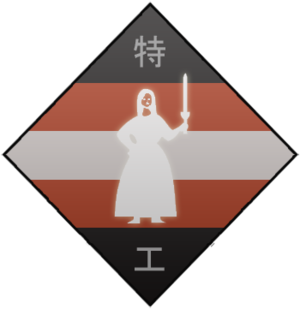 The Tègōng is a paramilitary organisation in Jingdao which acts as the primary agency for intelligence and obedience. The organisation employs approximately 100,000 men and women. The Tègōng only answers to the Heavenly Light, not even always to a regular emperor, and has a license to kill even government officials such as Imperial Chancellors and generals. Most employees of the Tègōng were born into it and are part of families that have served the Heavenly Lights since the days of Sisera the Ci Empress. For this reason, the Tègōng is also known as the Siseranist Tègōng. In Jingdao itself, the Tegong is most notable for the yearly haofuxi.

Originally, the Tegong served side by side with the Imperial Whites. Early records show that their members were especially skilled at martial arts. They remained in or near the capital, as they acted as a shield against the enemies of the Heavenly Light.

From the 1620's till the 1700's, the service expanded into a secret police, which arrested rebellious types who were seen as a threat to the the Great Jing Dynasty. As they acted under the direct command of the Heavenly Light, there actions were not always in line with government policies.

Eventually, throughout the years, its influence grew, and its Tegong Banner Armies of the Five Banners became increasingly powerful and influential during power struggles. In 1700 AN, due to budget constraints and the necessity of focusing on its initial security tasks, the decision was made to disband the armed forces of the Tegong. 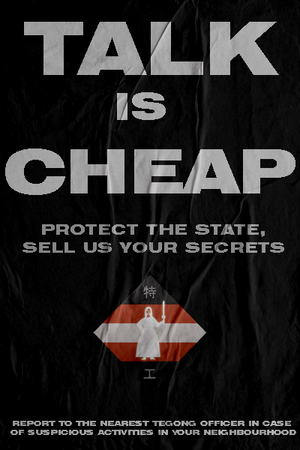 Talk is cheap. Every citizen has the duty to report suspicious activities, even if those are coming from yourself.

Throughout the years, the Tegong transformed not only in the last bastion of protection of the Heavenly Light, but it served as protection against enemies of the state. Especially since the liberation of the Apollonian continent from Shirerithian influences, the organisation served in eradicating those who formed a threat to the Great Jing and Jingdaoese culture.

Extensive campaigns, brainwashing and the establishment of re-education camps, also known as REST, were the domain of the Tegong. Its use relaxed during the reign of the Chidao Emperor, but under the administration of Hon Ben Erasmus there was a sharp increase in surveillances and crackdowns.

Li Suyi, Marshall of the Tegong in the 1700's, was seen as one of the more extreme members of the administration, and pushed for a transformation of the service into a cultural thought police. Its activities as a military component decreased, as an increasing share of the budget went into re-establishing the secret police throughout the States it had been forced to abandon during the Post-Chidao Troubles.

Qu 152 is a former nuclear missile base, currently only equipped with conventional weaponry, that houses intercontinental ballistic missiles that targets locations on Tapfer, Mar Sara and Eastern Cibola.

Qu 152 is a signal intelligence bases that houses antennas that collects communication data on Tapfer and Mar Sara.

Qu 154 is a former nuclear missile base that houses intercontinental ballistic missiles that targets locations on Benacia and Northern Island.

Qu 152 is a signal intelligence bases that houses antennas that collects communication data on Benacia.

Qu 157 was a large area on Apollonia where Jingdao tested its nuclear arsenal. Both atmospheric and underground tests were executed. To this day, the area has higher radiation levels than other regions in Jingdao. Qu 157 is formally disbanded.

The Obedience Machine which destroyed most of Jingdao in 1631 AN was built by the Tègōng. It has not been reloaded since its previous activation but remains in active service.