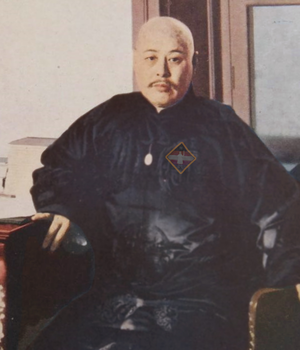 Li Suyi on his fortieth birthday at Daocheng, where he was honoured by the Chidao Emperor for his service.

Li Suyi (1650 AN - ...) was a Jingdaoese Tegong officer who was eventually promoted to the position of Marshall in 1691 AN. He became the leading figure of the organisation during the era of the Chidao Emperor and was known to rule his organisation with an iron hand. In contrast to his predecessors, he was known to travel a lot to personally investigate cases and the organisation's branches. As his visits brought him all over the Empire and his function brought him in direct contact with the Heavenly Light, he acted as his ears and eyes. His later career would see him involved in certain controversial aspects of the Decade of Inharmonious Regrets and the Fortuitous Immolation.

Stance during the Troubles

When the Chidao Emperor ascended in 1695 AN and the post-Chidao Troubles began, Li was on an inspection in Qaoshan Province. Afraid that this sudden disappearance would destroy the status quo, he called upon the Tegong's several branches to assemble in the province. The port town of Genkaku, which was located at Lake Christoph and granted access to a large part of the Realm, became his new headquarters.

Due to the uncertain situation, Li was unwilling to directly support Houdezaiwu, despite the Tegong's immediate subordination to the Heavenly Throne. Li started envisioning a Jingdao which was liberated from impurity and began acting more and more as a local warlord, strengthening his power base. He threatened other factions that he would use the nuclear arsenal if they would wage full scale war, which limited the fighting and bloodshed.

While acting as mediator, Liu himself knew well that most of his nuclear stockpile was outdated and could not function as deterrence forever. Only a few of his closest friends were aware of his plans to prepare his newly established state for full scale war.

Having grown up to see the Heavenly Light as a god, he followed the Chidao Emperor as a shadow. Wherever he came, rebellions and subversive thoughts were squalled. His extremist tendencies, while useful in certain cases, were discouraged by the Emperor himself. Without His guiding hand, Liu's subordinates started to notice increasing rhetoric about cleansing Micras from impurity. Maps of the continent showed burned holes on places known for their lack of purity.

In spite of being ostensibly on the side of the victors in the Post-Chidao Troubles, Li Suyi had made many enemies at court during the civil war, largely on account of his early failure to offer complete and unconditional fealty to the Heavenly Light, and his ominous reservations regarding the mooted union with Cakaristan. At the Conference of Apollo his vote for the appointment of Akbar Çakar, the Sultan of Çakaristan, as Emperor was a grudging one made out of consideration for the need of unity, and made only after his appeals to pour down atomic fire upon the rebels and their sponsors had been summarily rejected. This left him vulnerable to the intrigue that was organised against him by his lieutenant Shi Pupei and the eunuch courtiers inside the Forbidden Palace of Daocheng. As his worst fears regarding the Great Apollonian Empire falling to the cultural and political hegemony of the Cakari were increasingly realised, Li Suyi found himself side-lined and eventually obliged to accept an Imperial Rescript that had acknowledged his voluntary retirement. It was a stinging insult and Li Suyi would later remark that "It would have been preferable had I been permitted to drink the red tea of heavenly wrath, than to endure living with the shame of being dismissed from the light of heaven". In spite of being granted the honour of a pavilion and tea house in the outer wards of the Forbidden Palace, Li Suyi had instead resolved upon the distance of exile as the best salve for grief he felt at the betrayal he felt by Shi Pupei and the dynasty whom he had been raised from birth to serve unthinkingly. Not wishing to be wholly sullied by exposure to corrupted barbarians, he had elected to spend his self-imposed exile amongst the Jing resident in the port of Tiegang, the capital of the International Mandate.

It was a fortuitous decision as it spared him the fate of many associated with the old regime during the Second Kildarian Revolution and also fortuitously left him in helpful proximity to the Jingdaoese Mandate Regiment, one of the few formations of the Imperial Armed Forces to remain uncorrupted by the regretful period of history that would unfurl between 1700 AN and 1707 AN. It was during this period of enforced contemplation that Li Suyi first began to read locally available translations of the core texts of the Humanist movement, finding to his surprise much there that could be of use when it came to the purification of his ancestral homeland. Of course the Humanists would all have to die a dog's death eventually - how could they not, for they were not Jing - but for the restoration of obedience amongst the lesser races here was an ideology unmatched. Once all heresy and individuality had been burnt away from the minds of the servile, their hearts would once more be open to receiving the heavenly wisdom of the true Tianchaodao.

Li Suyi enjoyed a certain level of prestige amongst the purist officers of the Mandate regiment, hosting them for evenings of rice wine toasts to the memory of the Chidao Emperor and games of Go that would last into the early hours. The emeritus marshal during this time became known for his fiery and fervent monologues which were said to kindle and further stoke the patriotic ardour of those who were privileged to have heard them.

When he learnt of the death of the Tobu Emperor in 1704 AN, Li Suyi was said to have paused from sipping his tea to remark that it was a pity. Later that day he would pen a poem on the tendency of the discordant and the inharmonious to destroy themselves that was much admired for the classical brushwork of its calligraphy. If Li Suyi had thought that the fortuitous removal of the foreign interloper by a zealous patriot would set in motion the restoration of the Tianchaodao he was to be sorely disappointed, as his hated rival and nemesis Shi Pupei would respond not by restoring the Xinshi Emperor to her rightful dominion, but instead to commence a seditious intrigue against the throne with the exiled leader of the Nokarodo Faction, Wang Wei. The course of the Second Kildarian Revolution would leave Li Suyi disgusted but also, more importantly, bereft of his pension and the earnings of the Daocheng tea house owned in his name. As such it was fitting that he would seek to ameliorate the threat of dire poverty by seeking a teaching post at the School of the High Inquisitor of Tiegang where, from 1704 AN to 1707 AN, he would each certain elective subjects on the curriculum and serve as tutor for the eldest age cohort of the school. It was through the school that Li Suyi was able to overcome his famous aversion to foreigners, at least to the extent necessary in order to live safely amongst them, by participating in the faculty staff's various initiatory rituals held at the Blackfriars' Redux. These occasions at the local watering hole would also mark the first occasion where Li Suyi had come into direct contact with representatives of the Honourable Company in an environment other than a pain technician's operating booth.