The Apollonia Command is a Florian-led continental theatre command established by the Raspur Pact. A multinational force, it is commander by a Magister-Generalissimus, a special rank reserved only for the senior most allied officer in theatre. 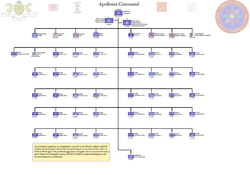 The command structure of Apollonia Command in 1646.

Between 1653 and 1655 the Florian Security Force, Florian Navy and Florian Air Force were incorporated into the allied command structure, however, following the serial defections of the Florian Republic during the course of the War of Lost Brothers, those pathologically unreliable units that remained (mostly grouped in the 5th Army or around naval installations outside Blyth) were disbanded and the personnel and equipment redistributed amongst auxiliary formations under the command of allied Sxiro-Natopian officers.

Fall of Stormark and aftermath