The Fortuitous Immolation, also known as the Fasmas Massacre and the Oustfest of 1707, was a series of coordinated massacres and follow-on purges conducted by a secret alliance of the Talons of the Archon and the Tegong against the ruling Syndicalists of Kildare, and other left-wing public figures, carried out during the month of Fasmas in the year 1707 AN. The extermination of the revolutionary movement in Kildare would ultimately pave the way for an unexpected revolution in Apollonian diplomacy as the new regime would swiftly resolve upon the restoration of Shirerithian neofeudalism and Imperial Sovereignty over Greater Kildare under the terms of the Treaty of Gaelen's Landing, which was signed in the following month.

The conspiracy against the Democratic Apollonian Republic of Kildare had begun almost from the moment of its inception. The Jing leadership cadres had been largely discredited or purged by the relentless succession of events which had overwhelmed the Great Jing Dynasty; the slaughter of the Post-Chidao Troubles, the failure of the short-lived union with Cakaristan, and the subsequent precipitous flight of the nobility in the face of the Second Kildarian Revolution. Each event, a calamity in itself, had proven to be a cataclysm when the cumulative effect was taken on the body politic was taken into consideration. The new and tottering Federal Government was forced to rely upon a mix of junior bureaucrats from the provinces, local politicians from the old scapegoat regional councils, and the representatives of a mutinous soldiery now bereft of their thoroughly discredited Heavenly Light. To lead this fractious assemblage were the returning exiles of the Syndicalist wing of the Society of the Friends of the Revolution, headed by Wang Wei, the leader of the Nokarodo Faction, who would now rejoice in the title of General Secretary of the newly proclaimed Democratic Apollonian Republic.

It may well have been the first decision made by Wang Wei which sealed the fate of his administration. After crashing out of the USSO with the collapse of the Great Apollonian Empire, the General Secretary had turned to his ideological kindred in Sanama and the globalist oligarchy of Hurmu and readily accepted their honeyed proposal the Kildare become a founding member of a new example of that most curious of beasts – a non-aligned alignment that enjoyed the dubious honour of being known as the World Association of Non-aligned Countries. Foir all that the deceptive strategy sought to permit the members to remain outside the Raspur Pact by feigning principled non-opposition to it, enmity and suspicion was nonetheless aroused. In the Mirkdale Peninsula this had the marked effect of permitting the Talons of the Archon, the Humanist Kildari led by Marius Gallo into an Arboreal exile, a sudden and markedly increased liberality with which licence to conduct raids across the line of control into Dalmacija. The Apollonian Continental Theatre Command, long focused on affairs in the far east of the continent – the Pacification of Lyrica, the Barikalus-Hurmu war, and the subsequent Great Vanic Revolt – to turn its attention back to the heart of the continent. Bellicose and expansionist Floria, the ostensible lead nation of the Raspur Pact and a country blessed with a resentment against the Jing dating all the way back to the War of Lost Brothers, had originally seemed ideally placed to strike the killing blow against the Democratic Apollonian Republic. However this strategy would come to nought in 1706 AN as the chaotic Florian invasion of Port Balaine , and the tepid international response, which consisted chiefly of cultural boycotts and economic sanctions, caused the status fixated ruling class of that nation to undergo a crisis of confidence, repudiate the Greater Floria policy and contrive the hurried removal of the president who had been its architect. It was clear that the Pact would have to look elsewhere for the instrument it would employ upon Kildare.

The Tegong had eased the way for the Syndicalists to hijack the Second Revolution from its inception, much to the chagrin of the Humanist faction which resolved to hold itself aloof from the fray. This however had been very much been the project of Shi Pupei, the chief of the Tegong, whose methods of suborning Wang Wei had been personal and intimate to the point of being disreputable in the eyes of many.

Organisation of the conspiracy

Foremost amongst those in the Tegong repelled by the embrace of Wang Wei by Shi Pupe was Li Suyi, Shi's predecessor as chief of the Tegong. Having been ousted from power by a court intrigue instigated by Shi Pupe, and obliged, under the guise of retirement, to go into exile, Li Suyi had already harboured an abiding hatred for his successor that dated back to the accession of the Tobu Emperor. Watching, at a considerable remove, from the vantage point of his exile in Tiegang Li Suyi's contempt hardened into rage as Shi Pupe manipulated Wang Wei into extricating the now former Jingdao from the USSO, now reduced to a vestigial Collective Security Association under Cakari leadership, and instead aligned it with Sanama and Hurmu in a most impure association of their own. With the Heavenly Light effectively confined to the Forbidden Palace of Daocheng, Shi Pupe had, in Li Suyi's eyes. effectively destroyed the foundations of the Tianchaodao in the course of a single year. The Jingdao that Li Suyi had known, loved, and served throughout his entire life had effectively been destroyed. All that would remain to him now was the last recourse - to extract a fitting revenge and to fuel the fire in which the impure would be made to burn for their shameless destruction of the one true and eternal system mandated by Heaven itself.

His years of exile, and the depths of his bitterness over all that had transpired, had brought Li Suyi to a point where, for the first time in his life, he had come to understand the core point of Humanist ideology. Although he still disdained them as vile and inharmonious hypocrites, Li Suyi increasingly understood that it was within this belief system and its adherents, whose poison had seeped into the empire during the Post-Chidao Troubles, was to be found the fuel with which the egalitarian mania, that had corrupted the perfection of Jingdao into the base matter that was Kildare, might be burnt away. His mission therefore was to set the bonfire and to apply the appropriate spark of ignition.

Decapitation of the ruling cadres

The need for compromise

Appeal to the exiles

Restoration of the aristocracy 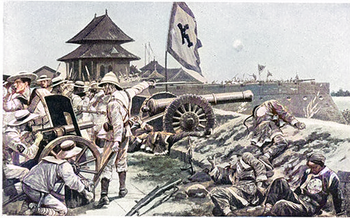 Officials dispatched from Shirekeep and Apollonia Command frequently found themselves beset by restive Jing after their arrival at remote garrisons in the vast Eastern Imperium.

While the end of the syndicalist menace was welcomed with open arms among large parts of the tribesmen and residents of the cities and towns of Qyzylqaystan, soon after the arrival of the first Imperial Commissioners, riots broke out. Shirerithian bureaucracy and offices at the time were spread thin and lacked the manpower to consolidate sufficient power over the newly gained territory. More so, the integration of the more populous and wealthier western parts of Greater Kildare held priority. Henceforth, the officers and commissioners sent, were of - to call it lightly - of dubious quality and morality. Most of them had never been beyond the borders of their own farming village, and now they found themselves in the vast fields of central Apollonia.

Not long after their arrival among the most important townships and tribes, they made themselves unpopular by enriching themselves (vague, new taxes were introduced, without consent of the authorities in either Gürbançybaq, Shirekeep or Gaelen's Landing), rape (the daughter of a small warlord discovered how a Brookshirian soldier had broken into the room of his youngest daughter) and disturbance of public order (reports of desecration of shrines).

Eventually, riots broke out in 1708 AN, after a bar fight in which a Çakaristani merchant was shot dead and - in an effort to intimidate the locals - the bar was set on fire. Protests by Lord Xuan of the Golden Tribe, Duke of Qyzylqaystan, were met with indifference, as priorities among the Imperial government were focused elsewhere. The riots worsened and one tribe after another joined the rebellion against lord Xuan, whom was forced to flee to Jinkeai.

Many of the tribesmen still remembered fondly how the Çakari had fought side by side with them during the Post-Chidao Troubles and had supported anti-syndicalist resistance groups over the years, after the Second Kildarian Revolution. Eventually, by 1710 AN, popular support among the citizens called for joining Çakaristan. By 1711 AN, only a small stroke of land near the Camoleo river remained (these remnants were renamed the county of Camoleo and placed under the Duchy of Jinkeai).