From MicrasWiki
(Redirected from Qyzylqaystan)
Jump to navigationJump to search 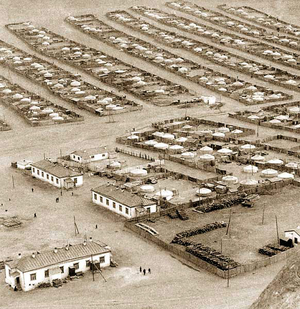 The Qyzyl People's Republic (abbreviated to Qyzylqaystan), Or the Republic of Moving Cities, is a semi-independent syndicalist republic in Central Apollonia. While nominally a nation, its practically a loose union of tribes and cities, spread across central Apollonia. Geographically it borders its parent nation, the Democratic Apollonian Republic of Kildare, Çakaristan and Hurmu. It maintains close ties with its western neighbor, which acts as its de facto overlord. It gained independence during the Second Kildarian Revolution in 1704 AN.

Its population consists primarily of descendants of the Green Tribes whom raided the Lands of Apollo - and later the Great Jing - and Antica. The nomad traditions of its people have still not disappeared, with only a small fraction of the population (mainly Krasnocorian and Jing residents) remaining in the cities during the spring and summer season. Some exceptions exist, like the trade ports in the north and Silafucheng, where a large colony of Krasnocorians lives and handles day-to-day affairs.

Despite its title of people's republic, the worship of the Heavenly Light is still widespread. Many tribes still see it as their duty to protect and spread the Name of the Emperor, despite no longer being a nominal part of His or Her Empire.

The People's Republic is governed by a cabinet of five Secretaries, which was loosely based on the old Jingdaoese system of the Grand Secretariat:

The cabinet member gather in the city of Gürbançybaq and are appointed during the annual meeting of the Revolutionary Menggubao (Yurt) from among its representatives. Due to the large influence of the tribes on the political scene, family members of the most influential families gain a position. However, among its nomads, de facto confinement to living in the city is often seen as a punishment instead of a reward. As such, older members are often chosen to serve, or a far-away family member whom already has chosen the city life above Qyzyl's traditions.

Formally, the Menggubao consists of representatives of the labour unions of the republic. However, due to the nomadic habits of the Qyzyl, and the lack of industrialisation in the region, tribes select an envoy among themselves (not necessarily by vote).

The Menggubao consists of 450 members: 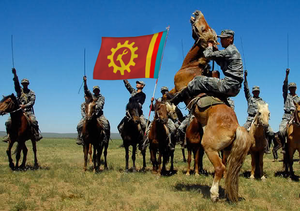 The Qyzyl People's Army acts as a police force within its borders. Every soldier is required to be able to handle a horse.

The Qyzyl People's Army was established during the early days of the Second Kildarian Revolution. Tribesman - and first Secretary General of the republic - Tseren Jobandooh rallied a number of tribes and militias around him. Those who followed him ranged from concerned citizens whom feared the wrath of Heavens if they didn't protect their homes against the revolutionaries, while others sought to protect their tribes against a repeat of the invasion from Cakari forces (several tribes had lost family members during their peace mission during the Post-Chidao Troubles).

The army, consisting of 6,700 soldiers in 1704 AN (and thereafter limited to 5,000), soon swapped sides when a broadcast by the Xinshi Emperor proclaimed Her abdication. A gathering among the Qyzyls most influential tribes-people decided to proclaim independence. Skirmishes along the border with Jingdaoese-Kildarian troops soon resulted in a series of peace talks and the establishment of a people's republic, autonomous from Daocheng but (at least publicly) loyal to the syndicalist doctrines.

While small and under-equipped, it is known as one of the most mobile troops on the continent. Battle-hardened due to its many internal conflicts, they make excellent - but oldfashioned - mercenaries. It is not unusual for soldiers in active service to temporarily go on a sick leave or family visit for a few months and be deployed as mercenary or ranger overseas. The People's Army often acts as both police as military force, as police officers do not operate beyond city borders, and therefore corruption and bribery runs rampant. Nepotism is ingrained in its system, with families trying to gain and keep a foothold among the security forces.

Qyzylqystan was formed from the former Jingdaoese provinces of Jingqyzyl and Nuristan (which was originally divided between Jingdao and Cakaristan, but eventually united). There are 8.008.246 residents.

While in a minority, Jing remain a valuable part within Qyzyl society: in the early days they arrived as envoys of the Heavenly Light, or worked in management functions. It's not unusual to see a Jingdaoese in a high bureaucratic or army job, despite the collapse of Jingdaoese supremacy over the region. They often form the backbone of the small industrial base that the country has. The Krasnocorians and Kildari limit themselves to living in the cities and working on the sparse fields or mines.