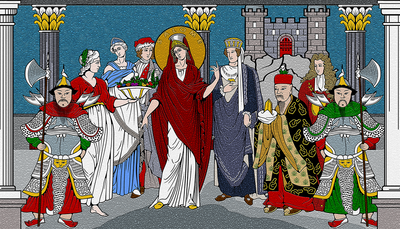 A mosaic of the signing ceremony in Gaelen's Landing. From left to right: Liu Pei, Jia of the Golden Tribe (replacing her father at the last moment), Claudius Nan, Salome (not present at the time, but added at the suggestion of Steward Wythe), Jin San, Lin Lexu, Faustus Tullas.

The Treaty of Gaelen's Landing, named so because of its signing in Gaelen's Landing on 16.VIII.1707 (the formal name of the treaty is, however, Agreement between the Her Magnificence the Kaiseress and the Unified Government of Greater Kildare on the reintegration of Kildare and its territories into Shireroth), is a treaty between Shireroth and Greater Kildare that, once ratified, would reunite Kildare with Shireroth and bring the rest of the former Democratic Apollonian Republic of Kildare under Shirerithian sovereignty.

Moreover, the treaty brings Zijincheng, in the inland of northern Cibola, under the authority of Mondo (with Mondo being reserved the right to secede from Shireroth at any point, as he, as a non-subject of the Kaiseress, is not bound by oaths or loyalty to her). The small island of Sint Barentsz is granted independence, and Alrig is brought under Shirerithian protection.

The treaty was signed by Chrysostom Wythe, Count of Woodshire and Steward of the Imperial Republic on behalf of Shireroth, and Lin Zexu, Imperial Magistrate and Commander of the Eight Gates for the Xinshi Heavenly Light, and by Lord Jin of San, Lady Liu of Pei, Lord Faustus of Tullas, Lord Claudius of Nan, and Lord Xuan of the Golden Tribe for themselves. 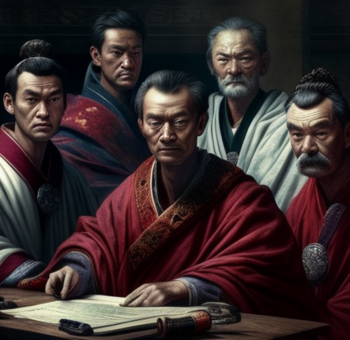 Representatives of both governments signed the Treaty, which brought an end to the independence of Jingdao and reincorporated its territories into the Imperial Republic. 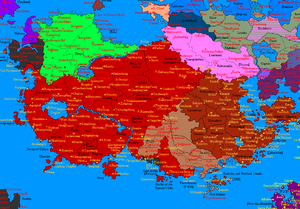 The territorial changes in Apollonia.

Ratification and demonstrations of respect

Greater Kildare forms part of the Imperial Republic of Shireroth. Shireroth extends its imperial dominion to the dutchies/duchies of Greater Kildare and will be responsible for the defence, security, and administration of the protectorates, in accordance with the Imperial Charter and other imperial law and custom.

The laws currently in place in Greater Kildare shall be enforceable only as much as they conform with imperial law.

The independence of Sint Barentsz is recognized.

The Kaiseress makes the solemn promise not to cause the borders of the duchies to change without the consent of the duke in question.

Her Illustriousness the Lady Aurelia Myksos, the Dutchess of Kildare, is thanked for her tenure as Dutchess of Kildare and is relieved of her duties toward Kildare, including the feudal peerage and title over Kildare, and may retire in peace, with the thanks of all Shireroth for her loyalty to the Golden Mango Throne.

In gratitude thereof, Her Illustriousness is granted the title, style and dignity of Dutchess of Vigeland, of Vigeland Street in Shirekeep, and that upon her death or removal from the title, the title shall succeed to her legitimate descendants from her union with Her Illustriousness Lady Sara Eskenderion Avon-El Ayreon-Kalirion, Princess among the Lakes, with preference to older siblings and their descendants over younger siblings and their descendants, with no discrimination on gender.

The precedence of the Duchess of Vigeland shall be counted from 1644, the year when she was bestowed the title Dutchess of Kildare.

The title, style and dignity of Duchess of Jingdao is bestowed upon Her Serenity the Lady Houdezaiwu of Erasmus, the Xinshi Heavenly Light.

The title, style and dignity of Dutch of Kildare, established in 1469, is bestowed upon the admirable Lord Jin of San.

The title, style and dignity of Duchess of Jinkeai is bestowed upon the admirable Lady Liu of Pei.

The title, style and dignity of Duke of Raynor's Isles, is bestowed upon the admirable Lord Faustus of Tullas.

The title, style and dignity of Duke of Outer Antya, is bestowed upon the admirable Lord Claudius of Nan.

The title, style and dignity of Duke of Qyzylqaystan, is bestowed upon the admirable Lord Xuan of the Golden Tribe.

The title, style and dignity of Baron of Zijincheng is bestowed upon the admirable Lord Mondo Etzeterra, Baron Mondo of Lichport. It shall be the right of the incumbent Baron or Baroness to name the next Baron or Baroness before their death or abdication from the title.

The nobility in place in Greater Kildare is recognized by the Kaiseress as nobility in the rank of Barons, Lords in Shirekeep, and untitled Lords, and are granted status, respect, and liberties in accordance with the degree to which their kind and rank has been measured and recognized by the Golden Mango Throne.

This Treaty shall be ratified by the Kaiseress in Imperial Decree, with the advice and consent of the Peers of Shireroth in Landsraad assembled, and for Kildare it shall be ratified by the demonstration of respect between the Kaiseress in Raynor's Keep and Her Serenity the Xinshi Heavenly Light, and the admirable Lord Jin of San, Lady Liu of Pei, Lord Faustus of Tullas, Lord Claudius of Nan, and Lord Xuan of the Golden Tribe.

Done at Gaelen's Landing, in witness whereof, the following plenipotentiaries, duly authorised, have signed, this sixteenth day of the eighth month of the year after the death of Emperor Norton, one thousand seven hundred and seven, and in the year of the Xinshi era, the twelfth, and in the year of the reign of Her Magnificence the Kaiseress, the thirty-sixth.

For Her Magnificence the Kaiseress

Chrysostom Wythe, Count of Woodshire, Steward of the Imperial Republic

For Her Serenity the Xinshi Heavenly Light 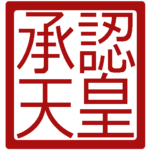 Stamped by Lin Zexu, Imperial Magistrate and Commander of the Eight Gates.

For the admirable Lord Jin of San

For the admirable Lady Liu of Pei

For the admirable Lord Faustus of Tullas

For the admirable Lord Claudius of Nan

For the admirable Lord Xuan of the Golden Tribe